Smith was assigned the female sex at birth but says he always felt like he was in the wrong body.

The 27-year-old Rochester, NY-native, and transgender man says living life with endometriosis while facing ignorance, hatred, and stigma from his peers and caretakers alike, because of his transition, has compounded his suffering from the disease.

“I got my period at 13, and right away I had heavy bleeding and really painful periods,” Smith explains. Six months after his first period, a burst cyst landed him in the ER.

“It felt like a bomb goes off inside your body,” he recalls. “I couldn't see, the pain was so bad it blinded me, temporarily.”

Doctors were dumbfounded. He wasn’t diagnosed with endometriosis until he underwent a diagnostic laparoscopy and ablation (a method, not endorsed by The Endometriosis Foundation of America as an effective means of treatment for endometriosis, in which endometrial tissue is burned) at age 16. He was prescribed rounds of palliative care like birth control pills, progesterone and IUDs to reign in the knee-buckling pain, but he would go on to have four more laparoscopic ablations in five years. He endured death threats and bullying from classmates. But little did Smith know then, his journey with endometriosis was far from over.

After his fifth unsuccessful laparoscopy, Smith began his medical transition with testosterone treatments and by undergoing top surgery, or the removal of unwanted breast tissue to create a more masculine chest. At first, the transition gave him the added benefit he had hoped for: less fatigue and the cessation of his painful periods.

Eight months in, “I started having breakthrough spotting, which is really uncommon in trans men who have been on testosterone for that long,” he recalls. “I started having cramps again. I started having this shooting-electricity-feeling down my legs, which for me, is a sign that endo is present.”

As the endo continued to rage, he soon learned that sitting in his OB-GYN’s waiting room, as a trans man, was another source of discomfort.

“When you're sitting in that waiting room, looking like a man, and then someone brings you your clipboard, and you're filling it out, I mean people are staring at you, like, Who is this person? A lot of trans men in general, a lot of them will completely avoid going to the OB-GYN just because it's a female thing, and it gives them a lot of anxiety and a lot of stress.”

Desperate for relief, Smith, then 21, decided upon a hysterectomy. (The Endometriosis Foundation of America does not endorse the procedure as a definitive method of treatment for endometriosis. "If there are fibrosis and nerve involvement due to endometriosis, hysterectomy will fall short of addressing the problem of pain," says EndoFound Co-Founder Dr. Tamer Seckin, who has not treated Smith.)

But first Smith began the process of egg freezing, to help him fulfill his lifelong dream of parenthood. Despite his testosterone treatments, he was able to salvage 14 viable eggs.

The joy of that success was short-lived. The hormones he took to stimulate his ovaries turned them “the size of grapefruits,” he says, and in November 2014, he rushed to the ER of the University of Rochester Medical Center (URMC). Once there, he claims doctors diagnosed him with ovarian hyperstimulation syndrome (OHSS) and ovarian torsion, or the twisting of both ovaries.

However, Smith claims his treatment at URMC was transphobic and disrespectful. In November 2017, he filed a $750,000 civil lawsuit against the hospital. According to the suit, a doctor performed one oophorectomy each in two separate, back-to-back surgeries during his two-day stay. When Smith says he awoke from the first surgery with the remaining grapefruit-sized ovary, he alleges in the lawsuit that he was denied pain medication and was forced to undergo an excruciating transvaginal ultrasound in front of gawking nurses. He claims the doctor did go back in to perform the second oophorectomy, but that the doctor denied him a hysterectomy—which he was scheduled to undergo two weeks later—allegedly telling Smith that he "didn't feel comfortable aiding in [his] transition." Smith claims he woke up from the second oophorectomy with a bowel obstruction and an ileus, or a painful obstruction in the small intestine. 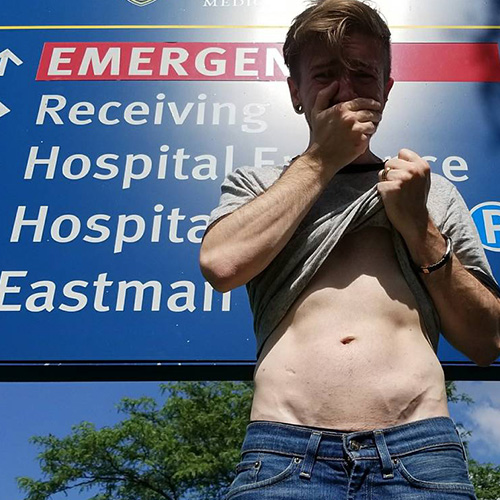 In his lawsuit, Smith alleges his caretakers at URMC discriminated against him because of his transgender status, and as a direct result, he claims he suffered trauma and humiliation, and, in the wake of his discharge, loss of enjoyment of life, physical and emotional pain.

A URMC hospital spokesperson tells The Blossom, "UR Medicine believes that Mr. Smith received appropriate medical treatment at Highland Hospital (a division of URMC) in response to his need for emergency care in November 2014. This is based on a thorough review of the medical record by clinical professionals on Highland’s patient safety team, a review which included interviews with Mr. Smith’s attending physicians and other caregivers." The spokesperson added that the hospital has since implemented measures to be, "more sensitive to and affirming of the needs of transgender and gender nonconforming patients, without compromising quality or safety of care."

A Future Fraught With Pain

Smith has since had his scheduled hysterectomy, and he says he is grateful that he and his fiancé, Deon Young, will one day be able to have biological children via surrogacy. Despite that happy news, Smith claims the mismanagement of his ovarian hyperstimulation syndrome has had devastating effects. “I still have pain today," he claims, adding that he experiences urination problems, and visits his OB-GYN for nerve blocks and trigger point injections for pain management. He says he hopes to one day have excision surgery to remove old scar tissue from his ablations.

Still, Smith says he's remaining positive and has channeled his energy into supporting other trans men who struggle with being a part of the endometriosis community.

“Don't think of it as a female problem,” he shares.

And he has a strong message of support for endo women. “Testosterone, it almost felt like a cure for a little bit, and I felt that, but at the same time, we're still suffering alongside you because even though we're not getting our periods anymore, necessarily, we're still living with those after-effects as well. So we really are right there with you.”

Feeling On Edge? These Stress Management Tips May Help Your Endometriosis

Ask Harry: How Do I Find The Right Endometriosis Doctor