Update: Hours after this story was published on The Blossom, Australian Health Minister Greg Hunt announced that he would allocate an additional $2.5 million to endometriosis research. "We are determined to do more to support endometriosis sufferers around Australia," Hunt said in a statement.

When Australian Health Minister, Greg Hunt, made headlines for announcing a National Health Action Plan for endometriosis in December perhaps no one was more shocked than Sylvia Freedman.

The 27-year-old, who experienced a 10-year delay in her endometriosis diagnosis, was in the middle of lobbying the Australian government on behalf of her grassroots endometriosis advocacy group, EndoActive, when Hunt made the surprise announcement.
“First of all, he apologized, he said, 'I’m really sorry that this has gone unnoticed for so long,' and it was just a very powerful moment and a lot of people were in tears," Freedman tells The Blossom.

Hunt's action plan detailed a $160,000 grant for endometriosis-based research and a call for better treatment and more awareness for the estimated 600,000 Aussie women with the disease. "It was a huge step. From [EndoActive] going to a little Facebook page in our lounge room, managing in our pajamas, to being invited to Parliament house.” 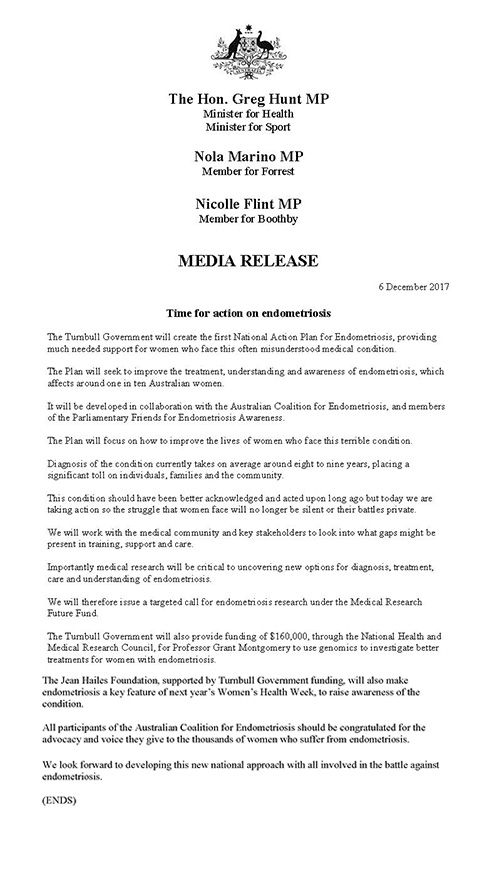 So how did she help make national history a mere three years after forming EndoActive? Seemingly the tides of change had begun to move in her favor long before December, because government officials were already receptive to ideas from endometriosis thought-leaders.

Six months before Hunt's announcement, “politicians Gai Brodtmann and Nicolle Flint had formed a bipartisan group, Parliamentary Friends for Endometriosis Awareness," recalls Freedman. "They found out that there were all these groups in Australia working independently and they said, 'we want you to come together as one voice.'" That meeting, says Freedman, gave rise to the joining of multiple endo groups, which would later call themselves the Australian Coalition for Endometriosis (ACE). The ACE then created a list of priorities and demands before they spoke to Parliament.

It's a work in progress, but Freedman is hopeful that the best is yet to come for her and Aussie endo women.

“If the priorities are actually acted upon, there will be a national public awareness campaign to really push for the public to know, to have heard the word endo. We asked for clinical guidelines to be updated so that clinicians have a really good understanding of endo, and research funding, awareness, education, and clinical care have the potential to make a huge difference to the way women with endo are treated and reduce the delay in diagnosis.” ACE also asked to integrate endometriosis into public secondary school curriculums, a project already piloted in Southern Australian schools through Endometriosis New Zealand’s education program.

What are Freedman's tips to spark an endo revolution right here in the states?

"Endo is a huge cost to society. The government will do things if it looks like they will save money. And that it has such a high prevalence, other diseases with a much lower prevalence are getting funded." And she says strength does come in numbers. "Come together all of you, as many as possible, because that’s where you have the most power and the most reach. Forget the politics, forget the competition, that’s when you’re going to be heard. It wasn’t easy you know, we were not all in agreement about what should be done, but we did eventually and look, it’s done.”

Looking for Endo-friendly Beauty Products? Here's What You Need to Know!

Diana Falzone's Pregnancy Surprise After Two Endometriosis Surgeries: "Every Night I Prayed for my Baby"