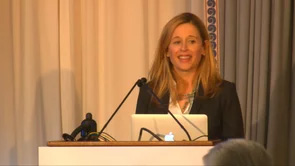 Thank you for having me. I am not a fertility doctor, I specialize in minimally invasive GYN surgery but I see a lot of patients with endometriomas and I feel like it is becoming increasingly difficult to counsel them because there is a lot of data coming out and it is kind of confusing to get through it all and make sense of it.

I am sure everyone in this room knows what endometrioma looks like. We see endometriomas in about 20 to 40 percent of patients with endometriosis. Endometriomas usually imply pretty horrible endometriosis, usually stage three, stage four endometriosis. What do we know about endometriomas at baseline and their impact on ovarian function? Endometriomas create or within an endometrioma there are all sorts of, on a basic science level looking at the cellular and molecular makeup of the contents of the endometrioma, there is free iron, reactive oxygen species, lots of inflammatory molecules that can impact the surrounding tissue. There is a very thin layer between the cyst itself and the surrounding normal ovarian cortex and we think that that can have all sorts of changes or impact on the surrounding normal tissue. It can induce DNA mutations, impair angiogenesis, changes in gene profile, hormone receptivity, hormone biosynthesis and creates this oxidative stress and iron.

We know looking underneath the microscope at the normal ovarian cortex around the ovarian endometriomas versus that of teratomas versus cystadenomas we see around the endometrioma decreased follicular numbers, less frequent follicular maturation up to the antral stage and increased microvascular injury and decreased blood perfusion. There are other ways of measuring ovarian reserve; the most common things being looking at the antral follicle count, anti-mullerian hormone and also ovulation rates. This is just endometriomas at baseline. This is not talking about surgery.

Now, let us talk about surgery. We already know that endometriomas can impact function but what about if we then throw in surgery? Again, looking at the pathology from ovarian tissue that has been removed at the time of cystectomy in more than 50 percent of pathologic specimens from ovarian cystectomy for endometriomas more than 50 percent of the time there is normal ovarian tissue around that is very different than doing cystectomies for other non-endometriotic cysts where usually a much smaller percentage, six percent, will have normal ovarian tissue around. We all know from doing cystectomies in endometriomas they are sticky, they are tough to get out sometimes, sometimes it is really difficult to find that plane so it makes sense that you would see this corresponding in the pathologic specimens.

Also, there are some studies, nobody likes to air their bad outcomes, but there are several studies looking actually at the risk of ovarian failure after cystectomy for endometriomas. The 2.4 percent risk of post-surgical ovarian failure is from a study in 2006. It was a retrospective analysis of all patients that had undergone surgery for endometriomas and followed them for an eight year period after the surgery. Two point four percent or three of them, it was 126 patients, had immediate post-op failure. Of those patients that had immediate menopause those three all had bilateral, one patient had multiple endometriomas on both ovaries. They were all in their 30s. Aside from that there was really not much difference.

Another study in 2011 prospectively followed 302 patients over 14 years who had undergone laparoscopic surgery for endometriomas. Again, the mean age was in the 30s. They followed them for an average of eight years afterwards. In that eight year period 14 percent of patients entered menopause. The average age of menopause of those patients undergoing menopause was 45, which we know is much younger than the average age typically that we see in a normal population. Those people that did go into menopause, those that had bilateral endometrioma excision, the average age of menopause was 42. In those removing unilateral the average age was 47. Of those patients that did enter into menopause it was a very similar number to the previous study, about 2.3 percent were considered premature ovarian failure. It is a real risk that often is not recognized and not well reported.

Also now looking at endometrioma cystectomy on ovarian reserve by measuring anti-mullerian hormone, there was a meta-analysis in 2012 where eight studies were included including 237 patients. The mean endometrioma diameter was 3.7 to 6.7 cm. There was a statistically significant decrease in AMH after ovarian cystectomy. They then further looked at this data to try and exclude any confounders and they controlled for age so they only looked at the patients who were aged less than 40 so excluding those patients who were 47 like maybe they were more likely to have a bigger decline. They only looked at the patients who were less than 40. They then also looked at size. Maybe size has something to do with it and only looked at the endometriomas greater than 5. They also looked at the baseline AMH so maybe if it is really low to begin with and you then peel out an endometrioma maybe they are more likely to have a bigger decline. But even controlling for all of those there was still a statistically significant difference in decline in that AMH level.

It appears that the rate of AMH decline does not correlate to age, laterality, cyst diameter or the number of primordial follicles at the get go.

We care a lot about AMH and antral follicle count and it gives us some sort of numerical numbers to work with and counsel patients. But what we really care about is how does this translate to conception and pregnancy? It is very confusing. One study says one thing and the next says another and it is a bit all over the place, so there is a lot of questions and a lot of research still to be done.

I am going to talk about this recent meta-analysis in 2015 looking at the impact of endometrioma on IVF and ICSI outcomes, so not spontaneous pregnancy just IVF and ICSI. This looked at sub-fertile women with endometriomas who have or have not undergone surgery and the plan for IVF or ICSI. Thirty-three studies were included, 30 were retrospective, three were randomized controlled trials. Compared to women without disease those women with endometriomas, while doing IVF and ICSI not spontaneous, had similar live birth rates, similar clinical pregnancy rates, lower mean number of oocytes retrieved and higher cycle cancellation rate. Compared to women with no surgical treatment, women who had their endometrioma surgically treated prior still had similar live birth rate, clinical pregnancy rate and mean number of oocytes retrieved. Similar outcomes in women with and without disease, surgical treatment did not appear to alter that outcome and it appears that reduced ovarian reserve may be attributed to the presence of the endometrioma more so than the surgery itself.

This is another study looking at the long term reproductive performance. They looked at outcomes by questionnaire, so take that with a grain of salt because we all know the problems inherent with sending out a questionnaire and working off the answers. They looked at 68 women with previous endometrioma surgery and they had an age and weight match control. In general, this does not have the control group on there, but compared to the control group women with endometriomas had a much lower conception rate. The spontaneous pregnancy rate did not appear to change in this study with surgery. Surgery did improve the – this is different than the last where in this study the surgery did appear to improve the success with IVF but overall the pregnancy rate was much lower than again a controlled, non-endometriosis population.

So is there anything that we can do to potentially minimize damage to ovarian tissue? There are a lot more studies coming out about this and I do not get much into the nitty gritty details but as Dr. Seckin had alluded to yesterday it makes sense if you fry an egg that it is probably not so good for the egg. There are several studies comparing bipolar to suturing to using various hemostatic agents and it does appear that suturing and hemostatic agents are probably somewhat protective for reduction in ovarian reserve, which again makes sense if we are not frying ovaries.

In all these studies there does appear to be, there is a greater rate. All of them with cystectomies in general there is always a decline in ovarian function but it appears to be less with the hemostatic agents or with suture.

It is a very difficult – lots of things to take into consideration when you are counselling a patient and you have to take various factors into consideration; number one the symptoms. Even if we know that it can have potentially negative impacts on ovarian function if someone is horribly symptomatic then we often have to intervene with surgery if their symptoms cannot be controlled medically. Also size and appearance, if there is any question of malignancy then obviously we are not going to, within reason, manage them conservatively. Also depending on their childbearing wishes, if you can control someone’s symptoms medically then you might be better off delaying the surgery because we do know that with repetitive surgeries there is a high risk of endometrium recurrence. If you do a resection of endometrioma and then two years later that is when they want to get pregnant and they have recurrence then repetitive surgeries definitely have a big negative impact on ovarian function. You have to take that timing into consideration, also, the feasibility of assisted reproductive technology. There are a lot of issues that came up with the concern for endometriomas whether you might seed the belly, whether you increase the risk of developing infected endometriomas by going through those endometriomas, if you can rupture them, if you contaminate the embryos with that endometriotic fluid. There is a recent study that came out looking at those things and really those risks are extraordinarily small but one thing that is often true is the feasibility. If you cannot get to the ovaries because their pelvis is cement and the ovaries are located in some crazy position then you might not physically be able to access the ovaries.

In conclusion, endometriomas are associated with a decreased ovarian reserve at baseline. Surgery further decreases that reserve and it seems to be irrespective of size, age, laterality, surgical technique or skill though there are some things that can be done to minimize the effect. Patients with endometriomas have an overall decreased spontaneous pregnancy rate. Assisted reproductive outcomes may not be affected by surgery and we really have to be very careful with the way we counsel our patients and use very careful surgical technique. 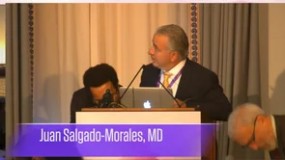 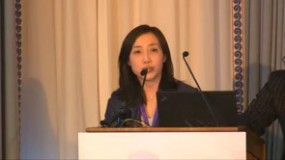