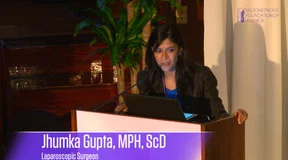 Thank you Lone for the introduction. I just wanted to start off by thanking the most important people in the room today and those are the women and girls who have endometriosis, so thank you for being here. I also wanted to thank Dr. Seckin and Terry and everyone else at Endofound for hosting this very important event for patients.

I am going to start off by telling you a story. I am going to take you back to the year 2010. I was about to launch a research study, a randomized controlled trial funded by the World Bank and it was to reduce violence against women in the Ivory Coast. That is a small West African nation that borders Ghana. The stakes were really high. The country was about to erupt into another civil war and I needed to get a security briefing each morning to make sure it was safe enough for my research team to leave the hotel. The road conditions were harsh and the atmosphere was tense. But believe it or not, this was actually normal in my line of work.

Many people often ask me why I am an epidemiologist, why I chose this area of public health research to go into and if it was simply because violence against women was something that affected me personally. I usually respond with violence against women is a societal problem that affects everyone, so yes, I have been affected. Haven’t we all? But I will give you a brief glimpse into some other aspects of my life that very few people were able to see.

During the same work trip I was just four weeks shy of my third excision surgery with my second excision specialist. I was sitting in a rural village that bordered Liberia in excruciating pain. Every morning I would leave for the field feeling like my leg was being sliced up. We were sitting in these huts, the places where people lived and that is where we collected our data. I would eyeball to see where I could vomit discreetly if needed. In the evenings I would Skype with my husband and hold back the tears of pain. I do not think I really need to go into that many more details about what it is like to live on a day-to-day basis with endometriosis because most of you already know that.

But I never really shared what was going on inside of me with any of my colleagues, most of whom were public health experts and who would self-identify as feminists. I did not even tell them I had surgery coming up in a few weeks after we got home. My friends and family they would describe me as nothing short of brave for going into a war zone to try to fight violence against women. But the truth is I did not really feel I had the energy to be brave at that point and I certainly did not feel it because I was already conditioned to being preferably unheard. It is this conditioning that plagues so many women’s health issues whether we are talking about violence against women or if we are talking about endometriosis.

While the scarring and the organ damage – that happens because of the physical pathology of the disease – it should be noted it is the social pathology that has bred the silent epidemic of endometriosis.

There is a ten year diagnostic delay and the vortex of uncertainty does not just magically go away upon diagnosis. Nor does it necessarily go away if you are sitting in front of the right surgeon. It is not because women are not trying to get help. The lack of urgency when it comes to endometriosis can be best summed up by one of my favorite authors who is a well-known social justice advocate, Arundhati Roy, who states, “There is really no such thing as the voiceless, there is only the deliberately silenced or the preferably unheard”.

Organizations such as Act Up, which stands for the AIDS Coalition to Unleash Power they were formed and they challenged positions of power. They challenged the FDA and the NIH, elected officials and researchers to demand better access to drugs and to make better use of AIDS/HIV research funding. They changed the way that things were done so that the preferably unheard, which included women as well as gay communities and people of color could benefit. They organized themselves really well and staged very public demonstrations and they shut down media offices as well as international medical conferences that focused on AIDS. They even managed to shut down Cosmo magazine when Cosmo erroneously printed that heterosexual women cannot get HIV.

So thanks to their efforts in challenging power life-saving drugs became more affordable and better care for women living with HIV was made possible.

I have had discussions with a veteran Act Up member who is a colleague of mine. He now runs the Yale Global Health Justice program. We have actually talked about the current state of endometriosis and how it is really barely made a dent in the public health psyche. What he says is that in order to get people in power to pay attention and prioritize their issues you really need to strike some fear into their hearts. You need to act up, fight back and fight endometriosis. A little anger and a little rage can go a long way for social change.

To do this, one of the most important things we can do is be very upfront about what currently needs strengthening in the world of endometriosis. Just as endometriosis can be easily missed in medical appointments there are entire groups of patients who have not been fully incorporated into the medical management or advocacy efforts pertaining to this disease. This includes women of color, lower income women, transgender patients and lesbian women. This includes women who despite multiple attempts at quality excision surgery continue to have very severe symptoms of endometriosis.
These stories are being told but they are just not being fully listened to. And frankly, learning from these women can help strengthen what we know about endometriosis and help move the cause forward. None of these things are or should be divisive.

In some settings where I work infertility, which is common among endometriosis patients can actually make women vulnerable to experiencing violence or abandonment from her husband or in-laws. That is the type of language we need to speak to get the ears of the public health world.

For me I am excited to say that along with Endofound my research team has launched a pilot study with teen boys and girls right here in New York City public schools. The study is being done to examine how general samples of adolescent girls and boys perceive symptoms of endometriosis and related stigma. The population is primarily teens of color. Some of the most compelling findings are that what teen girls are telling us, and mind you these are not teens who necessarily have endometriosis, but what they are telling us is that it would be more stigmatizing for a young girl to discuss painful sex with her boyfriend than it would to negotiate using a condom. And that it would be more stigmatizing for a young girl to seek help for GI symptoms related to endometriosis than it would be to seek help for alcohol or drug use. Why are these findings so compelling? Because the prevention of alcohol and drugs, and the promotion of sexual communication in teen relationships are some of the most pressing public health priorities in this country. We now have preliminary data suggesting that according to teens that endometriosis might be as stigmatizing and as difficult a problem to navigate but the difference is endometriosis lacks the public health infrastructure and lacks the public health dollars. This is an incredibly important message for the public health world.

Moving forward what we hope to see is the use of these data to develop initiatives to address the stigma associated with endometriosis. In my work using research we have developed initiatives where we try to get violence against women to be seen as a societal problem, so that anyone can take ownership of the problem of violence against women and so that anyone will feel compelled to speak up about it or prevent it. We also have initiates where we try to shift the shame so that a young girl or woman who experiences sexual assault is not the one who is shamed. But we try to shift the shame on those who try to dismiss her. This is what I would like to see for endometriosis.

In the not so distant future I would like to see teens, schools and workplaces take ownership of the problem of endometriosis so that anyone can speak up when they overhear others say that endometriosis is not a real disease. Or that they will speak up when a young girl or woman is criticized for not going to school or able to keep up with her work because of endometriosis symptoms and others characterize her as lazy or attention getting. I want to see one day where anyone when they are asked why they advocate for endometriosis and whether they do so because it is a personal issue. I want more people to say endometriosis is a societal problem that affects everyone. So yes, I have been personally affected, haven’t we all? Thank you. 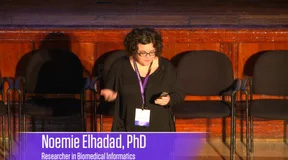 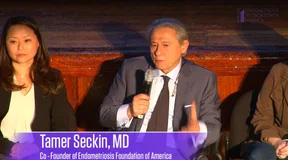