Looking back, I can't remember a time I was not in pain.

There are holiday snapshots of me in exotic places, sporting a forced grin for the camera. I was in my early thirties when I finally was diagnosed with endometriosis.

Shortly after, I moved to the UK from Belgium, my country of birth, to be with the man I loved. Trying for a baby felt like the most natural next step. Yet treating the disease and trying to conceive seemed mutually exclusive and the irony was that I kept hearing pregnancy might be the best cure for my painful condition. I did fall pregnant, twice. Twice I miscarried, for reasons most likely unrelated to the endometriosis.

A good friend of mine gave me some advice: keep children at the center of your life and turn your tale of agony into fiction. My friend turned out to be right. As I started to work with young children and to plan my novel, the fog lifted. Flow was finally published in Dutch in 2013. I now live a content, pain-free childless life in an idyllic place by the sea with my husband Pat and my dog Carlos. I have managed to translate Flow into English, and I can't wait for my endo-sisters to tell me what they think.

In the book, Raf and Emma are ready to start a family, but this proves easier said than done. After years of fertility treatment and disappointment, they try to accept their fate and confront the prospect of a childless life. ‘Flow’ is a novel about survival. It’s about the role of friendship in dealing with loss and about the boundaries of what men and women are able and willing to share in their relationships. 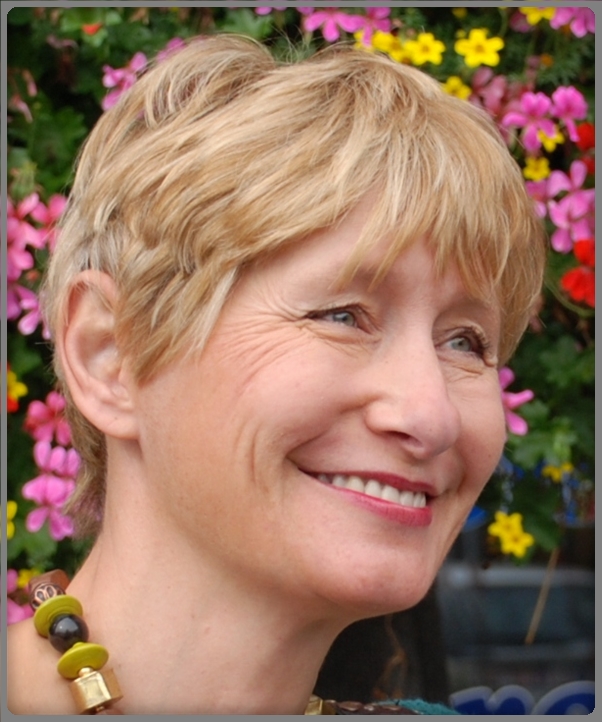 Above, author Lief Achten finds joy after her infertility struggle

Mothers with huge bags, mega bags packed with baby stuff, intrigued me. The bags more than anything. Bags with mums in parks and on trains, at the airport and at the swimming baths and at the doctors. Bags with mums on beaches and in elevators. Bags with mums visiting other mums. Dragging mums with massive bags full of alluring stuff, prepared for every whim, every need, every inconvenience imaginable of the child to be pacified. Had the divine provider’s providence kicked in together with the FSH-hormone? I had started to wonder if or how I would ever know how to best fill such a bag. Would the design, the texture and colour of such a baby-essential-recipient still be a concern or would I have my priorities sorted out by then?

No one ever believed me when I said I longed for a universe in which my own needs and desires had become secondary.  Meanwhile I had four miscarriages behind me. After "the product" of the second conception had been spontaneously aborted, as they say in medical terms, at ten weeks, Raf and I tried, for over a year to make a new baby, to no avail. At our wit’s end we consulted the GP, who concurred with our urgent need to call in specialised fertility assistance.

Two failed IVF attempts later I was almost thirty-nine. The medics however, remained incredibly optimistic, almost more than optimistic. After all my reaction to the drugs in both IVF treatments had been very encouraging, indeed. I had managed to conceive, hadn’t I? The mere fact that the embryo of respectively ten and nine week’s gestation had been expelled, did not question the success of the treatment. If it hadn’t been for the child-unfriendly shape of this womb of yours, you’d most definitely had been a mother by now ma’am, was how one of the consultants put it.

I was in too much pain to respond and had become oblivious to the numerous tactless faux-pas. When my second pregnancy had started to go wrong while Raf was in the Netherlands for a job, I had admitted myself to the Accident and Emergency department of our local hospital, after a taxi ride from hell. The locum, a young Greek consultant, informed me in broken Dutch there was no more heart beat but I needn’t worry, he would make sure to dispose of "the product" promptly. When he noticed the tears running down my cheeks he seemed puzzled and asked me what was the matter. ‘I’m sad’, I said. ‘O yes, sad,’ he repeated, as if making a mental note to store the notion for future reference.

The doctors decided to surgically remove the septum which divided my uterus in two. Hopefully this reversal of my womb’s heart shape would increase not only my chances to conceive, but to carry a pregnancy to term. However, during the operation it became clear that the hormones I had taken in order to stimulate my ovaries to produce more eggs, had more than tripled the so-called chocolate cysts and the endometriosis had now spread to my bowels. I carried my very own chocolate factory but it was no laughing matter, the pain was constant and worse than ever. The fact that I no longer seemed to register it was testament to my eagerness to please everyone, but more than that, to the price I was willing to pay to have a child. I was doubled up with pain and horrified by the prospect of more follicle stimulating hormone treatment. But luckily that wasn’t an immediate worry. In order to shrink the endometriosis and relieve the pain I was told I could start a different type of hormone treatment, which would temporarily trick my body into the menopause, during which time I would be infertile and "only" suffer from menopausal symptoms. I was confronted with an impossible dilemma: choosing to be free from pain and the worries about conceiving for a while was a tempting prospect but it meant I would be putting my fertile years on hold. Choosing to try for a baby implied physical and most likely mental agony too. I was stuck: I wanted quality of life and I wanted a child. At that point, regaining the former seemed more pressing. Subconsciously I must have secretly longed to get away from the fertility circus, albeit for a while, for I grabbed my chemical menopause with both hands.

Raf had never been willing to consider adoption or surrogacy, so I knew I had to ready my own body for potential further battles. In the end, with less endometrioses my chances to become pregnant would increase. And even though my body did not seem to share my obsession with pregnancy, at thirty-nine I entered menopause with renewed militancy. I tolerated hot flushes, night sweats, sleeplessness and headaches and regarded Raf’s romantic advances with the clinical distance of a sexual anthropologist.

By now, as an actress, I had been out of work for more than a year and a half. Two years earlier I had been regularly stopped in the street by people wanting a signature of "Neeltje," my character in a popular Flemish youth series. Now I was a minor celebrity at best. For more serious work I was no longer approached either; after my first IVF-miscarriage I had needed to pull out of a production of Lorca’s ‘The house of Bernarda Alba’, just when the company was about to embark on a tour of The Netherlands. My professional name was tainted.

I was fed up with my interim life.

It seemed for years I had been waiting for something to begin, as if all I did was a mere means to kill the time. I was fed up with myself, with sex on command, with my squabbles with Raf, with fertility clinics and my own worn out pain monologues and hysterical outbursts which invariably ended up with me, all wrung out, leaning on Ayane’s ever available shoulder. And hope, I was especially fed up with hope.

And yet Raf and I continued to try and to dream and to long and did our best to erase distressing memories of past ordeals. We were whizzing round in circles on a carousel that we were unable to stop and those around us did nothing but increase the speed. The expensive doctors with their promising prognoses, who treated me with the respect afforded to a race horse on its way to ultimate victory, my sisters, my parents, all of whom showered us with hang-in-theres. My mother dreamt I was dancing on a roundabout with a small red-haired girl on my shoulders. Wasn’t that a sign?

“Flow” by Lief Achten is available on Amazon.

Endometriosis, while not a death sentence, is a sentence to a life in pain: Eileen Hedger's Endo Story

A Thousand Fractures: A Short Story