We're thrilled that last night, the United States Senate passed HR 2471, the FY22 Consolidated Appropriations Act. The next stop is the President’s desk for his signature making this a law. This legislation funds the federal government for the rest of the fiscal year and includes the primary federal programs that fund research of endometriosis: the National Institute of Child Health and Human Development (NICHD) and the Department of Defense’s Peer-Reviewed Medical Research Program (PRMRP).

The efforts to prioritize research for endometriosis was led in the House by Rep. David Scott (GA), Rep. Kathleen Rice (NY), Rep. Nikema Williams (GA), and Resident Commissioner Jenniffer González-Colón (PR) and was supported by the bipartisan Congressional Endometriosis Caucus which is co-chaired by Williams and González-Colón. We look forward to continuing to work with the House Caucus, Senate champions, and the Biden Administration to prioritize research and awareness in the next fiscal year.

“What a bright spot in an otherwise dark period," said Padma Lakshmi, co-founder of EndoFound. "I’m over the moon that Congress is continuing to take this devastating disease seriously. This is exactly why I started EndoFound thirteen years ago with my surgeon, Dr. Seckin. Endometriosis Foundation of America has been working tirelessly since its inception to increase federal research funding for a disease that affects millions of Americans. Today we see more fruits of that labor. Thank you to the House Endometriosis Caucus for carrying forward this long-overdue correction to how we regard women’s reproductive health issues.

A 2016 lunchtime briefing in the Hart Senate office building was only one stop during Lakshmi’s packed day of lobbying (also on her daybook were meetings with lawmakers, including senators Chuck Schumer, Elizabeth Warren, and Kirsten Gillibrand).

“EndoFound and our new UpEndo Coalition were happy to support these efforts to prioritize endometriosis research with key federal agencies and the development of the Congressional Endometriosis Caucus,” said Dr. Tamer Seckin, co-founder of EndoFound with Padma Lakshmi. “Money for research will help us to diagnose endometriosis at earlier stages. Early detection is the single most effective path to prevention from loss of quality of life due to suffering from pelvic pain and infertility.”

"I worked for more research funding and helped start the first Endometriosis Caucus when serving in the House so I'm so happy to see new champions step up," said Abby Finkenauer, Candidate for US Senate, Former Congresswoman, and EndoFound Ambassador. "Thank you to Reps. Nikema Williams and Jenniffer González-Colón along with Reps. David Scott and Kathleen Rice for their efforts. With new resources dedicated to endometriosis research and bringing more attention to this debilitating illness in Congress and our communities through the UpEndo Coalition, we can help more women feel less alone and get the diagnosis and treatment they need to help manage this disease and have a better quality of life."

Actress and Endo Advocate Amy Schumer said, “I recently underwent surgery to have my uterus and appendix removed to alleviate my debilitating endometriosis symptoms. This might seem extreme, but it was the best choice for me. I cried as my doctor told me I had a tumor in my endo-ravaged appendix. Chocolate cysts in both ovaries. Endo of the uterus, and PCOS all over. And do you know what? There is still not enough research on this s--- to find a cure. This disease impacts 200 million women worldwide. Now, thanks to the work of so many -- Congress is finally prioritizing endometriosis! Of course, we have much more work to do, but damn, this is a good start."

Diana Falzone, EndoFound Ambassador and EndoTV Executive Producer and Host said, “Endometriosis impacts the lives of 1 in 10 born with a uterus yet there is no cure. It is one of the leading causes of female infertility, a known precursor to ovarian cancer and the primary reasons individuals ages 25-34 have hysterectomies. It costs $78 billion a year in healthcare costs and lost wages and guess what? There are no simple screenings or treatments. There is no cure. Through new attention and research funding we could change that. By working together with our champions in Congress and the medical community we can bring hope for a healthier tomorrow.” 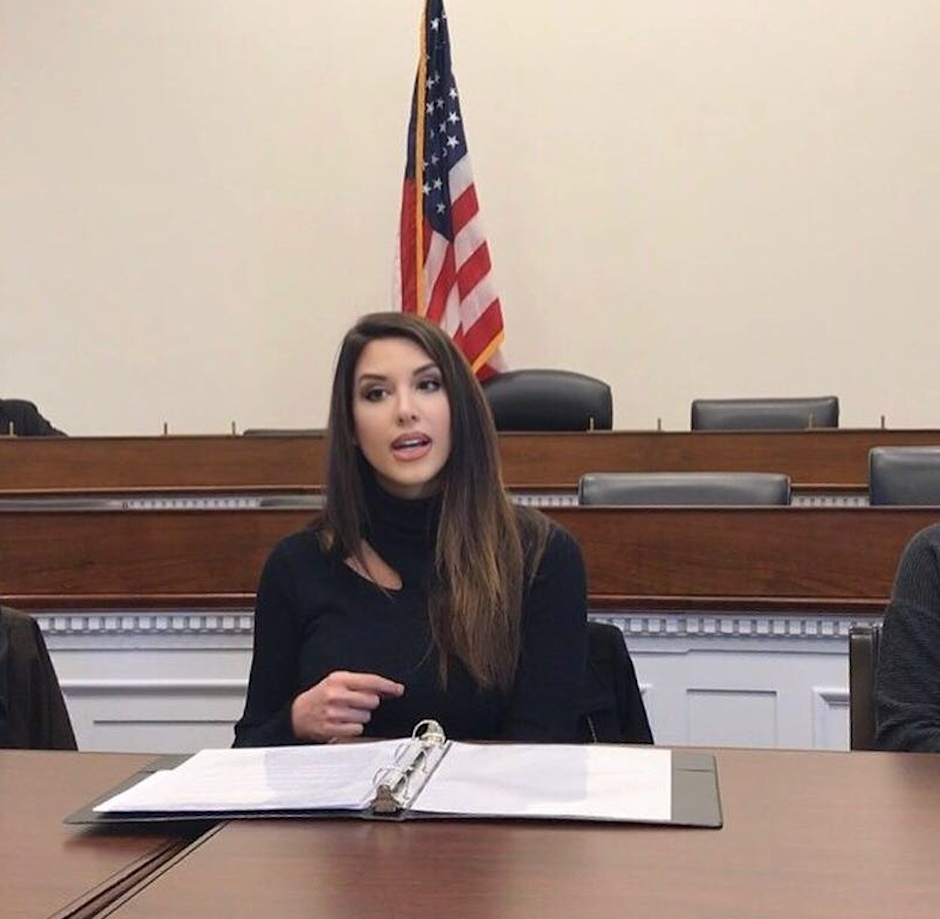 EndoFound Ambassador Diana Falzone speaks on Capitol Hill in 2018 about endometriosis. Along with EndoFound Co-Founder Dr. Tamer Seckin, they had meetings with Congressman David Scott (D-Georgia), a visit to Senator Warrens's office, a meeting with former Senator Orrin Hatch and staff from several senators' offices.

"Endometriosis has been a part of my life for too many years and has led me to advocacy and my work with EndoFound.  This news is groundbreaking because it gives us hope of someday finding a cure, and finally, our voices are long-last being heard, and others now know that this pain is 'no longer in our heads,'" said Alaia Baldwin Aronow, EndoFound Ambassador.

This is a major victory in the endometriosis community, and we must keep up the momentum. Ensuring that endometriosis continues to receive priority consideration for federal research is of the utmost importance to EndoFound. Thanks to so many of our determined adovcates and geneorous supporters, the UpEndo Coalition was able to work with Members of Congress to ensure federal research of endometriosis is at the forefront.

Here are some ways that you can make your voices heard:

Thank you to our community, the Congressional Endometriosis Caucus, and the UpEndo Coalition. Together, we will create a world without endometriosis.

How I Fundraised for Endometriosis by Running the Rock ‘n’ Roll 5K (You Can Do It, Too!)