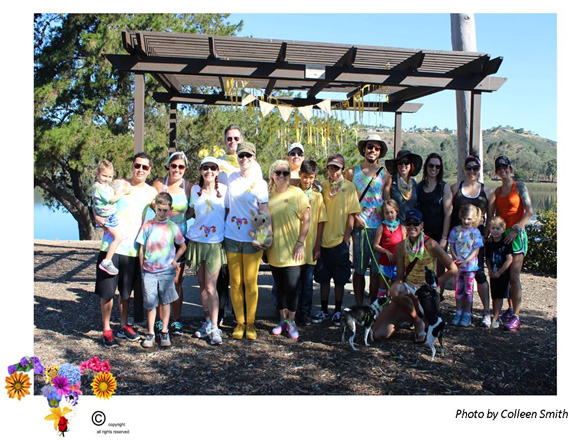 The Bloomin’ Uterus Endometriosis Awareness and Support Walk was a 5-mile walk that we did around Lake Miramar in San Diego. For every $10 that was donated, we walked 1 mile. A few of the attendees had Endometriosis, but many were there simply to show their support for us. In addition to the walk, I also designed and distributed a Bloomin’ Uterus button in exchange for a $2 donation.  And a monthly support group has since developed as well! 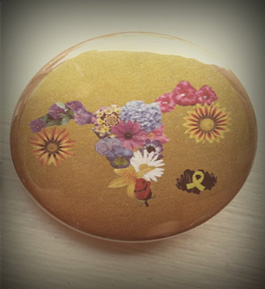 I was diagnosed June of 2014 . After I was diagnosed, I felt broken and ugly. So I created the Bloomin’ Uterus design to remind myself that I am beautiful and whole. Deciding to share the logo with Endo Sisters everywhere, started fundraising that November. I decided to donate all the proceeds raised from button and t-shirt sales to benefit endometriosis research. I also scoured the Internet for groups or walks in my area.  Finding nothing, and having to DO something, I simply picked a date and location and formed the walk. I have no intention of stopping, either. Being able to do something, anything, to aid in the eventual annihilation of this disease is so rewarding!

I would have liked to reach out to local media, either before or after the walk, to see about spreading awareness on a grander scale. However, since I was limited in personal finances and could not pay for permits and security for a larger event (I wanted ALL the money raised to go to the Endofound). Plus, I was worried media attention would bring in too large a crowd since I wanted to keep this event on the “small and intimate” side of things…Perhaps in the future!

I had done a lot of research on different endometriosis organizations and found that the Endofound had the most constant outreach and support for medical studies. It’s about the women, about learning, and about giving; not about receiving recognition or “props.” It also had a lot of activity on its webpage about recent fundraisers, studies, community involvement, etc.  The Endofound had everything that I wanted in an organization.

The Endofound is constantly going out into the community to inform the public, especially young women, about this disease. Raising public awareness on a GRAND scheme! It also supports research studies and facilitates movement toward better understanding this disease. The facilitating of annual medical conferences, along with patient support days, clearly shows the Endofound’s ongoing efforts for outreach and progress.

Not only do these initiatives teach women and the public about the signs and symptoms of this disease, but they serve as a constant reminder that the sufferers of Endo are not alone. We are all in this together! And this great big organization known as the Endofound, in all of their glory, galas, Hollywood names, and finances, still reaches out and cares about the “little people.” It’s incredibly touching!

I was 35 years old when I learned I had Endometriosis. It felt great to know there was a medical name to what I thought was normal.  Felt even better to know I was not alone, and that there are people out there trying to help!

So much would have been different. I would have been able to pursue my doctors, insist on diagnostic tests or a laparoscopy; not just pop pills and be told my pain was normal. I would have fought. I would not have been complacent and stagnant. Now that I do know, I wish to fight for, and with, the other women in similar positions. I am so proud of the ENPOWR project!

You can absolutely do this. There are resources out there. If hosting an event in a city location, check on the rules and regulations (some cities allow small events without permits). Gofundme (or any other crowdfunding webpage) can verify the non-profit status of an organization and donate directly to them! You may be just one person, but you can do incredible things!