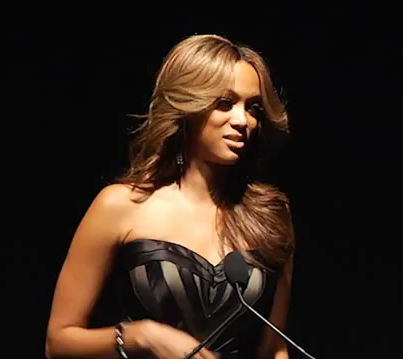 Hello! Hello everybody! How is everybody doing? Good. Did you notice that when you walked into this room you like immediately smelled something really good? As soon as I walked through those doors over there I was like “it smells so good”. I started looking at the flowers and I was like it does not smell like flowers but it smells really good. I was just speaking to our beautiful host of this evening, Miss Padma, and she said that she actually took three essential oils, blended them, had people come in here for three hours, wafting it through the room. I think it is actually in your linens as well. So, the attention to detail that this woman takes is absolutely amazing. It is part of her fragrance line. So I am like “girl you better work”.

I brought my very good friend and hairdresser, plug – hairdresser – Oscar James here tonight. We were really excited to come and we have to be honest, it was for the food because we knew that anything that Padma was putting on that the food was going to be insanely amazing. As she did the whole scent of the room you know that she did the whole tasting and the lick the fingers to make sure that it was right and it was really good. I cannot wait to taste that chipotle, am I saying that right Padma, chipotle tamale with beef? ChiPOTle, chippolini, what? Anyway…I cannot wait to taste that.

Padma was at my house just two nights ago. We were supposed to go the movies then she came over and I am like, “Girl, I’m tired” but she said she was hungry and she said she was starving. I had some leftovers, it was this cod and there were these like sugar snap peas and stuff and so I put it in the microwave and she finished that, damned near licked the bowl. Then she is like, “I’m still hungry”. I did not have any food in my house. I am going through everything and I found a frozen dinner. And I was like “how do I tell her that I only have a frozen dinner”? But I made the frozen dinner and it tasted really good and she actually really liked it and for the tenth time I was like, “Padma, you need to make these frozen dinners with your name on it and your recipes because it would taste a lot better than that”. If anybody in the room gets around her tonight can you guys tell her that because I am a frozen dinner girl and I have not found one that tastes as good as her food so she can get her food frozen up in my Whole Foods freezer – I will buy it!

We know that there is an auction item room here and the bidding is going to continue online after dinner and there are two, selfishly two, particular items that I think you need to pay attention to. One is an America’s Next Top Model makeover and a styling and a photo shoot on the set of America’s Next Top Model. Yeah! We have a very confidential set; we do not let anybody come, so you are going to meet girls, get the photo shoot, do that whole thing, be the fairest, learn how to smile and all that stuff. I think that there are some really sweet daughters that might not be here that deserve that. Or sons, hello…that deserve that. And if you feel that your daughter does not deserve that I will just give her my infamous…I was rooting for you, we were all rooting for you…how dare you talk your mamma or your daddy that way kind of speech. But you can still get this auction item for her.

Now the second auction item that I would like to talk about comes from Padma herself. Now some of you all in this room, particularly the male species, may remember Padma’s famous Carl’s Jr. commercial. Do you remember that? Let me refresh your memory. She was walking down some like farmer’s market, all sweet and putting her hand in like beans and spices and talking abut how traveling the world is so important to, you know, taste the epicurean delights of ingredients for food and recipes. And then she cuts to sitting on a stoop with a big, fat, juicy, sloppy, disgusting “I want it” Carl’s Jr. hamburger. It is dripping everywhere and dripping all down her arms and then she begins to lick herself over and over and over again. So guess what Padma is offering tonight as an auction item? She is offering to lick the face of anybody that will put big money down for that. She will not just lick your face once; she will lick it over, and over, and over again. Oh what? That is not an auction item? Oh come on, that is not an auction item – you guys said that was an auction item! Okay, anybody who would name her cookbook “Tangy Tart Hot and Sweet” should be licking people for money in my opinion! I am sorry. What was up with that title girl, “Tangy spicy Hot Tart and Sweet”? Do not act like you were talking about food we know what you were talking about. But anyway…moving on.

I am apologizing if anybody is less than 18 in this room. It gets PG after this.

Padma and I met when I was 17 years old and we were in Paris. We were like these young, starry-eyed models and we were strutting ourselves on the runway with Linda Evangelista and Christy Turlington and Claudia Schiffer and all the big stars. We met as young mannikens but then later we reconnected as women taking control of our destinies. I feel that Padma is a woman that has taken control of her destiny. We all know she is stunningly beautiful; she is a remarkable woman, a momma of Krishna who I was hanging with the other day, beautiful Krishna. Padma speaks five languages. She has written two award winning cookbooks, she is a model, she is a jewelry designer – she is absolutely amazing. But you know, one thing that is really, really important, and I know we are chatting but we are going to talk about why we are here tonight so if I get just a little bit of “ssssssss” it would be really great. Thank you so much I am getting to why we are really here.

What I really admire about Padma is that she has a serious dedication to endometriosis. We know this is a disease that is experienced first-hand, that she experienced first-hand, and that caused her to take action. The interesting thing with her is whether she is speaking on a podium like this about endometriosis or whether I am chilling with her on her couch and she made some chai tea and we are just sitting in her house talking about it, there is such passion, there is such conviction, this is not just something that she is putting her name on as a vanity project that a lot of people do. This is something that she lives, literally because Padma has endometriosis. She is not a meek woman; she is not a mild woman. Padma is a survivor and it was obvious because when she was 14 years old she was in a car accident and she had a fractured hip, shattered bones and we all know this beautiful, lovely scar that she proudly displays on her arm, on national television, week after week after week, which touches me personally because it inspires women and girls everywhere to celebrate their uniqueness.

Talking about infertility you guys it is not an easy thing. It really, really is not. A lot of the times it can be embarrassing for women talking about our “down there kind of parts”. Sometimes we feel inadequate or personally disappointed. But what Padma lets women know is that it is not their fault. She is bravely spreading the word and sharing her own experience and telling women they are not to blame. She is encouraging them and supporting them to get the help that they need. Now yes, we all know that Padma is beautiful. Padma, actually my Indian friend told me to say Pudma, Pudma, is that right, Pudma? Pudma, Pudma, Pudma. We all know that she is beautiful, absolutely ravishing. We know that but what I also know is that there is nothing more beautiful than empowering women and inspiring women and girls every single day.

Ladies and gentlemen, I give you the radiant, beautiful, empowering and inspiring Padma Lakshmi. 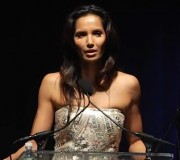 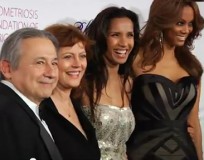