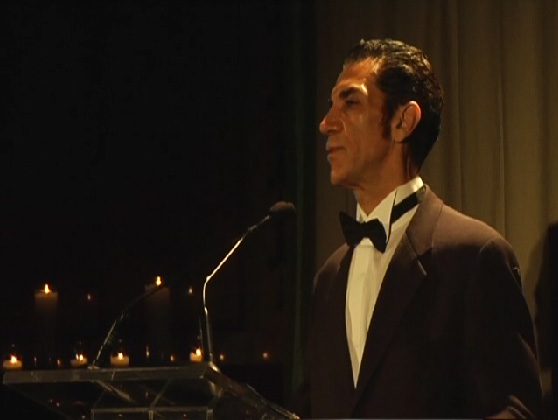 Thank you very much. I would like to invite someone who is very special, he comes from Stanford. He is a man who sacrificed himself for this cause. Last year we honored someone like him, which was Harry Reich. He is here tonight. However, this man also, single-handedly, made a revolution in surgery; he brought the video camera into surgery in the late 80s. Nobody used the video camera in surgery until Camran Nezhat. I would like to honor him tonight and ask him to join me at the podium.
I would like to give this little piece of appreciation to him. These things do not matter much, the work is important for his lifetime commitment to the science and treatment of women within endometriosis. Thank you, Camran, for all that you have done.

George Bernard Shaw said the reasonable man adjusts to the world, the unreasonable man tries to adjust the world to himself. If it was not for the unreasonable man, the world would not change. I would like to acknowledge and thank this organization by Tamer and Padma as they have tried to somehow and in some way be unreasonable. Because unfortunately in medicine, although scientifically me and some other people have tried to be unreasonable, and go against the current and change medicine for the benefit of people like you; it is not only women who benefit from minimally invasive technology and the techniques that we all discuss today. It is not only for women. It is for men, for children.

It is for your sister, your mother, your brother, your father. The technology was developed and I, my brothers, and other friends here, were probably at the very beginning of the curve. We developed it. It is not only for women. All of you who have had gallbladder surgery, it is because of the technology that gynecologists developed.

Unfortunately in medicine, things go very, very slowly. Unless there is a force from people, or organizations like this, and they are able to educate the public, it will not go far. In medicine things are very, very slow. What they are talking about is to not anymore open up big, large incisions for men and women; that is all we are talking about. We can do that. Endometriosis patients are responsible for that change.

Because when we developed this technology, and when I started working on this with my other friends, a lot of them are here, the issue was for minimally invasive surgery.

There was an article in Newsweek in 1992, I think it was February, Jeff Crowley was the author, and they featured some of the work at that time that I had started doing. At that time I said that in 20 years, major abdominal surgery would be gone. But now it is almost 20 years and still a very small portion of the surgeries are done by minimally invasive surgery.

Because in medicine we do not have the power to persuade in ways that organizations, or situations like this, could be done. In New York City alone, besides Tamer, I know my brother, Farr Nezhat, who is a Professor at Columbia and also the Head of the Minimally Invasive Surgery at St. Luke's-Roosevelt Hospital, has been doing endoscopy or endometriosis surgery for years and teaching it, but still people are doing many major abdominal surgeries.

It is admirable that you have taken up this cause. You are trying to change, and this change, although it sounds new, it is not really new.

This is the history that I have witnessed for operative laparoscopy. It is still very new unfortunately because people do not want to accept it. We admire you. We thank you and I appreciate all the help you are giving to these people to make minimally invasive surgery a go. Thank you. 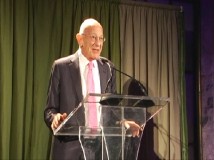 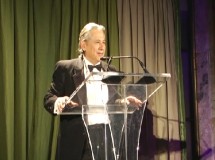