February of 2015 was one for the books; I was 11 years old at the time and in 6th grade. I was young and 100% healthy. Those were the good days. One February day my life was no longer going to be the same, and I had no idea.

The morning of my life-changing day I crawled out of bed like normal and used the bathroom. I noticed something was off. Let’s just say red isn’t what I expected to see in the toilet. I flushed it away.

Little did I know that day was going to be the start of it all. Some days were better than others, but as time went by I started noticing the bad days outnumbered the good days. The intense throbbing pain stabbed my stomach like a million knives. This happened quite frequently, but I thought I’d be used to it by now. Well, I am not! There is nothing I can use to compare the types of horrendous pain I endured.

When I was about 12 years old, my mom and I decided the heaviness of my flow, my pain, my mood, and my pale skin were not just an adjustment for my body; it wasn’t normal. Sometimes it felt as if I was peeing my pants, but it was just a pool of blood spilling out of me. Losing mass amounts of blood created other issues for me as well. I have iron-deficiency anemia, meaning my blood does not have enough iron due to the loss of too many red blood cells. My loss of blood caused my anemia, and my anemia caused my pale skin. Some days my mom could just look at me and see the wringer I’d been through. For me, terrible physical pain came with a friend. This friend was emotional pain. My moods always shifted. I specifically remember one time my mom asked me where the toilet bowl cleaner was, and I started crying. Because of all this, my mom scheduled me an appointment at a Catholic practice OB-GYN. The gynecologist I was seeing was Dr. Stroud.

The dry, sad smell of the doctor’s office was overwhelming. Nervously, I watched the second-hand tick on the clock for what seemed like forever.

“Hailey,” the nurse called out.

Hesitantly I looked around the lobby, and then I proceeded to walk through the door with my mom.

The pretty nurse said with a smile, “Hailey, if you could step on the scale for me that would be wonderful!”

I stepped on the scale and watched the number go up past 100 to 107 pounds. That was pretty average for me.

“You can step off and have a seat right over here, so I can take your blood pressure.”

The nurse put the cuff on my arm and tightened the velcro.

The blood pressure cuff always crippled me with fear. I was always scared they would never stop pumping and I would lose my arm. I was constantly told to relax, but it wasn’t that easy. Going to the doctor was like having PTSD for me because every time I went I never received good results.

After she was done taking my blood pressure, and I was done having a mild panic attack, she directed my mom and me to a room where we waited for the doctor.

Dr. Stroud entered the room and introduced herself, “Hi Hailey I am Doctor Stroud, and I hear you are having some issues. Would you like to explain to me what’s going on?”

“Well, for a while now, I have been having terrible pain on my cycle, frequent cycles, and an extremely heavy flow. It’s so bad I can go through a tampon in an hour and I bleed through the sheets every night.”

“Ok well let’s try putting you on progesterone. It will help regulate your flow. I am also going to give you Lysteda, and you can take that as needed for pain. I want you to come back if things aren’t going well for you.”

For about a year things were going well, but eventually, the medicine stopped having an effect. I noticed the terrible pain start to recur, the extremely heavy flow come back, and I could never enjoy anything. We scheduled another appointment, and Dr. Stroud gave me progesterone again, only a stronger version called Provera. At this point, I was 13.

About four months later the newer medicine was not working, and my body could not keep up. I knew it wasn’t working when I was paralyzed with pain. I called my mom while she was at work. She hurried home and rushed me to the ER. No matter how fast she drove the pain still ripped apart my insides.

I got a room fairly quickly, and they examined me and did normal labs. They could not find anything wrong with me. I knew something was wrong.

I thought to myself, Shouldn’t the doctors be able to figure it out?

One month later I felt lower discomfort again, and even walking gave me unbearable pain. I still went to soccer practice, but I was unable to participate. My mom took me back to the ER. The nurse’s name was Perry, and he was not very hospitable. He told me I had the stomach flu and sent me home. He also tried to tell my mom that I was overreacting and there was no reason to bring me. Rude Perry, as I called him, had a crummy attitude. His obvious misdiagnosis and atrocious attitude only upset me more. A fire inside me burned because no one could figure out what was wrong with me, and I was suffering.

I went back to Dr. Stroud because she was the only one who seemed to listen to me. She brought up her concern that I could have endometriosis. I had no idea what that was. She briefly explained it to me. I was a little scared, but I was also glad there might be an explanation for everything.

I remember her clearly saying, “The only way we can know if that’s what you have is if we perform laparoscopic surgery. It is minimally invasive, but there could be a chance there is nothing there. I believe you do have endometriosis, so I think the surgery is necessary.”

I was scheduled 6 months later for a surgery consultation with the surgeon. My surgeon was also Dr. Stroud. My surgeon and doctor are married and practice together.

Six months later I went back to see the surgeon with my mom and dad. I explained everything again, and he agreed that it was a good idea to schedule surgery. My surgery was scheduled for November 19th, 2018. Each day my stomach tied itself into a knot out of fear. It was going to be my first surgery.

It was about a week before my surgery, and I had to go get some tests done at the hospital. The best part was missing school for it. I wasn’t too nervous about it until I found out that I needed to get my blood drawn. In my medical charts, it showed I had a fear of needles (I still do). It is my second biggest fear after heights. Anyway, they took my dark red blood while I cried heavy, wet droplets. It’s a routine for me; I cry every time. I was finally released to go back to school when I was done bawling my eyes out.

It was a week later on November 19th, 2018. It was go time. Everything was set in place and ready. We were told the surgery would be expected to be a half an hour to an hour-long. Well, mine ended up being two hours long. They had found endometrial tissue on my bladder, my ureters, near my kidneys, and everywhere it wasn’t supposed to be. Also, there were multiple lesions which were where I was bleeding internally. I was diagnosed with stage IV endometriosis.

This should be the end of the story, but it’s not. I wish it was, but when you have a chronic illness, the story never ends.

After the surgery, it was hard to walk and move around. I lived like a slug. I was also on opioids for the pain. The opioids made my eyelids heavy, and it was impossible to stay awake. It was also hard for me to use the bathroom. I had not been able to go to the bathroom in a day, so my mom took me to the ER because we didn’t know why I could not go. The nurses got a little bit of a urine sample and did an ultrasound. Well, it turned out I had a UTI from the catheter I had in my surgery.

We picked up the antibiotics from the pharmacy. I had to take it for 5 days. If you haven’t noticed, nothing goes the right way for me. A normal person would take the antibiotic and their infection would go away. I am not a normal person. I was allergic to the antibiotic; It caused me to stay awake for about 3 days.

I recovered from the UTI, but the story, unfortunately, doesn’t end there either.

Ironically, as I am writing this, I am experiencing extreme pain. Large tears are falling from my eyes and the pain is constant. It feels as if my body is angry at me. The reason I am having such excruciating pain is because the surgery did not completely fix everything for me. I was put on some different medicines, and then quickly taken off. I was tested for a blood disorder. I am currently on no medication except pain pills, and I continue to struggle almost every day. I also face emotional struggles. I have to get a surgery every 3-5 years, I know there is no cure, I try multiple different medicines, not much is known about endometriosis, and I have to be excluded from activities sometimes due to pain levels. I would like to raise awareness and speak up for other women. I want to be their voice and make my voice be heard. 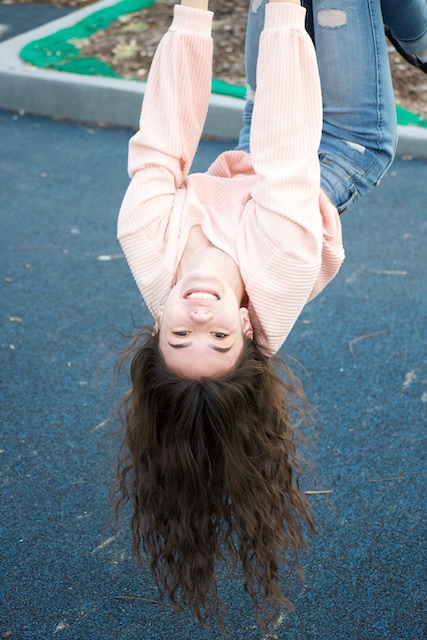 My name is Hailey Almodovar, and I was diagnosed with endometriosis at the age of 14. I play soccer, run track, and play flute and piccolo in an orchestra. I have been learning Spanish for 4 years, and I’m a sophomore in high school! My main goal in life is to help others with endo, and I want to become an endocrinologist!

Editor's note: Would you like to contribute to EndoStories? Click here to learn how to submit your work.
*Patient stories submitted to EndoFound.org are the views of the patient and not necessarily those of the foundation. All testimonials are from real patients, and may not reflect the typical patient’s experience, and are not intended to represent or guarantee that anyone will achieve the same or similar results.