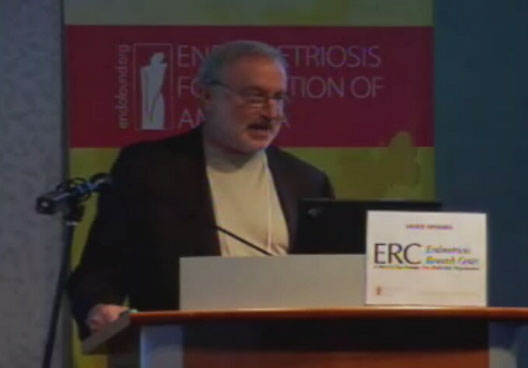 I have the privilege of introducing Dr. Harry Reich, who is well known to anyone who has studied endometriosis or has been involved in laparoscopic surgery. He is truly a pioneer and has helped countless surgeons learn these skills. Through his techniques, innovative and daring boldness, I think the specialty has evolved. He is a founding member of the Society of Laparoendoscopic Surgeons and he is a member of the foundation of the American Association of Gynecologic Laparoscopists, and he is past President of the International Society for Gynecologic Endoscopy. He is very special and we are quite honored to have him to us speak this morning.

Why are ovaries removed in hysterectomy? Well if you look at our codes from American College of OBGYN you always get more money if you take out the ovaries. It is true. If you do a difficult operation to take out the ovaries by vaginal route, you get less than if you do it with a big open incision. We have a lot of problems in our specialty. But, you know, it is a big specialty obstetrics, goes along with gynecology. I do not understand that, we should change that someday, but it is still with us. Why is present day total laparoscopic hysterectomy a rip off? Well it is simple. I will mention that at the end, but it is a rip off because present day codes for the operation do not include pelvic support, which the original operation did, so as a result the operations that are being done in many centers, I believe, will lead to prolapse problems in the future.

Why do so many patients with endometriosis have no endometriosis? I always am suspicious when a patient comes in and they have been laparoscoped many times, and they do not have a pathology report to show me if they had endometriosis. We could almost always tell in the exam. If it feels relatively normal, most of the time you are not going to find endometriosis. In my practice, most of the time, if I examine the patient and do a good rectovaginal exam, which I guess some doctors do not even do rectal exams, but if I do a good rectovaginal exam, I should have a very, very good idea where the patient hurts and be able to fix that during surgery.

So, I would like to thank you all for the opportunity to express my views about endometriosis. I do believe we need proper guidelines for the diagnosis and treatment of this disease. Please realize that extensive endometriosis surgery can be very difficult surgery, probably much more difficult than oncological surgery. I am convinced to this day that what is excised does not come back. We will talk more about that in a few minutes.

I want to show you the state of the art when I was at Columbia, where I started the Department of Advanced Laparoscopic Surgery in 1995 to 2000 and this was some… we pushed through the vision. What was really going on with endometriosis at that institution?

We looked at about a two-year period of time, and we found, it was 20-months from 1998 to 1999, 424 patients with pelvic pain had a discharge diagnosis of endometriosis. Laparotomy was done in 108 of these patients. But look at the operations that they had.

So what does this disease do after that? Well a disease without a uterus, fundus, it is on the cervix. It has a free route to grow from rectum to the ureters, and to the bladder. Some of those cases where we do cervical stump operations are very, very difficult. Well anyway, what I did find is that no laparotomies were done to excise endometriosis of the deep cul-de-sac, anterior rectum, posterior vagina, rectovaginal septum, and ureters. The only thing that showed that was excised, or the only excisional surgery, was my laparoscopic surgery. Well anyway, I hope it has gotten better, but that was the state of the art in 1998.

Again, like I said, most women with a diagnosis of endometriosis without biopsy, do not have endometriosis. And I do not believe in Sampson's theory. If it occurs, no one has ever seen it, and I have been with Schenken and he is sure that it is so fast, that it occurs so fast that you cannot see it. No one has seen it, like going through the peritoneum, or starting to develop that…anyway so onward.

I am not going to go through the operation of how we take this all apart, but I will say, pointing to the bottom part there [slide] where I said I have no use…would you talk about this for the European, we have different sites for the different situations. But in our country we have two distinct groups doing laparoscopic surgery; a very large cluster doing it for diagnosis and minimal treatment, and a much smaller elitist segment doing it for optimal treatment, instead of open abdominal laparotomy.

There persists a poor level of surgical training dealing with endometriosis, and poor reimbursement certainly has contributed. There is still, as of 2010, no codes for excising these different areas of endometriosis. Actually the practicing gynecologist is penalized financially for spending too much time in the operating room instead of the office.

Office patient visits and procedures pay approximately 20 times what can be made by operating. Therefore few gynecologists want to get stuck with complex endometriosis surgical cases involving the rectum, ureters, and frequently the small bowel.

Many women, again like I said, with endometriosis by multiple operations, I call it. For some doctors, I think they look in, there is very little, they say, “Ah, there is a little bit of blood from the old period, that is endometriosis”. It is really hemosiderin-laden macrophages, where if they went in a week later would be gone. But then they put the patient on Lupron, and then a year later they come back and they do another laparoscopy and keep going in that fashion.

So I call that simple cashectomy. I think if you do it 20 times that would be complex cashectomy; the extraction of the cash from the patient without ever curing the condition. I did hear some of the comments earlier, and I think about some people having gone through multiple operations. If you have ever gone through more than two operations, I would really search for another doctor.

I am going to move pretty fast because my time limit is coming close. I want to say that laparoscopic surgery for endometriosis - a lot of it was first presented by myself and Camran Nezhat. This was back in 1985 when Camran did his surgical treatment, and that is when he really introduced video to us all. You know at that point I was still looking down a telescope at laparoscopic surgery, but I had my endometrioma work presented at that time.

Nice to see you Camran, nice to see you Farr. You see the guy in between us, was a very famous football player, he was from the Chicago Bears, Walter Payton, right?  Anyway, so we were doing this work in 1985 where we would excise the endometriosis.

I just want to say another thing. This is another pet peeve of mine, and that is this idea of deep infiltrating endometriosis. I never see deep infiltrating. I do not see cancer, I see fibrosis, I call it deep fibrotic endometriosis, and I believe it makes more sense to call it DFE instead of DIE. It is not DIE; it is not a malignancy, but Farr might give us a little bit more of an idea about that a little bit later.  These chunks of tissue as you could see that we removed are all full glands and stroma and always fibromuscular tissue so when … 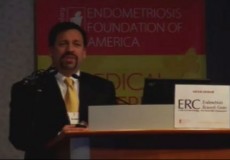 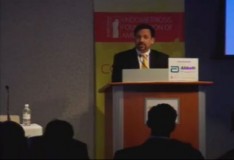