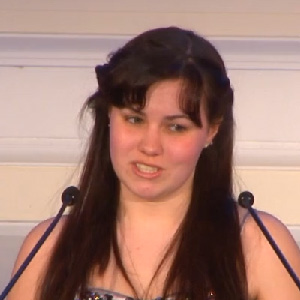 Good evening everybody, I am McKenzie Ryan. I am 18 and I have endometriosis.

Though I was diagnosed when I was 16 my story actually started when I was just 12 years old. A year after I got my first period I started experiencing horrible cramps and backaches both the week before and throughout my period. My symptoms only escalated from there. I went to see my regular pediatrician about the issue when I was 13 or thereabouts. That started my horrible medical journey. I was ordered through rounds of blood work, ultrasounds and nothing showed up. At 14 I had a particularly horrible experience where I had fainted in class and found blood in my stool. My doctor referred me to three different physicians at that point; a pediatric gynecologist, a gastroenterologist and a psychologist.

When I was 14 I even went in for an upper endoscopy searching for Crohn’s Disease. It came out negative. At 15 I came all the way down here into the city for an hour and a half long MRI, which also showed nothing. I was going through all of this while still going to school as often as I possibly could, working at least one job and trying to participate in extra-curricular activities. With the exception of my mum my family did not understand what was going on. My friends did not understand what was going on. I suffered through a lot, emotionally and physically.

My family did not understand the pain I was going through. They did not believe me when I said the pain was unbearable. My own sisters constantly told me to suck it up. One day while at the store with my older sister Kelly I collapsed to the ground in pain because I could not physically move. My sister looked at me and she said, “Stop making a scene, get up. All women get their periods, get over it”. Wow! My father also frequently, constantly, yelled at me for going to the doctor as if it were my fault.

The only person who seemed to be on my side throughout all of this was my mum. She never doubted me once and she even told off my pediatrician for suggesting I need to see a psychologist. I had trouble keeping friends throughout all of this. It is insanely difficult to have a social life when you spend your days in school completely miserable and in pain and even harder if you are not there at all. I became extremely depressed and totally withdrawn.

I believe that for me the psychological pain of endometriosis was actually worse than the physical pain. That pain was inescapable month after month and year after year, after all there are treatments for pain such as Advil and Tylenol, and even stronger behind-the-counter stuff. But there really is not much you can do when you are battling your own mind. The depression took over completely and endometriosis controlled my life.

At age 16 I made the very difficult decision to have surgery after I had been bleeding for about six weeks and the pain became so unbearable that I could not move. I had trouble going to school and staying there and I just sat there and cried. I decided it was time. I did not want to live my life in constant pain anymore because that is not really living at all, and I know that firsthand.

On December 19, 2011 Dr. Monique Regard, who I commonly refer to as my Godsend, removed lesions of endometriosis from several places including my rectum, my uterus and my right ovary. She also removed my appendix. On the morning of my surgery my mum asked me if I was scared. Of course I said yes. She asked me if I was afraid that they would mess up while they were in there. But that was not what I was afraid of at all. I was afraid that after everything I had been through the doctors were going to go in and find absolutely nothing. I was afraid that after everything I had dealt with that the things everybody was saying to me and about me would be true, that I really was crazy.

Though I had a successful surgery my journey with endometriosis is far from over. I have recently received an IUD as treatment to put off going in for a repeat surgery until after I graduate college.

Though I feel loads better than I did before I still battle endometriosis every day. I am lucky that I have a supportive mother who pushed forward on my behalf while everyone was telling her that I was exaggerating or seeking attention. Most girls do not have that.

What my mother did for me you all can do tonight for other girls like me who are not so lucky. If my pediatrician and the nurses at school had had more education regarding endometriosis my high school career would have been totally different.

Millions of young girls are going through this every day and have no idea what is wrong with them or why it is happening.

With that I want to thank everybody at Endofound for all the work they do and all of you for being here tonight, helping to spread the message and helping the many women and girls suffering through this every day.

And I also really want to thank Padma for being a wonderful inspiration and really helping me find myself through all of this; helping me turn a negative experience into something positive since I am all with you tonight.