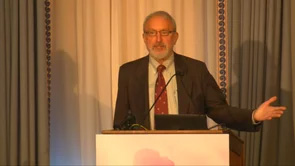 Hey, the next speaker who unfortunately will not be with us but I just want to say she is the premier vaginal endometriosis person, vaginal hysterectomy person. I have done work with her for the last 15 years. She was at the Mayo Clinic for many years. Fortunately I just have to show you a video on vaginal removal of endometriosis. It is a tough video, it is probably around 20 years old actually from when I was at Columbia. It was a modified technique of Marc Possover who specialized and really developed a reputation for doing this type of surgery.

Now this is a technique that Marc wrote up in the Grey Journal. There you can see the lesion behind the cervix. It is a large lesion and instead of going in laparoscopically like I almost always would have and always did after this I have to say, this time I went with Marc’s technique. I made a circumferential incision around it, around that lesion. I think the results when you look in what we saw with a scalpel will be pretty dramatic. The idea is circumferential incision around the lesion go in and try to make a plane on each side of the fibrotic lesion and put, the way he described it, put Foley catheters in that area and blow them up and then, Melanie do you remember this case, I think this is an old Columbia video but anyway, it was an ordeal. We sutured over the defect so all that endometriosis stayed inside and I sewed over it. I sewed a relatively normal vagina over the defect that I will retrieve later. Then hopefully take out the Foleys, which hopefully have done my dissection for me, right? Well, I am hoping at this stage that I will have an easy operation and not the usual four hour rough time at the bank. We close that and here look at – you cannot even see whatever I did. When I look in laparoscopically everything is still stuck pretty bad.

Now, unlike everything we have learned today I just tend to go right for the lesion and I use scissors, I do not use cautery, I do not use any thermal energy for like usually about an hour into the case. I try to do it with scissors and I try to cut where it will not bleed, or if it does bleed it will stop and most of the time it will. With endometriosis, endometriosis does not have blood vessels that are born to go into that area. So the bleeding is neo-vascularization that will stop on its own. You can see that I am cutting in between fibrotic tissue so that I can find normal tissue planes and then just using blunt scissors I could push on it and develop the planes and the bleeding will stop on its own. I operate with a rectal probe so I always have something in the rectum, almost always and I cut on the disease so I know where I am at. Very frequently I will operate with a sponge in the posterior vagina pushing it outward because that is where the disease is. It is rectovaginal septal disease. Again, I am doing this operation to find my two Foley catheters that are in there along with the endometriosis lesion. As you can see they are far away and normally I would do this operation without the vaginal approach. I sort of recommend it that way for myself. We take chunks out by popping up the 5 mm trocar. The goal here is to find the loose areolar tissue of the rectovaginal septum on top of the rectum. I operate on top of the rectum not on the top and the back of the uterus.

(Audience: So what are we looking at right now?) Right now you are looking at – see the big chunk of endometriosis ready to be popped out through 5 mm through the skin without a trocar. What you are looking at right down there is the cervix. I finally found the cervix down there, loose areolar tissue on top of the rectum below the cervix. Again, I do not burn things. I try to do most of this with scissors. There you can see that is a big chunk of tissue. It is hard grasping it. I use a 5 mm grasper in my right hand and my assistant is right and I operate with my left hand although I am right handed. Now I try and catch the light of the Foley catheter, see there, way down there in the recto-vaginal septum. (Audience: The tissue on the right hand is the one you removed from the vagina, right?) No, no I just popped it out through the skin through 5 mm incisions. (Audience: No, it is what you pushed up from the vagina right when you incised the tissue out.) I probably pushed that out (Audience: You sewed over it.) I take things out sometimes through the 5 mm quadrant or 10 mm umbilical. You see this is stiff___ stuff on and to your left (away from mic – difficult to catch) I know where the septum is. I know where the rectum is because I have a probe in it and I guess you would call this skinning (Audience: shaving) or shaving, trying to take as much off as I can without having to do a discoid resection. Again now we are just trying to take what we could grasp and is solid and fibrotic. I am just trying debulk fibrosis.

But the key to this stuff too is not to burning so much so you do not have adhesions to all the burnt areas at the end of the operation. I am not sure if I ended up opening the vagina or not in this case. I guess I am going to resect the rectum. I just put a clamp across the sigmoid to stretch it out and I put my circular stapler inside the rectum. Usually then I can push the lesion into the circular stapler. But I guess this is close to the end when I do my under water exam. You can see at the end we checked for bleeders under water in all cases, get rid of all extra blood clot.

I have not looked at this video in 20 years so I am sorry I was not able to give you a better narrative. I am pinch hitting at the last minute with this. 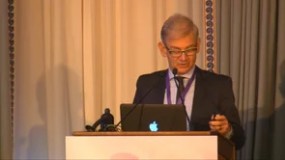 Mauricio Abrao, MD - The need to improve the therapeutic strategy of endometriosis treatment 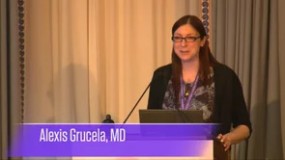