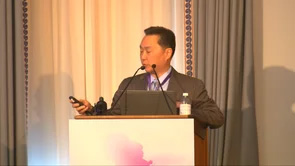 Thank you very much for inviting me to speak, for the organizers and the Endometriosis Foundation of America. It is true, I did try to bump Dr. Burke from speaking because I have patients at 12:15. I did not re-do my schedule either so I will try to get through this very, very quickly. It is hard to come to a meeting like this where I am usually the guy at gyn-oncology meetings who is showing the videos and falling asleep when people talk about biology, chemotherapy and molecular physics and things like that. I am just a surgeon – that is all I do. It is hard for me to talk about all this other stuff and not be the one showing the videos. I do not think you want to see videos of diaphragm resections or radical hysterectomies. I think you want to see endometriosis surgery and that has been adequately and phenomenally covered by the previous speakers.

I just thought I would talk a little bit about what is new in terms of the SGO, the Society of Gynecologic Oncology view of ovarian cancer and how endometriosis plays into that. This was a slide set of about seven or eight slides that I took from a much larger slide set that was given at our national meeting. Farr, did you speak about this at all? Good. Beth Carlin, who was the president of the SGO a few years ago, when she was president she worked with President Bush to enact Johanna’s law and they were charged with updating the paradigms and the research and care of women with ovarian cancer. They presented this phenomenal body of work at our meeting just last month.

The background is that it was a congressionally mandated report sponsored by the Centers for Disease Control and Prevention. The Institutes of Medicine was charged with completing the work and the report has its origins in the Gynecologic Cancer Education and Awareness Act, also known as Johanna’s Law, which was signed into law by Bush in January 2007. A multidisciplinary committee was assembled there were four in-person meetings, invited commentary by stakeholders and presentations by experts. They commissioned one paper. The report was independently reviewed by 18 experts invited for their disease perspectives and technical expertise in relation to ovarian cancer. This is a list of the various experts that were on the committee. The one of note is Dr. Levine who gave me these slides and he is right there. He works with me.

So an ad hoc committee under the auspices of the Institute of Medicine was charged with reviewing the status of the science of ovarian cancer, formulating recommendations for actions to advance the field. The committee will summarize and examine the state of the science in ovarian cancer research – that is pretty much what I am talking about – and identify key gaps in the evidence base and the challenges to addressing those gaps. They wanted to consider opportunities for advancing ovarian cancer research, examine avenues for translation and dissemination of new findings, and communicate new information to patients and others. The committee was supposed to make recommendations for public and private sector efforts that could facilitate progress in reducing the incidents, the morbidity and mortality from ovarian cancer.

Some of the gaps for that research is not funded by ovarian cancer subtype, which is where endometriosis comes in. There are genetic and non-genetic factors that we do not understand. There are screening and early detection tools that are not effective nor are not being used. There is obviously a delay in standard of care, precision medicine approaches are something we need to look into, and obviously specific support care for the patients and families and other caregivers.

The overarching concepts are they want to prioritize the study of high-grade serous ovarian cancers and not the one associated with endometriosis. But there are more sub-type specific research was needed to define the various sub-type characteristics. Obviously collaboration pooling and sharing of data and bio-specimens, use of consortia, dissemination and implementation of the final steps for knowledge translation were key goals.

Some of the stakeholders are heavy hitters as you can see: US Congress, federal agencies, private foundations, industries, academic institutions, professional societies, advocacy groups and others.

Getting to the point at hand there are a certain percentage of patients that are going to have an endometrioid and clear cell carcinomas of the ovaries and that is where endometriosis comes in.

It is now thought that fallopian tubes are where high-grade serous ovarian cancer where 75 percent of ovarian cancers start is in the fallopian tubes. It really does not have a lot of play in this meeting but maybe as much as 15 to 20 percent of ovarian cancers that are thought to be of clear cell histology or endometrioid histology actually maybe start in the uterus. Just like we think endometriosis starts and maybe there is retrograde menstruation and these precursors then transform on the ovaries and give you ovarian clear cell carcinoma or ovarian endometrioid adenocarcinoma, or maybe they have already transformed and then they go out the tubes and onto the ovary. Your guess is as good as mine and the bottom line is we do not know what the answer is. But does it not make sense that we should try to figure that out.

What about endometriosis? How is it so similar to ovarian cancer? Well, I have never heard Dr. Reich speak but the things he is going through, or has been through, his career, again, you all do not know me from a hole in the wall, I could just be the Chinese delivery boy, you do not know who I am but I have made my name doing surgery and publishing surgery papers on ovarian cancer. I have faced many of the same criticisms that Dr. Reich just faced. They called my ovarian cancer debulkings in the recovery room – the ones that last eight hours – Chi-never-end-ectomy or just the Chi-ectomy for short. I have been criticized for being too aggressive because the ovarian cancer goes to the diaphragm, so instead of not taking it why do we not spend a little time learning how to take the disease off the diaphragm and the spleen and then get all the cancer out, like Dr. Reich does. It is really, really amazing to see that somebody, and I am not, I would not dare compare myself to his accomplishments but it is very, very similar, it is very, very comforting to see that we have faced a similar path to where we are today.

Getting back to the similarities between endometriosis and ovarian cancer it is a benign disease, endometriosis has features similar to malignant ovarian tumors including the ability to develop distant foci through proliferation, attachment, invasion of tissue. But there are distinct mutations and pathways compared to other ovarian cancers. There are gene mutations that have been identified and I am not going to bore you with that. I do not even understand them. As contributors to the development of endometriosis associated ovarian cancer including PTEN, KRAS and ARIDIA one mutations. ARIDDIA is very promising. It is tumor suppressor gene. It is found in 40 to 50 percent of patients with endometriosis, and it is found in both the ovarian tumor and the adjacent endometriosis. The current research in this area is looking at the mutations and trying to figure out how we can target those mutations for potential effective treatment. Gloria Huang at Albert Einstein is doing a lot of that research.

Case C, a 50-year-old gravida 1, para 1, abdominal bloating. She had renal cell carcinoma diagnosed at age 42. Her CA 125 was 21. Her CT scan showed a 4.2 cm pelvic mass, some ascites. Of note, prior to coming to see me she had a paracentesis of seven liters of fluid but that was negative for cancer. So this is the CT scan that still shows some of the acidic fluid.

Case E, is none of the above. I am trying to trick you. None of the four cases actually had cancer. Any votes? A? Having cancer? B? C? D? Nobody care? Okay, I am almost done. Case C. This patient had robotic surgery. This was the mass my fellow and I looked at this, and we said yes, this is benign, it is fine, let us start closing the robotic incisions. We completed the hyst/BSO. It was already ruptured. I do not know if it was ruptured and they stuck a needle in it, or they stuck the needle in it for the paracentesis and they gave her positive ascites, not sure which, but we did as Dr. Reich did way back in the 1980s we did minimally invasive ovarian cancer staging for 1C grade three what turned out to be an endometrioid carcinoma, the ovary and tube. I just did this case last month and she will start her chemotherapy this month.

Prevention – it is still being looked at. Can we do salpingectomies for patients at risk to prevent ovarian cancer? We have not identified a good screening method. So basically treatment is surgery and then usually chemotherapy although there is a report from Canada that says that in patients with disease confined to the pelvis that are high risk maybe the addition of radiation to chemotherapy will be of use.

Again, thank you very much to the organizers and I appreciate your attention. 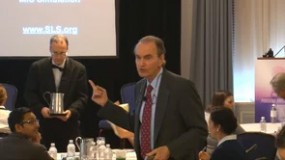 Paul Alan Wetter, MD - Medical apps: Ideas for endometriosis and how they will change your practice