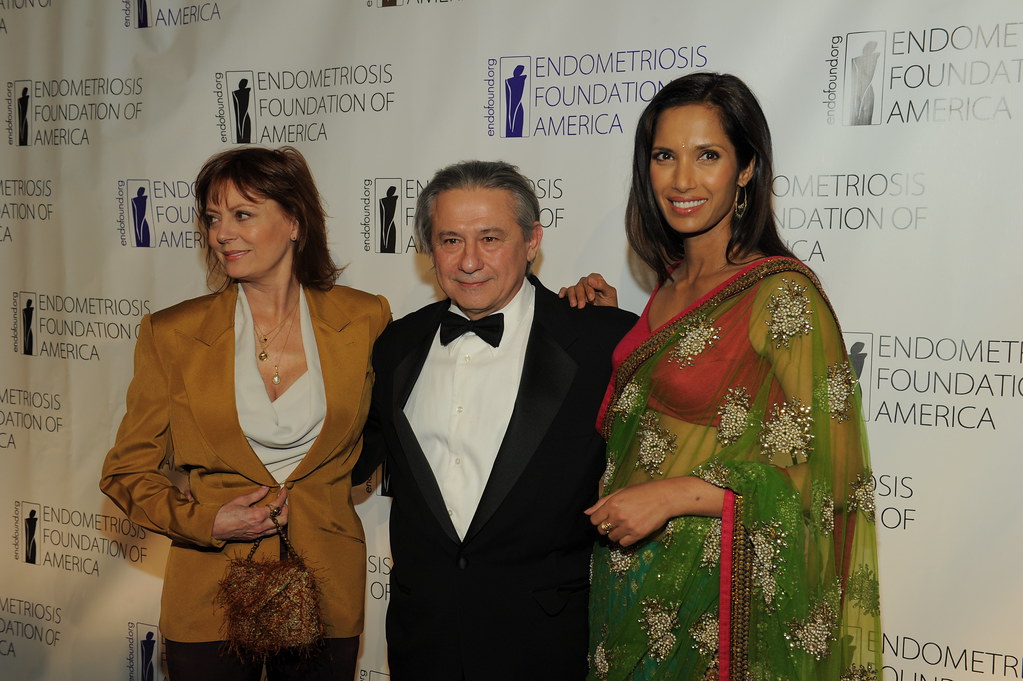 Founder Tamer Seckin, M.D. and Co-founder Padma Lakshmi hosted the 3rd Annual Blossom Ball to benefit the Endometriosis Foundation of America (Endofound) at the Stephen A. Schwarzman Building within the New York Public Library. The black-tie event was co-chaired by Susan Sarandon, Eileen Guggenheim and Cindi Leive, with entertainment and music by Grammy-nominated songstress Bebel Gilberto.

During an interview on the red carpet, Dr. Oz emphasized a key message to teenage girls and young women-as early detection is essential, patients must speak openly about their symptoms without fear in order to seek the help they need. Later, Dr. Oz kicked off the evening's festivities, by introducing Lakshmi to the stage-complimenting her courage and noting that for many, Padma is looked to as the face of endometriosis, Dr. Oz also spoke of her successful fight against the disease that allowed her to give birth to "the joy of her life," daughter Krishna. Lakshmi took the stage, thanking everyone for attending the special evening.

Lakshmi also gave a heartfelt introduction to her friend, doctor and co-host of the evening, Dr. Seckin. Dr. Seckin thanked guests for their attendance, saying "I thank you for coming for women who are not in the room but who will one day remember what we are trying to do." The Foundation also honored Keynote Honorees, Dr. Caroline Gargett, BAppSci, MAppSci, PhD and David B. Redwine, MD, FACOG, ACGE, for their tremendous efforts and dedication to fighting endometriosis.

Following the honorees, Lakshmi introduced to the stage "a thinker, a doer, a mother, an activist," Susan Sarandon. Sarandon was met with enthusiastic applause as she proclaimed, "it is not a woman's lot to suffer…I know we've all been raised that way, but it's not…suffering should not define you as a woman" After speaking of her own experience, Sarandon explained to guests, "endometriosis affects the fabric of a woman's life and every member of her family…professionally…her ability to become a mother."

Guests were treated to an exciting red-carpet cocktail reception, seated dinner with drinks sponsored by Terlato Wines. Lending her Top Chef expertise to the dinner, Lakshmi collaborated with Convivium Catering to create a specialized menu for the evening. An exclusive performance by Bebel Gilberto brought the crowd to its feet. Guests have the opportunity to bid on an assortment of items from charitybuzz, which include two tickets to Glamour Magazine's Woman of the Year Awards on November 7, 2011, two tickets to the Anna Sui 2012 Fashion Show and a seven-night-stay at The Grenadines Palm Island Resort. The online auction ended March 30, 2011.

The soirée followed Endofound's Second Annual two-day medical conference, which united global opinion leaders on endometriosis from the realms of molecular science, research, industry, surgery and those struggling with the illness. Taking place at the New York Academy of Sciences in New York City, the conference was comprised of a science & surgery conference and patient workshops.