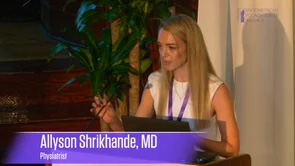 Musculoskeletal causes of pelvic pain after excision of endometriosis

Good afternoon. I am a physiatrist. Essentially we treat the muscles, bones and nerves of the body. I focus on the pelvis. As physiatrists we work very closely with physical therapists. We really are an extension of a patient’s physical therapy program.

I was asked to speak about why do patients still have musculoskeletal pain after endometriosis was removed. A recent study done by the NIH published in the Journal of OBGYN in 2015 suggested a comprehensive nerve muscle and skeletal exam to identify pain sensitivity and trigger points post operatively for patients who have undergone excision of endometriosis. Essentially what they did was examine patients pre-operatively, particularly for muscle sensitivity and trigger points internally throughout the pelvic floor. The patient underwent surgery and then was examined again post-operatively. What they found was those trigger points remained. What they did then was treat the patients with physical therapy and then a physiatrist. I will go on to discuss what we do but really they were saying that could be a source of the pain persisting post-operatively.

This slide really discusses a lot of what has already been talked about today with the hormonal aspects of pain and then with inflammation contributing the inflammatory cascade to the persistence of pain.

This is a more detailed look at the sling. Really, the basic concept is a sling of muscles. This is the detailed look at the different aspects where as a physiatrist working in conjunction with the pelvic floor physical therapist we are trying to really identify which muscles are causing the problem and the pain.

Muscles, how do they contract? You have actin and myosin and they contract in a linear pattern. I explain to my patients it is like railroad tracks. This linear pattern really allows for the small arterials that come off the larger arteries to infiltrate.

When you have a trigger point the pattern becomes a disarray, and why is that a problem? Why does that disarray cause pain? Really, it is a neural ischemia. The railroad tracks are no longer available so those small arterials have difficulty really ascending down to where they are supposed to and there is a neural ischemia going on. Essentially there is a hypoxia drop in the pH balance of the tissue, and that drop in the pH is what stimulates the inflammatory cascade that we addressed about ten minutes ago. But really the idea is, it is a disarray. A trigger point by definition it is a palpable taut band of muscles so you can feel the top band. It is almost like cords. When you touch the trigger point you get something we call a twitch response. You can feel a twitch when you touch a trigger point. You also get this referred pain pattern. So, you touch a trigger point and you have referred pain to elsewhere in the body. Lastly, with trigger points at times you can get an associated dysautonomia as well when you touch a trigger point. Or there is referred heat or sweating or some sort of dysautonomia can occur as well.

How do we treat this muscular pain of the pelvic floor? The gold standard really is pelvic floor physical therapy, which will be addressed in more detail. Proper breathing technique; a recent study done out of the University of Chicago really took patients with pelvic pain and high tone pelvic floor and taught them how to breathe where they put manometry inside the pelvic floor and had them breathe improperly and then taught them the proper diaphragmatic breathing. The pressure dropped over 50 percent immediately and they had a statistically significant change in their pain. I think that is the fastest way, really, is with proper breathing. It seems so simple but really that is important to always teach to all the patients.

Muscle relaxers; I use both oral and suppository forms of muscle relaxers. Quite often for specifically pelvic floor I will start with suppository options. Usually I combine the Valium with Baclofen. Lastly, ultrasound guided trigger point injections into the muscles. You can use lidocaine, which is the gold standard and for some patients I will combine lidocaine with something called Traumeel, which is a way to decrease inflammation. It is a product that is natural, plant derived.

Now we are going to talk a bit about peripheral sensitization and central sensitization it was alluded to in the prior talk. But with peripheral sensitization really when there is that trauma, as we were talking about before, which really is the endometriosis you get this sensitizing soup where you have this release of neurotransmitters that stimulate the inflammatory cascade. Really what it is is there is extracellular calcium and nitric oxide that move intracellular and they release this substance P as well as glutamate. This can happen both, again, peripherally at the nociceptors and then centrally at the spinal cord going up to the brain. You get this hyper-excitability of the membranes. They start to depolarize, the sodium potassium channels start to depolarize when they really should not. They get hyper-excitability.

This is another picture talking about the inflammation, which again, really is the inflammation released from the tissue damage of endometriosis, release of the inflammatory mediators and then you get this hyper-excitability state. There are more ascending signals from the spinal cord to the brain and there is a lack of what we call descending inhibition. So, your nervous system is excited. Then you get this chronic pain state with allodynia and hyperalgesia. Allodynia means something that should not be painful so you touching a patient even with a cotton swab is painful. Hyperalgesia is exaggerated painful state as we talked about earlier, where you pinch somebody and it should be mildly painful but a patient who is in a chronic pain state could jump out of their seat.

With central sensitization you get this abnormal pain signaling as we were discussing before. Once this becomes chronic – it goes from acute to chronic – really this pain state you start to get stored in you mid-brain, so it becomes the patient’s new normal. Then you have this sensitizing soup as we were discussing with high levels of substance P and glutamate travelling throughout your body.

Now we will talk about treatment of neuropathic pain. The idea is to desensitize both the central nervous system and the peripheral nervous system, calm things down. How do we do that? Again, physical therapy can desensitize in their way working with their patients, particularly myofascial release can help. Acupuncture can help to desensitize by working really on the central nervous system. I quite often will refer for acupuncture and I always ask my patients really on the second visit a good acupuncturist should have you falling asleep on the table. That is what I would like them doing, calming things down and desensitizing your central nervous system. Guided imagery and meditation – we always talk about lifestyle modifications with patients. Cognitive behavioural therapy is excellent. On my end what I use are medications targeted at the nerves which we really already discussed in the prior talk and a series of peripheral nerve blocks. Those are the two things that I do.

Medications targeted at patient’s nerves; I use quite a bit of topical medications where you can use specific compounding pharmacies using gabapentin, Lyrica that we talked about earlier and you can mix them. A lot of times mixing with the lidocaine or you can mix them with a muscle relaxer, such as Baclofen and ketoprofen which is a NSAID. You can do a lot of things topically as well. For my patients who have associated vulvodynia with their endometriosis I recently have started doing this is in olive oil too so it does not irritate. You can use the medications as we have talked about. You have the anticonvulsants, which include the pregabalin, Neurontin and Topamax and then the antidepressants. These all help to calm down the nervous system – those hyper-excited.

These are just some pictures and you can see how everything is connected and you have the pudendal nerve running medially, the posterior femoral cutaneous nerve and then the muscles of the pelvic floor, particularly the piriformis, obturator and quadratus femoris. These are pictures of other nerves. You have the lateral femoral cutaneous nerve, iliohypogastric and their innervations. This is just an ultrasound picture which essentially everything I am doing into the pelvic floor is under ultrasound and you are using a lot of times the bony structures to really identify the muscles and the nerves. You have your piriformis specifically here, which is common with endometriosis patients because the piriformis really supports the pelvis and is an external rotator of the hip and part of the pelvic floor. Quite often endometriosis patients do have the piriformis spasm, which a lot of times they present to me as hip pain.

Another ultrasound image describing the proximity of the sciatic nerve and pudendal nerve related to the ischial spine. A picture of the guided needle going in.

This really shows how complex pain is and how important it is when you are managing pain to really draw in a multispecialty group and work in collaboration. Really, so many different factors are involved in a patient’s perception of pain and regulation of stress is extremely important, nutrition, diet, exercise really all play a strong role in the patient’s quality of life and their perception of their pain.

Lastly this picture, the noxious stimuli really is endometriosis. It is interesting to see for me I have seen patients pre and post-op a proper excision treatment, again, as we really hit home today it needs to be a proper excision treatment, but you can really see the difference even just touching them. Before surgery you will either swipe with cotton or you will do a gentle touch and they literally are often jumping off the table. Post-op, a couple of months, you will touch and you will notice the difference – much more calm. Really the why is you are getting rid of that noxious stimuli, it is important to really get rid of the noxious stimuli and stop the persistent inflammation. 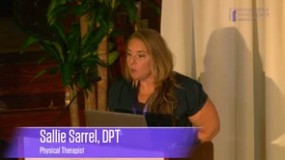 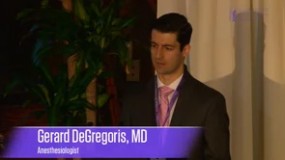 Gerard DeGregoris, MD - Why is there still pain?