Patient Awareness Day comes but once a year. Perhaps you’ve considered adding it to your calendar, seeing it as a great opportunity to enhance your knowledge of endo. But what if you learned that it could be even more than that — a  totally positive life-changing event.

When Melissa Boudreau first attended in 2018, she walked into the room, not knowing anyone, eager to absorb as much as possible. By the end of the day, she had made many new friends and allies and was well on her way to finding relief.

You know the routine, the inevitable missed days of school and work due to staggering cramps. Boudreau experienced it all, beginning with the onset of her period in early adolescence. “You’re just one of those girls,” the sweet grandmother who raised her said, the implication being that some suffer more than others. Not one to accept this prognosis, Boudreau sojourned on, determined to find a solution.

Since the pain was located predominantly in her stomach, her quest began at a gastroenterologist’s office. The diagnosis of IBS was swift and inaccurate. “I started researching IBS frantically,” Boudreau recalls. When she read that the vast majority of women who are diagnosed with IBS actually have endometriosis, Boudreau was certain that she had been misdiagnosed. At this time, in 2004, Boudreau had never even heard of endo. She ran to a bookstore, camped out on the floor and devoured two books on women’s health, tears streaming down her face.

Fast forward five surgeries and 14 years later when Boudreau found herself at Lenox Hill Hospital attending Patient Awareness Day in 2018. At the end of the day, she approached Dr. Tamar Seckin and introduced herself. “How are you feeling,” Dr. Seckin asked. Boudreau recounted her story, promptly booked a consultation and scheduled surgery. This time, surgery revealed that her bowel was completed obstructed. “I’m lucky to be alive.” Boudreau says. And then, after being one of many attendees at Patient Awareness Day in 2018, she took her seat on stage as a panelist at this year’s event. 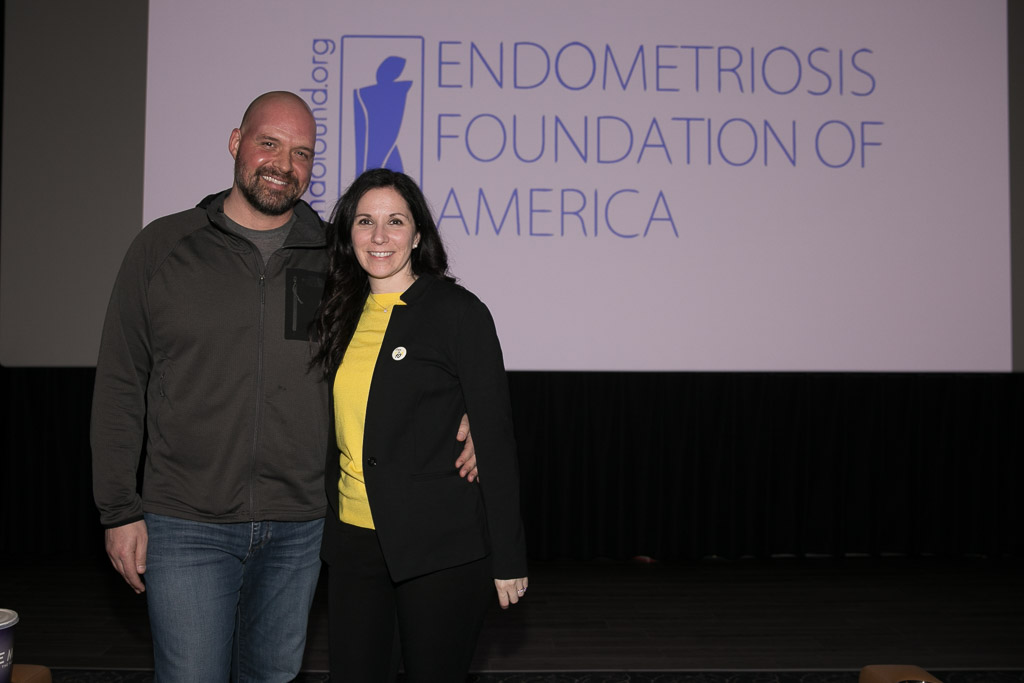 A week later, on March 14, Boudreau held her very own awareness event at the movie theater where she works in Detroit, Michigan. Concerned women and their friends and family were invited to view the first screening of “Five Feet Apart,” a film that focuses on cystic fibrosis, another chronic disease. The screening was preceded by a panel of women telling their stories. “The hugs afterward were empowering,” Boudreau says. Participants wore yellow, the color of endometriosis awareness. Boudreau donated a portion of the proceeds to The Endometriosis Foundation of America. When Itfitsbar, her company whose principal product is a protein bar that she designed, becomes profitable she intends to do the same, donating a portion of its revenue to the cause she holds dear.

For those interested in holding their own events, Boudreau insists that it be centered around something fun and include a gift (she provided copies of the book “Five Feet Apart,” popcorn and an Itfitsbar. Marketing is key; for this particular event targeting, women in Michigan on Facebook proved extremely effective. Go ahead, be inspired, organize your own awareness event today.

Interested in hosting your own event? Email events@endofound.org to get started!

What’s the Best Exercise for Me?