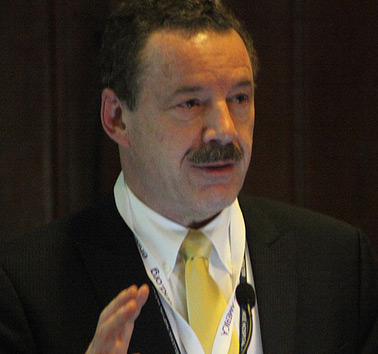 One of the characteristics, one of the sine qua non of stem cells, their definition includes not only their pluripotency but also their relative immortality. Critical to that is their ability to evade nature's timer, nature's hourglass, the telomeres, the repetitive sequences of TTHEG in the case of mammals and most vertebrates that cap the ends of linear chromosomes. The enzyme that is responsible for maintenance of this telomere race, telomere race the enzyme that can restore the telomere instead they are chipped away with every cell division that are chipped away even as we sit here with the reactive oxygen that is attacking us, and oxidizing the...rich sequence of these caps of the ends of chromosomes.

Telomerase and telomeres are absolutely essential for the function of the stem cell. Interestingly, the endometrium is the richest source of stem cells in the body, apart from the source of male germ cells at the testicle, and also the gut, which also has very high levels of telomerase. The endometrium is very, very rich in its basalis in telomerase, this enzyme that can restore the telomeres and avoid the inevitable death that comes from incessant cell divisions and attacked by reactive oxygen.

A prior study published a couple of years ago showed that eutopic endometrium of patients with endometriosis actually have elevated telomere length in the endometrium itself. We wondered since hematopoietic stem cells have longer telomeres than other blood cells because they are stem cells, and that if this is true the theory of HSC seeding of endometrium and endometriosis is true then patients with endometriosis should have in their blood longer telomeres than those who do not have endometriosis. We took from Maurice's very busy endometriosis practice a cohort of patients that had video laparoscopy diagnosed and confirmed pathologically endometriosis and those without were matched for age. The clinical information was extracted before the de identification, took their blood and extracted the DNA from the blood, from the leukocytes then measured telomere length by a method called qPCR that is one of the gold standards and is pretty scalable. Then we used appropriate statistics and this is a busy slide. It is just to tell you that matched worked. There were no significant differences in the two except for infertility which was higher in the patients with endometriosis.

This very robust difference in telomere length in the peripheral leukocytes is unequivocal. It does not appear to be related to the staging, whichever staging system we use, nor the extent of infiltration. We wondered whether this is more to do with the seeding process rather than the maintenance and we wondered whether this is associated with an increased circulating concentration of these cells in the patients with endometriosis, or potentially increased efficiency of telomerase. So I was intrigued by the prior lecture on personalized medicine because one of the hottest areas in cancer biology now is identifying mutations or variance either in the telomerase genes, the genes that encode the proteins that control telomere length, or in those that are in the CIS regulatory region of it suggesting that telomerase is a major gene implicated in cancer.

This then raises the question we have heard about the association between endometriosis and ovarian cancer. Potentially this could be a common link that is linking the two. While it was not related to staging it was a fairly robust difference and we wondered whether this could be a biomarker of endometriosis from blood. That of course requires a clinical study because there are a lot of other things that also could contribute to longer telomeres in the blood. So it would entail a fairly sophisticated algorithm, controlling for smoking, age and body mass index and so on. 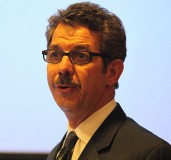 Beyond Molecules and Robotics– the Future Treatment of Endometriosis - Ceana Nezhat, MD 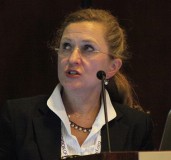