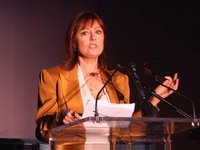 I am not going to do a long introduction because this woman really needs no introduction. She is gorgeous. She is a thinker and a doer. She is a great artist.  She is a mother, an activist, she is Susan Sarandon. Please put your hands together.

I love that Padma’s giving, you know, her expertise on the food; she cannot stop criticizing the food. Okay, I have a very short thing that I want to say but because you have been so attentive, and thank you all for coming, I am going to actually read a testimonial because we have not had one yet, then I will do my thing.

“I have missed out on many of things because I have been attached to my heating pad and glued to my bed. I refuse to take this disease lying down. I suffered with pain and infertility for several years, saw many doctors and was not diagnosed until age 40. I was never educated about endometriosis and as a result have ended up with another terrible disease because of it. I want to suggest that your foundation educates women about not taking "No" for an answer from your doctor. I get so angry sometimes thinking about how if I had been listened to by my doctor a few years earlier I most likely would not have another disease, and could possibly have kept my ovaries. Since my operation I have discovered many other women dealing with this condition. I truly believe it should be discussed with young women when they are taught about female reproduction. While my family has been by my side all this time, some of them did not realize what I have been battling for many years until they saw your interview on the Today Show. I did not know myself. When all you know is pain, you do not know that that is not normal. I even had female doctors tell me I was imagining my problem.

Ending up in major surgery, I am now extremely careful about finding the right doctor to treat me. While things have turned out the better for me, early detection is key in my opinion to avoid major procedures like colon resection. This is a long thank you for speaking publically about this problem. I have told friends and families and have been encouraging people to ask me questions. I dread to think another woman might have to go through what I experienced. If they get treated sooner, they might avoid so much pain and complication”.

That is a very typical but positive story because it ended well.

Suffering should not define you as a woman. I know we do it well, I know we are very competent, but those movies were made a long time ago, we can establish a new scenario.

Endometriosis affects the fabric of a woman's life and every member of her family and those at her workplace. It affects her emotional well being, her power to earn a living, her ability to become a mother. Now for you guys in the audience, just because you are a man does not mean it does not affect you. Just because you are a man does not mean that you cannot help. If your sister or your girlfriend or your wife, or your daughter is suffering every month, missing work or social obligations, and it is too difficult to talk about it, go online and tell her where she can get information. Do whatever you can to help her remove the taboo and the loneliness of this disease. Be understanding, have empathy, and whatever you do, do not accuse her of being sensitive, delicate, and overly dramatic. This is a big opportunity for you guys, you can say and show that you care. This is your opportunity to be a real man. Obviously the gals are just waiting for you to be a real man.

I was diagnosed with endometriosis actually in England when I was doing The Hunger. I had always had really…woohoo yeah!...I had difficult periods. I had been through, you know, the fainting, all the business when I was in college and finally when I was in England I started to just bleed for no reason. I went in and I had a procedure and they looked. This is right before I had my scene with Catherine Deneuve by the way. It was not good foreplay at all. So what they said was, “Okay, you have endometriosis”. I had no idea what that was. They did not explain it to me. They said, “You know, if you ever want a child, you will probably have to have surgery. What we will do for you now, and you will be perfectly fine, is we will just put you on a whole bunch of birth control pills. You will not get your period. We will give you painkillers when you finally go off them”. I do not know how I managed with that kind of half-assed diagnosis and to then had not used birth control for many, many years. Then a miracle happened and I found myself pregnant with my daughter, and then somehow managed to again be surprised two more times and have three children. I am definitely one of the lucky ones. You know what we have to do is make sure that when, as this woman said in her testimonial, we talk about it and we remove the taboo woman to woman, you know mother to daughter, and when someone is having symptoms, if you can woman to woman advise them that it could be something bigger than just your normal suffering that women are destined to have.

Yes, so that is about the only thing I have to say, that my story ended happily and I am sure because you are here tonight we can make sure that there are many more happy endings. What is fabulous about this group is that there is no mystery involved. You know it is really just a question of passing the word, getting the money, and making sure that not only the public is educated, and young girls are educated, but that doctors are educated because all the testimonials that I have been reading show that there is an enormous amount of just either missed diagnosis, or not going far enough, or pawning you off to somebody else. We have to make sure that you listen to what your body is telling you. If you have that kind of pain it is not normal, it does not have to be. Find somebody who will listen to you and make sure that they listen to you all the way. When you have that feeling that something is wrong, or it might be something bigger than what they are telling you or medicating you for, press, press, press, because when caught early enough, you know it does not have to turn into something that is going to rob you of such a huge piece of your life. It really can make a big, big difference to your quality of life.

In all the other areas where we are so careful, let us pay as much attention to our pain and our private parts, as Padma would say. And proceed with the potatoes with caution. 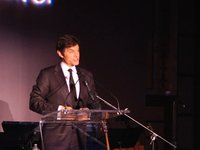