Is there a link between leaky gut and endometriosis? Little research has been done in studying the two together, even though endo often invades the bowels.

But Dr. Shanti Mohling, a minimally-invasive gynecological surgeon, and researcher at the University of Tennesee is on a quest to find out why. Mohling, whose research is funded by EndoFound, has noticed a correlation between intestinal permeability, commonly known as leaky gut—a condition in which bacteria and toxins pass through the intestinal wall and into the bloodstream—and the presence of endometriosis. 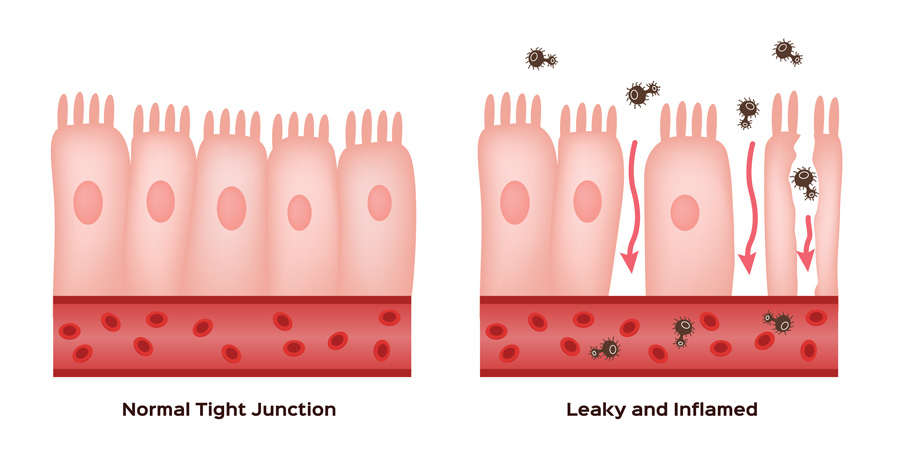 Above: An illustration of leaky gut

Mohling says she had a lightbulb moment while studying zonulin, a protein molecule linked to inflammation. "I looked at this model, which, also applied to Type I Diabetes, Ankylosing spondylitis (arthritis of the spine), and probably MS and Hashimoto's Disease, and, I thought, Maybe endometriosis also fits this model?”

RELATED: How One Researcher Is Turning Her Suffering Into Scientific Progress

Just as she followed that hunch, she hit a stumbling block. Mohling says that when she began her studies in 2015, there was no public availability of zonulin tests, so she got creative and turned her focus to urine cultures and the measure of lactulose and mannitol, two sugars that are often measured in the urine to diagnose leaky gut. “If you have lactulose in the urine to any high degree, it demonstrates that you've got intestinal permeability because it's a big molecule. So, instead of measuring zonulin, I had patients drink this sugar drink and then collect their urine for six hours.” The ratio of both sugars in the urine, she says, gives a similar result to measuring zonulin and leaky gut.

Mohling currently has 40 patients registered for the study and says she bases her findings on 25 samples collected.

Mohling's research is a labor of love. Before starting medical school, she took a job as a massage therapist and took an interest in clients with chronic pain. "The reason why I'm interested in endometriosis is that I'm interested in caring for women with pain and helping them get through it. So few physicians want to deal with that.”

This Australian Woman Flew 9,940 Miles to America for Her Endometriosis Surgery