It was 2014, and the uncomfortable stickiness of summer had roused her from an afternoon nap.
“I woke up, and my chest was feeling a bit heavy,” says Latia Lee, 38. “I felt a little short of breath.”
She was frightened, but not panicked. Lee, a registered nurse at Weill Cornell Medicine in Manhattan, got into her car and drove to an urgent care facility near her Islip, NY home where a nurse, suspecting bronchial spasms, gave her a nebulizer with steroids.“She was going to send me home, but when she started to hear this horrible cough that I had, she said, ‘Let’s rule out a pulmonary embolism.’”
The nurse sent Lee, then 34, to a nearby radiology center and a chest scan revealed a pneumothorax or a lung collapse. “The thing was, I had my [menstrual] cycle. I didn’t put two and two together though. I was on the second day of my cycle. But I just thought, ‘This sucks. Now I have a collapsed lung, and I have my cycle—this is horrible.’”

Lee rushed to the nearest ER. An attending doctor ordered a chest tube to be placed into her lung to temporarily reflate it, but not before making a haunting observation. “She said, ‘You don’t fit the typical description of someone who would have a spontaneous pneumothorax,’” recalls Lee. “But she didn’t dig a little deeper into it.” She went into surgery where doctors would perform mechanical pleurodesis, a procedure in which a surgeon creates scarring between both lung linings, or pleura, making the two layers stick together, to avoid future collapse.

Doctors found blebs or cysts in her lung, and they had ruptured, leading to the collapse. When Lee awoke from that nearly 3-hour long surgery, however, she didn’t feel 100 percent. “In hindsight, I was still having chest symptoms.” She remained in the hospital for eight days. Her symptoms didn’t improve. “I was still short of breath.” Doctors told her that, thanks to the pleurodesis, she had only a 10 percent chance of experiencing another lung collapse. She followed up by visiting a cardiologist and a pulmonologist, but neither yielded any relief or answers. Two years later, her right lung collapsed again.

Lee recalled she had her first period at the age 14, and from the start, her cramps were so debilitating she often missed school. An OB-GYN prescribed Loestrine, a low-estrogen birth control, to help make her periods shorter and lighter. It worked—but with the pill came plenty of unwelcome side effects like migraines and weight gain. She cycled on and off of it into her 20s while a nursing student at SUNY Stony Brook University. When she took breaks from the Loestrin, her period pain was “10 out of 10. I mean, I would miss work, I would miss social events. Like all my friends knew, ‘Ok ‘Tia is the person who has really bad cramps.’ I had pelvic pressure, bladder pain, I would have severe abdominal pain. I was bloated. I would have chest pain, shoulder pain, migraines and arm pain.” Her acting OB-GYN, a nurse practitioner, said it was all caused by the position of her uterus. Meanwhile, Lee downed multiple doses of Advil and Tylenol. In March 2016, she got ready for work when she felt that same chest tightness as she did during that hot summer day. She decided to commute to work with her mother anyway. En-route to Manhattan from Long Island on the train: “I’m like, ‘Mom, I think my lung collapsed again.’”  A chest scan confirmed Lee’s fears. And she realized she was, again, on day two of her menstrual cycle. “And that’s when I was like, ‘Something’s not right. I started putting two and two together and started Googling, and that’s when I saw this catamenial pneumothorax.”

RELATED: The Woman Was Fit and Healthy, Why Did Her Lung Mysteriously Collapse

Catamenial pneumothorax occurs when endometrial cells make their way up past the diaphragm and into the chest. Once there, endometrial tissue reacts to the monthly fluctuations of estrogen and progesterone, just like in the uterus, causing pain and bleeding and cyclical collapse of the lung. Catamenial is derived from the Greek word for monthly. 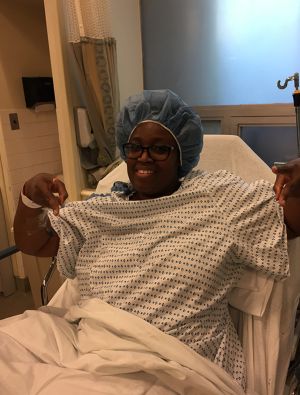 Lee was convinced she had catamenial pneumothorax—now she had to find a doctor who believed her. “I found a new pulmonologist,” she recalls, “at first when I said I had catamenial pneumothorax he was like, Huh? I’m pretty sure he had never treated someone who had it.” But, after he reviewed her pathology reports, he encouraged her to find an endometriosis specialist. “He was the first person who had actually mentioned endometriosis to me. I started researching endometriosis and realized I have every single symptom of endometriosis.”  That led her to Dr. Tamer Seckin. “I told Dr. Seckin, ‘Listen, I know I have pelvic endometriosis, I know I have catamenial pneumothorax, I know I have thoracic endometriosis—I need you to help me.” Seckin ordered up an MRI and advised her to see his team of specialists for pre-ops including a thoracic surgeon, colorectal specialist, and a urologist. As she made the rounds, her lung collapsed again, for the fourth time, in January 2017. Surgery day came soon after, and six surgeons went to work on Lee inside Lenox Hill Hospital. Endometriosis was excised from Lee’s lung, and she had yet another pleurodesis. Next, it was on to her pelvis. Lee needed a bowel resection to remove deep infiltrating endometriosis (DIE). Endo was also found in her ureters, and it had bound her appendix and parts of her small and large intestine. In all, the surgery lasted seven hours and a total of 16 procedures were performed. “When I finally saw Dr. Seckin, he told me I had Stage IV Endometriosis, but if there were a Stage V or VI, ‘That would be you.’” 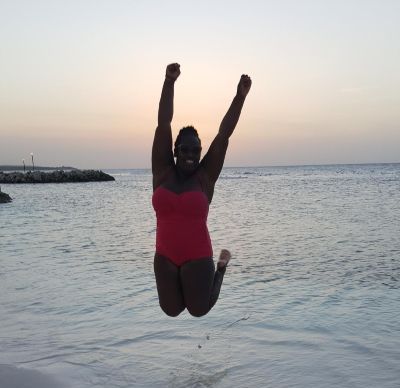 Still, the worst wasn’t over for Lee. Eight weeks after her marathon surgery, she experienced excruciating rectal pain. Seckin ordered another MRI and found a brand-new nodule in her cul-de-sac, which is the cavity between the rectum and back wall of the uterus. It took Seckin and a colorectal specialist three hours to excise the mass, which pathology later confirmed was endometriosis.

After 23 years of suffering, Lee says she feels like a new woman. “I have my cycles now, and I have cramps, but I take some Motrin, and 20 minutes later, they go away. And I no longer have that heaviness or chest pain or a horrible cough anymore. It’s just totally different.” With her health restored, she’s dreaming of a new chapter.
“If I can’t have a baby, then I’ll adopt. I definitely want to be a mom.”

Is There A Link Between Leaky Gut and Endo? This Researcher Thinks So

Can You Have Endo Excision Surgery Minus the Downtime? This Doc Says Yes