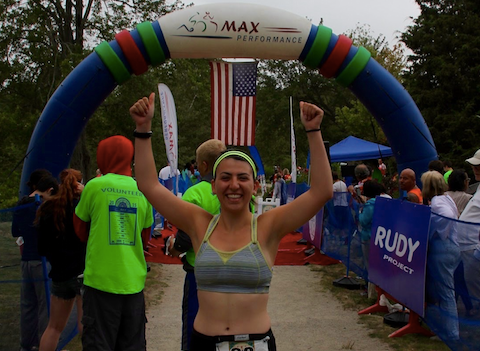 Hannah: I participated in the Max Performance’s Sharon Triathlon on August 9th, 2015.  A triathlon for different causes and participants, I represented the organization I founded, Winning & Grinning, a women’s empowerment group for women with endometriosis.

Endofound: What inspired you to host the fundraiser?

Hannah: After my diagnostic surgery for endometriosis in July 2014, I founded Winning & Grinning as a positive, motivational space for women to express their achievements despite their endometriosis. This has been extremely well received and hundreds of women have sent in their stories and pictures of their successes despite their disease, providing encouragement to women in the group, and myself.

Endofound: How many years have you been hosting this fundraiser?

Hannah: This was my first time participating in the Sharon Triathlon. Almost exactly one year prior to finishing the triathlon, I had to watch from the sidelines as my father completed the triathlon because I was still recovering from surgery. I knew that the next year I would finish the triathlon with him, and fight back against my endometriosis.

Endofound: How long did it take for you to organize the fundraiser?

Hannah: I began fundraising and training in June for the triathlon.

Endofound: Who all was involved in planning the fundraiser?

Hannah: My father, an incredible support throughout my endometriosis journey, trained and motivated me during training in order to be able to finish the triathlon. Both my mother and father have been critical aspects of helping me find a healthy lifestyle, while dealing with endometriosis, and they carried that encouragement and help throughout training and fundraising.

Endofound: Is there anything you would have done differently?

Hannah: Next year I will fundraise more intensely to raise more money – Oh, and I’ll beat my time.

Endofound: How old were you when you were diagnosed with endometriosis?

Hannah: I was diagnosed after four years of painful periods and everyday pain. I am passionate about educating young girls about endometriosis, so they can learn about their options and stop their pain and possible future infertility. By donating to Endofound, I know the ENPOWR project will succeed in providing early education to girls, as well as search for a cure for endometriosis.

Hannah: Supporting Endofound means supporting early education and intervention in young women, decreasing long-term pain and damage to internal organs. This is crucial for the well-being of women everywhere, especially as Endofound works to find a cure for endometriosis.

Hannah: I would have sought out a more skilled specialist and understood that my pain and periods were not normal because I would have known there were options and people who could help me.

Endofound: What advice would you offer for anyone who might be interested in organizing a fundraiser for Endofound?

Hannah: This was an incredibly rewarding process, and I look forward to fundraising for Endofound in the future. Endofound was incredibly supportive throughout the process of my training and fundraising, checking in on me, and giving me all the important information I needed for donating in a very straightforward way.