What do dogs, pigs, and sheep have to do with endometriosis in humans? Emy Varughese, 30, is a small animal veterinarian at Banfield Pet Hospital in Springfield, Ohio and, after being diagnosed with endometriosis, she's on a mission to find out.

Varughese says she and her supervisor, Dr. Jaswant Singh, conducted endo-related animal studies as part of her Master's research project at Western College of Veterinary Medicine, Saskatoon, Saskatchewan, Canada, where she observed the growth of endometriosis lesions and experimented with how to better visualize it in its early stages. Even though the four-legged animals don’t have a menstrual cycle as humans do, Varughese says we still have lots in common with their reproductive biology. 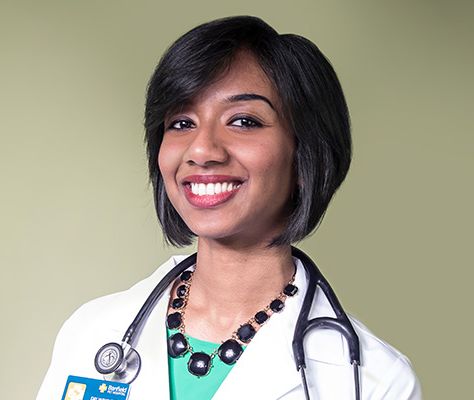 She and her team started small, she says, looking just at the peritoneum, or the membrane lining the cavity of the abdomen, and the endometrium, the membrane lining the uterus, in the cadavers. In humans with endo, endometrial tissue can often migrate to the peritoneum, among other places, and cause lots of pain. When Varughese harvested both types of cells in the same petri dish, the two attached—a breakthrough for Varughese. “So [my team and I] were like, if we do the same thing in a live animal then there is a very high chance that it would attach and do something.”

Next, Varughese worked with live sheep, dogs, and pigs to see just how endometriosis lesions develop. After surgically removing the animals' wombs, her team separated the uterine lining. “We wanted to see what would happen in these animals if we placed [the tissue] in places other than the uterus.” The result? The animals developed endometriosis in different regions of the pelvis. The dogs, in particular, she says, were most reactive to the study, developing endometriomas, or endometriosis-filled cysts.

After getting so hands-on with the animal's anatomy, Varughese says she and her team then experimented with visualizing endometriosis from the outside in.

In humans, says Varughese, “we lack an imaging modality that is capable of detecting endometriosis at an early stage especially because lesions can be very small.” Imaging studies using ultrasound, MRI and PET-CT, she says, proved that MRI provided the most definitive diagnostic images of endometriotic cysts in dogs.

Varughese says that these initial studies, the results of which will soon be published, show promise and she plans to continue experimenting until she can find a better way to detect and diagnose endometriosis. “I think the more I advocate about the disease and talk about it, the more awareness I'm giving, and that makes me proud.”