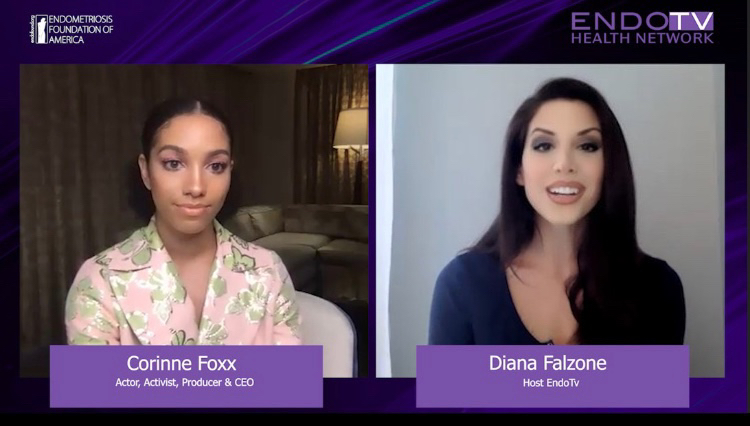 As an ambassador for EndoFound, Foxx will advocate for endometriosis awareness, education, legislation and participate in special events and fundraising initiatives.

"I am ecstatic to join the Endometriosis Foundation of America as their newest ambassador," said Foxx. "A huge part of my own journey with endometriosis has been speaking with other endo warriors about their own experience with the disease and I am excited to publicly advocate for awareness and conversation around endo."

"A huge welcome to our newest ambassador, Corinne Foxx who will work with us to further awareness around endometriosis in order to better advocate for patients – 1 in 10 individuals and 200 million worldwide. Corinne's own story reflects that of so many and we hope by amplifying her experience, we can help even more current and future patients," said EndoFound Executive Director Margaret Caspler Cianci

Foxx's interview covers her painful endometriosis symptoms, her surgery, and how despite her close relationship with her dad [Jamie Foxx], finding the confidence to tell him about her diagnosis. She touches on the stigma of discussing the disease and reflects on finding out that both her mother and grandmother had endo after her diagnosis.  She has found strength and support in the endometriosis community, in Facebook groups, and through story sharing with other endo warriors.

EndoTV is a digital health network on YouTube, executive produced by veteran journalist Diana Falzone, who is also hosting the network's flagship show, "Let's Talk...Period". A 30-minute digital program airing on YouTube hosted by journalist and endometriosis advocate Diana Falzone.  Guests are prominent voices in the endo community, such as celebrities, and pioneering doctors. The goal is to increase endo awareness and amplify other health issues.

EndoFound is the country’s largest non-profit 501(c)(3) organization dedicated to increasing disease recognition, providing advocacy, facilitating expert surgical training, and funding landmark research for endometriosis. Engaged in a robust campaign to inform both the medical community and the public, EndoFound places particular emphasis on the critical importance of early diagnosis and effective intervention while simultaneously providing education to medical professionals and their patients. To learn more or get involved go to www.endofound.org/.