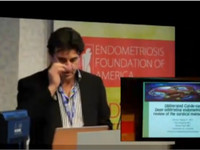 Thank you very much; it is my pleasure to be here. I would like to thank Tamer for inviting me.

I will be talking to you about the obliterated cul-de-sac dissection. This talk is actually the basis of two research projects that I did with my fellows. I do not claim that I am an endometriosis surgeon expert, but I do endometriosis surgery. Two years ago Dr Patrick Yeung, who is currently on the faculty of Duke, and I did research where we looked at data and did the meta-analysis of research looking at deep infiltrating endometriosis and I apologize to Harry because I am still using that term, maybe I maybe I should change my terminology in my slides. The next one is my last fellow Dr J. Hudgens who did with me a film actually, showing the approach to rectovaginal endometriosis.

If we are looking at the prevalence of endometriosis it is probably estimated to be five percent of deep endo.

Anatomic distribution is more often found on the uterosacral ligaments and then in decreasing order, vagina, then next is the interstitial tissue around the muscularis propria and then the next organ would be the bladder that is affected by this disease, and there are several classifications. Most of us usually currently use r-ASRM classifications, which are not really ideal. Then Dr Adamian did a classification looking from the surgical aspect, dividing the disease in rectrocervical, rectovaginal septum and then bowel endometriosis. Most of these really are mostly correlated to the surgical aspect and there is a poor correlation with pain. Chapron also did a classification which currently Chuck Millar and Mauricio Abrao are working on the next classification system.

What treatment options do we have? One of them is obviously do nothing. Then the next one could be a medical treatment with Lupron and we will address that, and then the surgical treatment, which most of us agree that is probably currently the best treatment for endometriosis. We can also do a combination of surgical management plus medical treatment and the question is do we do the medical treatment before or after and what are the best results? In order to answer that question my fellow Patrick Yeung and I did the study that was published in JMag Journal. We looked at 68 randomized, controlled trials and six review articles on endometriosis. We did meta-analysis with the primary goal to ask our questions based on these clinical concerns. We only used randomized control trials and ended up with 37 different studies. The first thing was to look and ask a simple question, “Is conservative surgery for rectovaginal septum endometriosis beneficial for pain?”, and according to all these people here, you can see the definitive answer and the number of patients, and it looks like yes, conservative surgery helps pain. There are more studies here including David’s and they all came up with similar conclusions. The next question was “Is conservative surgery for rectovaginal septum endometriosis beneficial for fertility?”, and the majority of the studies really showed that it is not but it does not seem to be harmful for infertility. We looked at radical surgery for pain and it looked like the definitive diagnosis is that radical surgery does help pain. The next thing is we looked at the bowel resection and pain and all these studies show that there is a benefit for radical bowel resection when the final outcome is pain. We then looked at the studies of bowel resection affecting fertility and it really did not show that radical bowel resection had a positive effect on fertility.

Surgical treatment of the disease really is most important. There are several steps and we tried to design the process of how to deal with this issue. The first would be identification of disease and then like in any laparoscopic surgery would be restoration of normal anatomy, which means ureterolysis dissection of the rectovaginal septum and then excision of the disease. Then the fourth step would be reconstruction. As I mentioned before there are a lot of gynecological surgeons out there. There are great minimally invasive surgeons they all do laparoscopy but most of them just to hysterectomy, which is not really a difficult procedure. In hysterectomy they all stay within the boundaries of the peritoneum and hardly anybody ever ventures beyond the peritoneum to do surgery, which really represents a most difficult kind of surgery, retroperitoneal surgery. I am going to show you a small film; maybe not…I was just going to refresh your memory of the retroperitoneal spaces in surgical dissection.

Now we come to the second part of my talk. My fellow, Dr Hudgens and I just finished the film of actual systematic approach to this disease and I will show the film. The presence of deeply infiltrative endometriosis and the resulting alteration of normal anatomical planes make this one of the most challenging surgical cases that gynecologists encounter. The laparoscopic treatment of this disease requires an intimate understanding and application of pelvic anatomy. The purpose of this video is to present a systematic approach to the laparoscopic dissection of an obliterated cul-de-sac and the resection of rectovaginal endometriosis based upon these principles.

We have divided the dissection into four parts which are: ureterolysis, dissection of the rectovaginal septum, excision of the rectovaginal nodule and reconstruction. During the early progression of endometriosis implants arise over the ovarian fossa and uterosacral ligaments. As inflammation and scarring occur the ovaries can become adherent to the pelvic side wall. Adhesions may develop between these endometriotic implants and the sigmoid and obliteration of the cul-de-sac results for the progression of this scar formation. The relationship of the avascular spaces and their relevance to the dissection of the obliterated cul-de-sac and excision of rectovaginal endometriosis will be reviewed.

The ureter enters the pelvis over the bifurcation of the common iliac and medial to the infundibulopelvic ligament.

The reason we decided to do this is because a lot of surgeons approach mass directly. Some surgeons kind of do an anatomical resection.

“The dissection is continued in the fat/non-fat interface until the ureter is identified. The ureter is surrounded by a layer of loose areolar tissue and this layer is entered by using a blunt grasper to dissect parallel to the ureter. Ureterolysis is continued until the ureter enters the cardinal ligament. When complete obliteration of the cul-de-sac is present and the uterosacral ligaments are obscured bilaterally ureterolysis is carried out on the opposite side. The peritoneum is again entered superior to the ureter. Medial traction is placed on the peritoneum and the ureter is identified along with fat/non-fat interface. The areolar plane surrounding the ureter is entered by dissecting parallel to the ureter. The dissection is again continued in a looser areolar plane to the level of the cardinal ligament.”

So once we safely identify the ureters and get them out of the way then we can approach the mass.

We personally use the Harmonic Scalpel, I think it is a great instrument for this type of dissection, although unipolar scissors are also great and the majority of the European colleagues they use unipolar scissors. But you see why I mentioned that you have to put it on high wattage.

“The uterosacral ligament is again transected and the rectovaginal space is entered. If the dissection is continued too superiorly to avoid rectal injury the posterior vaginal fascia is transected then the vagina may be entered. If this occurs the fascia is retracted superiorly and the rectum inferiorly to help identify the correct dissection plane.

By understanding the anatomic principle that fat belongs to the rectum the fat/non-fat interface is identified, which facilitates dissection superior to the fat. The dissection is continued until the space is fully developed.

The ureter is identified along the pelvic sidewall with medial traction of the inferior edge of the peritoneum”.

Usually we do not use any energy for ureterolysis. You can use Harmonic but there is no need.

“The areolar space surrounding the ureter is again entered by dissecting parallel to the ureter and the ureterolysis is continued to the level of the cardinal ligament. The lateral rectal pillar is identified and sacrificed in this case to facilitate complete excision of the nodule. The uterosacral ligament is then transected and the rectovaginal space is entered and the nodule excised.

A portion of the lesion may be attached to the posterior vagina or the rectum as illustrated here. The rectal probe is used to help delineate the rectum for the remaining lesion and a lesion can be dissected bluntly or may require excision with sharp scissors. Rectal wall integrity is confirmed with the ejection of dilute indigo carmine through an 18 French Foley catheter placed in the rectum or via an air leak test performed with the aid of a proctoscope. If the posterior vaginal wall was entered during the dissection it can be re-approximated with interrupted or figure of eight sutures.

We feel that following this systematic and anatomical approach to the obliterated cul-de-sac and rectovaginal endometriotic lesions allows for more effective and efficient treatment of these conditions”.

As I said Dr Hudgens said in that conclusion it is very important to have a systematic approach. For those of you that follow LISTSERVE you may have heard David’s comments on _____ surgeons doing endometriotic cases and as you know there are few of them I guess in the country.

Jokingly I sent David an email and I said, “Look at this film and let me know if I qualify”. But I have bad news for you David, LISTSERVE is down for a week, so you are going to have withdrawal syndrome.

Reconstruction is really important, which is to check and make sure you do not have any lesions to the ureters or the rectum. That is done with the indigo carmine diluted. Also, laparoscopic vaginal closure and rectal closure if you get into pain.

So the conclusion of this talk would be that when pain is considered it is surgery plus medical treatment that is beneficial, and for patients with fertility issues surgical treatment is first line, and then try to get pregnant. Then we all agree that surgical approach is the best option to treat patients with this type of disease. 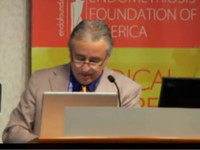 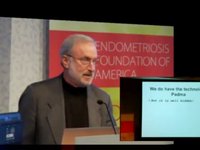