It’s one thing to see injustice and wants to make a difference. It’s another to lead the charge.

Elizabeth Folarin, 33, and Karleen Jones, 37, were just thumbing through a newspaper when inspiration struck for their London-based women's-focused outreach group, Periodical Diary. 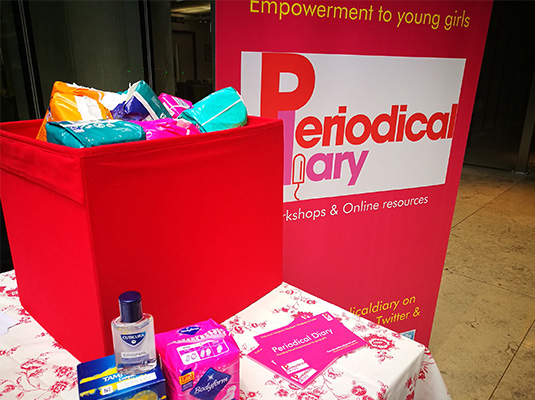 We found an article in our national paper about homeless women on their periods," Folarin tell The Blossom, "and we had such an amazing conversation about period poverty. It sounds so obvious, but, oh my God, of course, if you're homeless and a woman, you have periods, too. How do you manage that? We got to a point where we were just drinking tea and we thought, we could either have this conversation and be like, 'Oh, that's a shame,' or, 'actually we could maybe try and do something about it.'”

Do something about it they did—the duo later formed Periodical in January 2017, and they regularly hold sanitary napkin drives and then deliver the goods to schools and women in need. Folarin, who is also a mental health social worker, says she has heard firsthand the struggles of having a period while living well below the poverty line.

“You've got a family of five or six; maybe it's got four girls in there. They're using tissue and newspaper, and that's what they've told me. We've sat down and spoken to food banks about what people come in for, and they said people do request a lot of sanitary [napkins] because they can't afford it because they are choosing between having meals or trying to meet the needs of their periods.”

After witnessing that heartwrenching reality firsthand, Periodical has made it their mission to educate the public about how periods, and the stigma and silence that surround them, makes accessing menstrual products all the more difficult.
“If you're not talking about having a period, how on earth are you going to say, 'I can't afford to meet the needs of my period?'. There's an air of misogyny about it because I think, with women just in general, and our bodies, anything that comes out of a woman, unless it's not to please the man, is seen negatively.”

Folarin says she also holds workshops to help lift the taboo from topics like period management and tracking period symptoms with young women, information that, she hopes, may sooner help a woman discover she has PCOS or endometriosis.

And Folarin says she's just getting warmed up.

She says she's running for local government and plans to petition government officials to subsidize sanitary products for school-aged girls. “I’m so passionate about period poverty," adds Folarin. "I can’t make my whole campaign about women’s health, but I thought having more women in places of power can help drive that shift.”

One Researcher is Turning her Suffering into Scientific Progress

How Celmatix's CEO Almost Gave Birth in an Uber, and Her Plans to Help Endo Women Everywhere