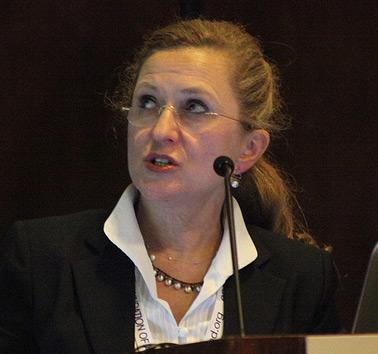 As outlined I find many surgeons in front of me I just want to touch upon the recent alterations in the classification of ovarian cancer, which resulted in a paradigm shift. Then I will talk about the pathogenesis of endometrium-related ovarian carcinomas. As you all know perfectly well the most recent WHO classification was in 2003 and we thought that serous carcinoma which resembles fallopian epithelium was derived from the ovary and endometriosis carcinoma also, which resembles endometrium was derived from the ovary. This was the resemblance which made us call those tumors due to differentiation. The concept of histogenesis and differentiation are now perfectly well understood that they are flawed because they were all accepted that they were derived from surface epithelium of the ovary.

From risk reducing salpingo-oophorectomies from PIC patients we now understand perfectly well from 2006, although several years there may be some people who are not aware of this, we know perfectly well that it is the tubal fimbria with tubal intraepithelial carcinoma which causes serous ovarian carcinomas. At least most of them. Or, those cells from tubal epithelium, which locate on the ovary and act as inclusion cysts within the ovary are the main cause of serous type of ovarian cancer. Type I and type II ovarian carcinomas are separated, especially serous type ovarian cancers being derived from fallopian tube which have different genetic alterations. We recently started to understand that ovarian, epithelial ovarian cancer origin is extra-ovarian. Now we should talk about non-ovarian origins of ovarian cancer.

Why do we call that they are endometrium related? First of all we have histopathological evidence that the tumor arising from endometriotic counterpart, which is located just next to it and we have clear cut epidemiological evidence published last year that clear cell and endometrioid carcinomas have a very high incidence of being associated with even self reported endometriosis. We also have transcriptome profile evidence that clear cell and endometrioid carcinomas of the ovary have transcriptome similarities with eutopic endometrium.

Let us first go to other molecular alterations occurring in the endometrium related cancers, other than ARID1A, and I want to talk about ARID1A at the end. We have beta-catenin mutations. The gene is called CTNNB1 and the protein is called beta-catenin, which occur only in the endometrioid type ovarian cancers and also in eutopic endometrium cancers. We also have PIK3CA/PTEN mutations in both endometrioid and clear cell carcinomas.

So, what is beta-catenin? What is its implication? What does it do? Beta-catenin is a gene which is located on a small arm of chromosome 3p and it normally complexes with E cadherin to form singular adhesions and normally it is a molecule of WNT receptor pathway. It normally destructs by adenomatous polyposis coli gene destruction complex. Then the cell does not have to proliferate. On the other hand in the instances where the cell needs proliferation in the existence of the WNT signals this complex is dissolved and beta-catenin is located to the transcriptome site to make the cell proliferate. That is why beta-catenin has a very important role in the cell proliferation.

What happens if beta-catenin is mutated? Even in the absence of proliferation signals this complex cannot form and a mutant beta-catenin would locate to the nucleus, accumulate within the nucleus and cause abnormal proliferation, which can be called neoplastic transformation. Of course, at the same time the cell to cell adhesion will also not be probable.

Another molecule, or other two molecules, PI3kinase and PTEN, which refers to phosphatase and tensin homolog which is tumor suppressor surgery located on chromosome 10 have important implications in saying that normally PI3kinase double phosphates to triple phosphates to cause cell survival and proliferation. It also interrupts with apoptosis and causes proliferation. On the other hand PTEN, which is totally opposite of PI3kinase, acts as a tumor suppressor or proliferation suppressor and it causes interruption with clear cell survival and causes apoptosis at the end. Our group has observed activating P13kinase mutations in up to 33 percent of clear cell carcinoma. In terms of PTEN, PTEN mutations are the most common and earliest gene mutations observed in eutopic corpus cancers, eutopic endometrial cancers. But their abnormality is less in endometrium related ovarian cancers. However, we have high percentage both in endometriosis and endometrioid type endometrial cancer. This is the summary where PI3kinase causes survival proliferation and PTEN totally acts the opposite.

In fact, I should say that molecularly targetable drugs in terms of PI3kinase and PTEN pathway are quite successful and is already under research.

My main purpose was to talk about our study of ARID1A mutation, which occurs in clear cell endometrioid carcinoma, which is supported by Endometriosis Foundation of America. Why did we select ARID1A? Because two groups, one group from Hopkins that I realize this study and the other group from Canada at the same time reported that there is a gene called ARID1A which is commonly mutated in endometriosis associated cancers. This was an important finding. The findings reported a high percentage of loss of function mutation. That means this is a tumor suppressor gene and at the same time there were lots of publications from Human Genome Atlas showing us that chromatin regulators commonly altered in cancer as well. So it functions in nucleosum and it acts on chromatin...normally chromatin is like this and ARID1A alters the chromosomes and at the site of alteration it acts how? How does it act, why did we select it for endometriosis study? Because in uterine corpus cancers, in eutopic endometrium we saw that endometrioid type endometrial cancers show loss of this protein. Why is it non-endometrium related cancers, serous carcinoma does not have any relation with it?

In the paper that we were able to publish last year we again selected cystic endometrioid cancers again with the same group we were able to show that cystic and adenofibromatous type of ovarian clear cell carcinoma act differently because endometriosis related ovarian cancers act perfectly well, whereas adenofibromatous type does not do so. They are different. They act differently. So we selected those cystic type endometrioid and clear cell ovarian carcinomas. We found overall 60 percent of ARID1A loss in those carcinomas. Loss means in the epithelium we have no expression of the gene. On the other hand is the control in the stroma we have normal expression of the gene. So, gene expression is lost, probably this occurs due to mutation also the sequencing. Interestingly, there was no case where the gene expression is lost in the endometriosis while it was retained in the tumor. These are close endometriosis areas of the tumor where ARID1A protein is totally retained and acts normally there. But only the portion next to the tumor shows loss among clear cell carcinomas, the proportional loss was like 70 percent. And among endometrioid carcinomas the proportional loss was 55 percent. These are some examples from them. This is a clear cell carcinoma which shows loss and the adjacent endometriosis again shows loss. Another tumor, endometrioid tumor, shows loss. We had four cases with endometrioid cancer in their corpus which showed similar loss, clonal loss.

Apparently, ARID1A loss is very important from the transformation of endometriotic cysts to the endometrioid type cancers. We further found in some other endometriosis related cancers that I will not touch upon but if you go back to the ARID1A function we can see that DNA damage, cell cycle progression and other important functions are related. My last slide is on DNA damage. We perfectly well know Fenton reaction which causes oxidative stress and repeated DNA damage, which is probably related to ARID1A gene loss and function.

I would like to thank my groups, especially the Endometriosis Foundation of America but apparently we are at the beginning of the way so I will try to answer your questions. 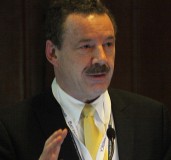 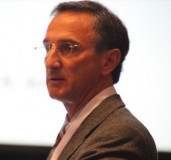