Usually, an eye mask brings comfort. Living in Alaska, the Land of the Midnight Sun, an eye mask is a necessity. But I don’t think I can bring myself to put one on ever again.

Endometriosis is a condition that I have survived. It is a relentless malady that has invaded the last ten years, most of my adult life. My first surgery in 2008 was a prognosis of Stage I endo. Fast forward several years, my second surgery determined it was now Stage IV, where bilateral endometriomas (masses of endo tissue) grew to nearly the size of oranges on each of my ovaries.

In 2018, I decided to see a specialist. I traveled with my family to Atlanta, and at this point, I was undecided whether I should even go through with it, but my gut feeling was that there was something very wrong with my insides. There was a constant bloating regardless of what I ate, regardless of how health conscious I had become. The pain, the spasms that I could not explain away in my mind, got worse.

After a four-hour surgery, my worst fear and resolve became a reality. Endo had grown on my intestines, appendix, ureters, ovaries, and ligaments. The scar tissue had caused my bowels to twist, which required a bowel resection to remove several inches of my small intestine and my cecum. My appendix was removed and my ureters dissected out.

Upon waking, I didn’t know whether to be relieved or sorrowful.

What I didn’t know was that for the next 23 days in that hospital, I would be fighting for my life. 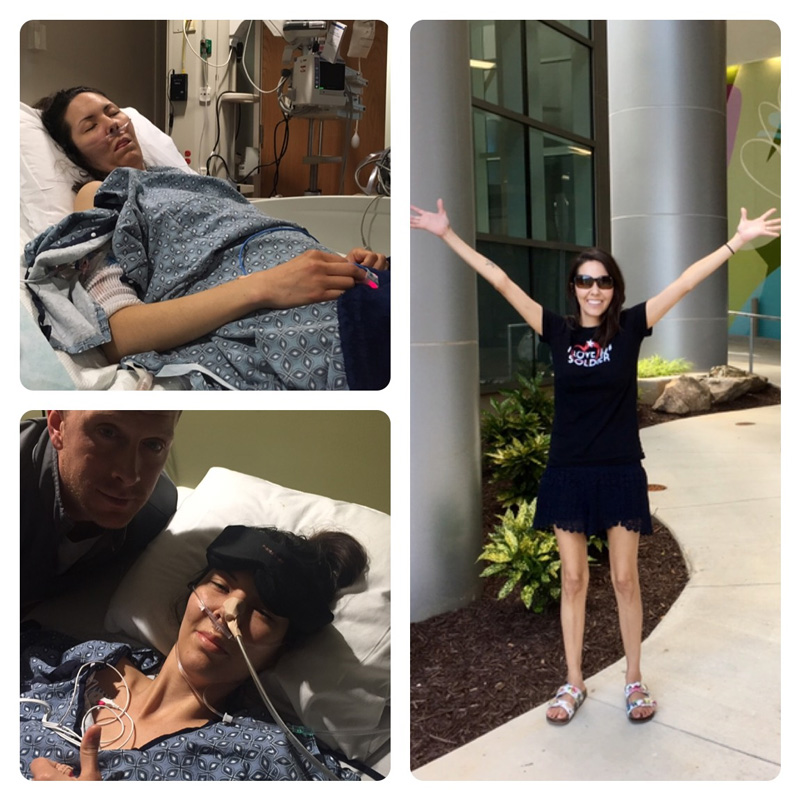 My blood pressure and heart rate rose to very high numbers two days after my surgery. I started to spike a fever. At this point, I don’t remember much about the next few days, but an additional urgent surgery revealed that there was an infection in my gut as a result of the bowel resection. I was immediately transferred to the ICU and woke up with a nasogastric tube in my nose to drain fluid from my gut. An overwhelming feeling of vulnerability came over me. My husband would take the night shifts while my mom was with me during the day.

After a few days in the ICU, I was transferred back upstairs. After several days now without any food, my husband advocated for me to receive liquid nutrition. I was very weak and have always been thin, so this was something that needed to happen. I was put on a Total Parenteral Nutrition, which required a central line. This was a delicate procedure that involved three very sanitary ladies, who draped and prodded for what seemed like hours, inserting a line in my right bicep that would travel to my heart.

At this point, my eye mask was a dear friend. The regular vital checks and doctor visits with the harsh fluorescent light made it very difficult to sleep for any period. Eventually, I gave in and accepted the Ativan that would help me sleep while in such pain and disruption. I became numb to the IV flushes and checks. My arm was marked up from the continuous blood pressure cuff checks.

Strong antibiotics were in full swing, and they were continually changing. I had anxiety with every change and wanted the nurse to administer the IV slowly. If I became reluctant to the antibiotics, I was strongly advised that if the infection were not kept under control, I would become septic and die. The infection had now spread to my right lung, and gelatinous fluid began to build up. My gut infection was in full course, making it difficult to sleep because of constant accidents. Eventually, I had to have a rectal tube placed for the infection to make its way outside of my body while still having the ability to sleep. Vomiting and nausea were common occurrences.

At my lowest point, I was not able to get the breathing incentive spirometer past 500 (the passing number is 2550). Oxygen became a necessity for me and walking was difficult. I was so weak.

After 12 days without any food, I knew it was a good sign that I was starting to become hungry again. I had lost 20 pounds. My first meal was mashed potatoes, and it tasted delicious! I was reluctant to have very much. A few bites and my left shoulder began to throb. The C02 air blown in my gut during surgery made its way to my shoulder, and it became excruciating to eat or drink anything sweet.

Interventions had begun to try to extract the jello from my lung. The first was a large needle that was inserted through my back to extract the fluid. This was hardly a remedy, as the fluid was so pervasive, and this only allowed for very little fluid to be removed. The second intervention was a chest tube placed through my back. The Radiology doctor couldn’t believe that I had refused sleeping drugs during the procedure. I knew that if I had sleeping meds it would make me groggy for the rest of the day, and I was committed to my PT time, even if I only had the energy to walk one lap around the floor.

After the chest tube was placed, it became so difficult to sleep because lying against the bed was painful. My husband had the best idea to stuff a neck pillow on my back to protect the tube area. It was still very painful.

The fluid started making its way out, but it wasn’t very much. And as the days went by, the fluid turned a dark pink color. We were assured that this was normal, but I began to feel light headed. That evening I started feeling horrible lung pain when I breathed in. I started speaking incoherently to my husband, so he knew something was going wrong. My blood pressure was dropping to a daunting 80/50 and continuing to drop while my heart rate rose up to 140. I was losing blood fast and was rushed to the ICU for the second time. Units of blood started going in at the same time, and I slowly began to speak again. The chest tube was misplaced and had fallen out. 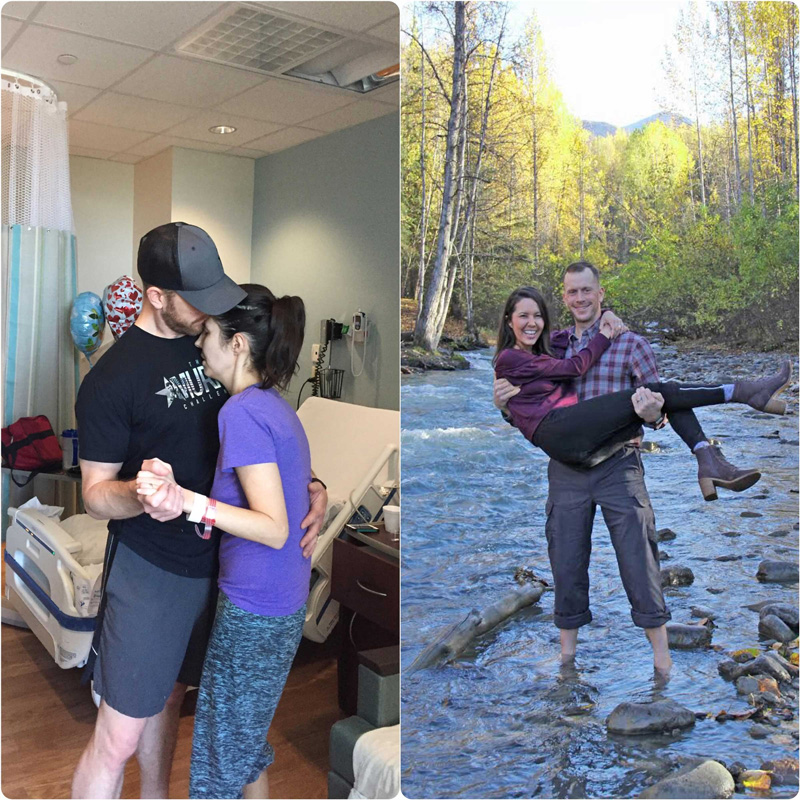 Once I became stable, it was time to place another tube in. This was one of the more horrific experiences in my stay. The thoracic doctor had to push through my rib tissue and muscle on my right side to get the tube where he wanted it. Immediately, it began to suction fluid out of my lung cavity, and the expansion of the lung was harrowing. I screamed in pain, and two nurses had to hold me down. All I remember was one of the nurses saying, “Ativan, give her some Ativan!” Then I fell asleep.

Eventually, I was placed back upstairs, hoping never to set foot in the ICU again, but I started to run fevers more consistently, and my white blood cell count was still high. The fluid was still there. I’ll always remember the physician's assistant who came in to tell me that I needed surgery to remove the fluid from my lung to clear the infection. She was stern and short, but I trusted her.

My mom had her worries but remained so strong up until this point. Another surgery? How long was I going to be here, and would I ever leave? I told her that this had to happen and I would be okay.

During surgery, the fluid was removed, and a new chest tube was put in place to drain out any remaining fluid. The thoracic surgeon felt very good. Over the next few days, I regained some of my strength, but it was going to be a long recovery. After 23 days in the hospital, I was reluctant and vulnerable to leave.

Over the next several weeks, I recovered with the help of my physical therapist. I am stronger now even though I still have rough days. I threw my eye mask away. I threw away my hospital slippers. I’m looking forward to facing life with my eyes and heart open.

If you suspect that something is wrong, don’t second guess yourself as I did. See a specialist the first time and early on. Be your advocate.

Editor's note: Would you like to contribute to our EndoStories section? Click here to learn how to submit your work.

I Was Angry for My Younger Self: Medical Student Kanwal Ojha’s Endo Story

Doctors Told Me Endo Doesn't Cause Bloating (It Does): Morganne Skinner's Endo Story