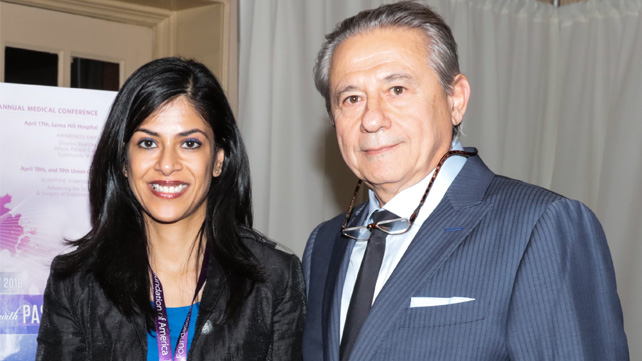 NEW YORK, NY, April 18, 2015 -- The Endometriosis Foundation of America (EFA) began its 7th Annual Medical Conference; "Pursuing Precision with Passion" with a patient awareness day at Lenox Hill Hospital on Sunday. The EFA put out a clarion call to the public and the medical community to recognize the public health aspects of endometriosis.   The day featured disease and public health experts discussing diagnosis and disease impact to treatment considerations and research.

"Endometriosis is a disease with ramifications beyond debilitating pain. Global research shows it costs women some $230 in earnings and 10 hours of productivity each week," said Jhumka Gupta, ScD, epidemiologist and assistant professor at George Mason University Department of Global and Community Health, who spoke to the conference crowd.

“Many think that endometriosis is a disease only associated with painful periods. In truth, endometriosis causes a number of health issues,” said Dr. Tamer Seckin, founder of the EFA with Padma Lakshmi.  “It is the third leading cause of female infertility; and has been associated with a slight increased risk for ovarian cancer and just last month a new study linked it to a greater risk for heart disease, although the relationship is not clear.”

Dr. Gupta, whose research focuses on the public health impacts of violence against women, said, "A recent study shows that in some parts of the world, infertility, which is common among women with endometriosis, can increase women's vulnerability to experiencing violence from her husband." Gupta stated, "Like so many other pressing public health and human rights issues that impact women and girls, endometriosis is shrouded with stigma. The difference is, endometriosis is virtually absent from public health and social justice advocacy.  Endometriosis urgently needs more than awareness, but also action from our leaders. Everyone has the responsibility to ensure that women and girls aren't robbed of a great career, schooling, or social life because of endometriosis."

Seckin said he could not agree more!  An endometriosis surgeon specializing in laparoscopic deep excision of endometriosis, Seckin said, “The disease needs to be destigmatized.  Women still don't talk about their periods openly, perhaps because society does not encourage this necessary conversation about women’s health.”

According to Seckin, a general lack of awareness combined with a ‘normalization’ of symptoms has made widespread advocacy for the disease nearly non-existent, and has caused an almost ten-year delay from when a woman first experiences symptoms until she eventually is diagnosed.  Seckin believes that strides are being made to bring endometriosis out of the shadows, but he says it is not fast enough and there is still a long way to go.

“We need to create a better environment so women can find comfort in talking about their periods and other endometriosis symptoms openly, such as gastrointestinal disruptions and painful sex,” he said.  “This will only bring more awareness to the disease and in turn lead to better public policies to educate the medical community, fund landmark research and provide better diagnosis and treatment options.”

Seckin said the conference was streamed live and that it will be posted to the EFA website.  To learn more about endometriosis and the EFA visit endofound.org.

Tamer Seckin, MD, is an endometriosis specialist and surgeon in private practice in New York at Lenox Hill Hospital.  In 2009, he founded the Endometriosis Foundation of America (EFA), the first advocacy foundation organized by a practicing physician to raise awareness and emphasize the critical value of early diagnosis and excisional treatment of endometriosis. He is the author of “The Doctor Will See You Now; Recognizing and Treating Endometriosis” published March 2016.

Jhumka Gupta, ScD, is a social epidemiologist and Assistant Professor of Global and Community Health at George Mason University. Her research focuses on gender and health disparities, and on the epidemiology of the health impacts of violence against women. She has authored over 50 peer-reviewed publications on these topics. Dr. Gupta is particularly interested in vulnerable populations, such as communities of color and those impacted by humanitarian crises, both inside and outside of the United States

Endometriosis Foundation of America (EFA) was founded by Tamer Seckin, MD and Padma Lakshmi in 2009 and strives to increase disease recognition, provide advocacy, facilitate expert surgical training, and fund landmark endometriosis research. Engaged in a robust campaign to inform both the medical community and the public, the EFA places particular emphasis on the critical importance of early diagnosis and effective intervention, while simultaneously providing education to the next generation of medical professionals and their patients.