University of Cincinnati College of Medicine

Katherine A. Burns, PhD University of Cincinnati College of Medicine

Endometriosis is an inflammatory disease where endometrial tissue is found at sites outside of the uterine cavity, including the peritoneal cavity and ovaries. Although endometriosis is so prevalent, little is known about the mechanisms behind the initiation of endometriosis as a disease. Endometriosis is considered an estrogen-dependent disease (3, 4). Recent research investigated a link between endocrine disrupting chemicals (EDCs) as an environmental participant in reproductive diseases, including endometriosis (5). Xenoestrogens, or synthetic EDCs, include a group of chemicals known as phthalates which weakly mimic estrogen (6, 7). Phthalates are a group of similar phthalic acid esters that are used as plasticizers in polyvinyl chloride plastics. Phthalates are not covalently bound to the plastic matrix; therefore, they easily leach out of the products into the external environment (8). The most commonly used phthalate is di-(2-ethylhexyl)phthalate (DEHP). Humans are exposed to phthalates through multiple routes of exposure including food and drink, inhalation, skin absorption, and even medical procedures (9). Growing literature suggests that phthalates are increased in women with endometriosis (1, 2). Although phthalates are considered xenoestrogens, it is possible that the primary response is not via estrogen-mediated action, but rather through immune-mediated responses, as phthalates affect cytokine secretion from macrophages (10) that are the same cytokines dysregulated in women with endometriosis (11). Preliminary data from the Burns laboratory suggests the initiation of endometriosis is estrogen independent but dependent on the immune system; therefore, we hypothesize phthalates, specifically DEHP, play a role in the early initiation of endometriosis. To determine if this may be a mechanism of action, we will perform multiple experiments examining the effect of phthalates on endometrial cells, the impact of macrophage secretions on endometrial cells after phthalate exposure, and finally the effect of phthalates on the development of endometriosis in a mouse model. Our hypothesis is that DEHP alters the innate immune system to exacerbate the proliferative and invasive properties of endometriosis.

Specific Aims: There are three specific aims delineated in this research: 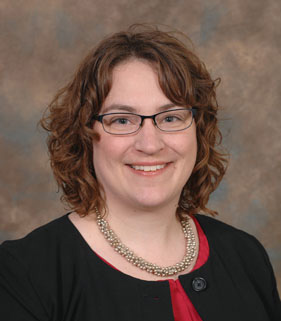 Dr. Katherine (Katie) Burns is an Assistant Professor at the University of Cincinnati College of Medicine in the Department of Environmental Health. She earned her PhD from the Pennsylvania State University in Pathobiology with a concentration in Toxicology. Dr. Burns did her postdoctoral research at the National Institute for Environmental Health Sciences where she used a mouse model of endometriosis that recapitulates retrograde menstruation to study the roles of estrogen receptors in endometriosis. The Burns Laboratory studies how the immune system and interaction with endocrine disrupting chemicals contribute to or exacerbate endometriosis. Dr. Burns is also an endometriosis patient. During her 5th surgery, she was a subject in a clinical trial. At that point, as a PhD student, she saw the clinical and translational aspect of endometriosis and knew her future career direction. Her goal is to contribute to endometriosis research with the hope that girls become healthy reproductively competent women.