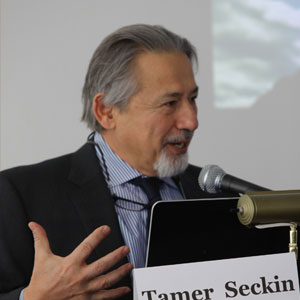 How many of you were at the meeting in the Metropolitan Club yesterday? Okay, quite a few. We will wrap up a couple of things but as we were just taking pictures, I could just say this; I think we are in front of a friendly crowd. You know at the pictures one of us was aware of her breasts. "Let me cover them", she said. Well, I believe in a fertility god. If anything I believe in what a fertility god meant 10,000 years ago for human beings. We went from the Sumerians all the way to the Greeks and modern times. Ten thousand, 12,000 years ago these gods popped out, it was all about breasts, which supplied milk. Then we brought animals to pictures. It was about the goat, it was all about their milk that fed them, fed life.

Today, after Greek times - you know I tried to say this yesterday but my sides were not working - but I am very into archeological tomb artifacts, from my childhood. Where I came from my mother always took me to digs. Female sculptures came out from the tombs - they were always buried with their goddesses, miniature goddesses. The female was always initially fat from 10,000 years ago and for every century or every 100 years, the breasts got smaller as they found other sources of feeding I guess. The waist got thinner, the hips got bigger and we reached the esthetics of it in the Greece of 2500 years ago. Then there were the dark periods and this and that.

But today we understand that it was esthetics then, it was our vision then. Today, with science, the fertility god is buried within stem cells. It is the instinct of nature, it is longing for its continuation. We are just the outside appearance of the inner code. It is determined to live forever. Those are our genes; we are just symbols of them. Our children are not ours, we are not ours and our diseases are basically part of the evolution and I really see endometriosis patients as victims of the evolutionary process. Their childbearing is blocked, they are destined to have some loss of quality of life, and we are fighting the disease at a very, very deep level. I want you to understand that. It is not really what we do in our practices just trying to fix things like a car repairman. We can really work a lot but after a point if you do not understand the elements the car will never be completely "well".

Yesterday's meeting from that angle was very historically important for me. What was important? I knew this, I made the schedule focused areas intentionally, put the most controversial topic first, ovarian cancer and endometriosis. Hmmm, nobody wants to talk about it, it is a very scary topic. But what we know about cell trafficking from endometrium today and its stem cell origin, as far as inflammation, is important in the same manner.

Today we know ovarian cancer - we know at least 20 to 25 percent of it is endometriosis associated elements - and we see it there. The other 75 percent is the part of ovarian cancer that pops up in the post-menopause period. We do not know if that has to do with it but most likely it is. Nobody has asked those women at the age of 65, "How were your periods when you were 12 or 13?" They want to live, they are challenged with cancer, they are going to die. Seventy-five to 80 percent of them are going to die. Nobody asks that particular question.

But, if you look at them, many of them are infertile; many of them have some, already some characteristics we know of being infertile, less children - elements there, family history. This needs to be looked up. I did comb some important minds from Memorial Sloan to look into this. Then we looked at the pathology, obviously same elements were there.

Then we looked at the politics. I personally believe endometriosis patients are, in general, patients with pain. The etiology of their pain being endometriosis they are being advised against, there is prejudice against, at times discrimination against, health care in schools and this will come up later. If you see the ideas they will pop out. In the afternoon we will look at the most controversial robotic versus classical surgery. I personally believe that the robot is the future, it is going to happen. However, today it is like an elephant trying to do surgery in a room. It obstructs my speed basically, it kills my finesse and touch feeling that I can attain by whatever I do. It feels like eating with chopsticks versus, big chopsticks coming from the robotic assistants, I am picking up rice. It is just that way.

We closed the session with research. We talked about role study. It is something that we like to really dig into. It is interesting to see very shortly if something wrong happens somewhere in the body, like inflammation endometriosis. The new cells in the endometrium, which have nothing to do with what is happening outside the uterus as an inflammatory process, the new cells we catch, the stem cells, the most primitive cells, their genetic code has already changed. The signal has changed, electrically, molecularly something has changed. That repair process is already a disease process. The whole body reacts when something wrong happens somewhere. That is why we perceive pain in different manners where these widest diseases have a thousand faces.

I will cut here. I just want, you know, if anybody wants to add something to what I have said, this is my perception of yesterday. I am really excited that we brought very beautiful speakers and the significant history of their life given to the study of endometriosis. I am proud that you are also here. If it was not for the patient's feedback we would never be anywhere. Doctors are, you know, just sitting there waiting for you to say something. If they cannot fix it they should look into why they cannot fix it.

I will stop here and I will have Lone take over because I can talk more and more but this is not my meeting. This is your meeting. I will have no session to speak. This is my last talk. 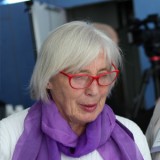