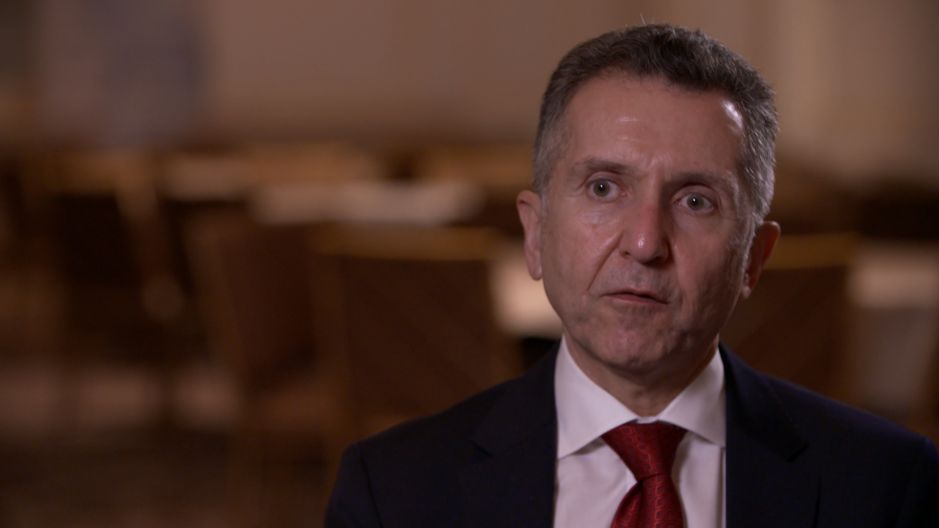 Interviewer: Okay, we're now joined by Dr. Serdar Bulun. Could you please give us a title just so everyone knows how to reference you?

Interviewer: Thank you so much for being here today. In the presentation, you talked about steroids and DNA and reproductive tissues, and how it's a dangerous liaison. Talk a little bit about that, kind of give us a brief overview of that presentation.

Serdar Bulun: Sure, absolutely. I really wanted to cover a very complex area by trying to simplify it a little bit, if you will. It's very important to recognize that steroids are very important for endometriosis. Actually, let me put it this way. Whatever insulin deficiency is for diabetes, you could probably equate estrogen access for endometriosis. So basically, if there's no estrogen, there are no endometriotic symptoms most of the time.

So the way steroids such as estrogen work is that they bind their receptors, and receptor and steroid complex, they go to the DNA, and they regulate how proteins are made in a cell. And the proteins in a cell, they define the cell's function, actually. Estrogen can do many, many good things for us, such as it is good for our bones, it provides all the sexual development of women, and also to some extent it differentiates the brains of both men and women. So it does a lot of good things.

But in endometriosis, it kind of loses its way. And when it binds to its receptor to DNA, it does a lot of bad things. And this is primarily via increasing inflammation. And when this inflammation increases, these bad substances, they stimulate nerve endings, especially in the pelvis and other places, and is perceived as extreme pain. And that's usually what we deal with in case of endometriosis.

Interviewer: If your colleagues could take away just one nugget of your presentation today, what would that be? What would you want them to take away from what you talked about today?

Serdar Bulun: I think I would want them to know that the steroids and DNA and how they interact are extraordinarily important. You do not have to have changes in the DNA code, which are called mutations, to cause these problems. The way DNA is misprogrammed can cause a lot of problems with increasing inflammation, as in the case of endometriosis. And to understand this complexity is very, very important. So there's no way around it, there are three giga bases in one piece of DNA, I don't know how many billions. And all these codes, they play a major role in the cell's function.

And it is so complex that I almost see it as a holistic consequence of estrogen action, like a lot of things, a lot of proteins that are rising from the DNA get together. And if you are missing one or two proteins or if there are a few in excess, a lot of things can go wrong, as in the case of endometriosis.

Interviewer: Today's kind of whole focus was looking at that link between breast cancer, ovarian cancer, and endometriosis. How do you treat a patient, or how do you talk to a patient, who possibly has two or more of these types of diseases?

Serdar Bulun: That's a very good question, and in fact, I try to speak with my patients and understand where they come from, answer their questions, and educate them a little bit based on what I know and what my research found. For example, it's kind of very new for a lot of patients, and in fact clinicians, that repeated episodes of ovulation and menstruation, is really not normal for a woman. I mean, most women's bodies were made, like from an evolutionary perspective, maybe to handle a few of these episodes. But 100 years ago, a lot of women ended up with becoming pregnant at an earlier age and had many births. Most of us, most men and women, died at the age of 40, 45, even 100 years ago.

So we went through as a society, both here and in many places in the world, a tremendous transformation of lifestyles. So it's important that, for example, women should understand if they keep getting exposed to these repeated ovarian hormones, like estrogen and then progesterone, followed by menstruation, cycle after cycle after cycle, that takes a toll on the body. That stimulates the breasts sometimes in the wrong way, increases the risk for breast cancer, it definitely increases the risk for endometriosis. It's not 100%, but it definitely increases the risk tremendously. It does increase the risk in some women for, for example, uterine fibroids. And again, if a woman chooses not to do anything about it, that's fine. But at least I stuck with increasing her awareness, and also let her know that there are strategies to suppress ovulation, for example, by continuous birth control pills or other upcoming drugs, to provide them some options.

And at the end of the day, I participate in helping the patient to make a decision for a long-term choice of A, maybe to decrease the risk of some of these diseases, but most importantly, like if she's suffering from endometriosis and pain, again, I work with her to go through the options of how to stop ovulation and menstruation so that we can minimize pain.

Interviewer: After listening to your colleagues speak today about the various topics, what's something that you will take away and maybe implement going forward in your practice?

Serdar Bulun: I learned a lot today. I think it was very educational for me. For example, there was one colleague of mine, a professor from Johns Hopkins, Dr. Shi. Did I say his name right?

Serdar Bulun: Dr. Shi, he talked about new mutations that he found, and described in some of the epithelial cells in endometriosis. And he also confirmed what we have been working on, that another cell type, the stromal cells, do not have mutations, but the mutations are mostly in the epithelial cells, and these might be the ones that could give rise to ovarian cancer in the future. So I was like really happy to find out that we were in the right path, and also I was very happy to think that I could use some of the data that he presented and incorporated, incorporate that into our research.

Another colleague of mine, Dr. Rob Taylor, talked about the immune aspects of endometriosis that was kind of very complementary and integrating to what we are doing, and I learned a lot from him. And again, by learning these things, you can tweak your research, you can take a new future direction to further your studies.

Interviewer: Well, thank you so much. Those are all the questions I have for you. Do you have anything else you'd like to add about your presentation or anything else from the conference today?

Serdar Bulun: I just want to congratulate Endofound ... did I say it right?

Serdar Bulun: Yeah? I wanted to congratulate Endofound for putting this conference together. This is honest, I never, ever been to a conference in which both physicians and scientists openly discussed these three very important problems of women, namely endometriosis, ovarian cancer, and breast cancer, in such an open forum that is somewhat also open to patient advocates, patient scientists, and physicians. It was, I thought, very helpful, I thought we exchanged a lot of useful ideas, both between the physicians, scientists, and with the patients. And so I walk away with a hugely increase understanding of these diseases.

Interviewer: Well, thank you so much for your time and for being here today.