Frankie Kuhn has helped educate adolescents
about endometriosis at ENPOWR presentations this year.
Learn more about her volunteering experience with the Endofound! 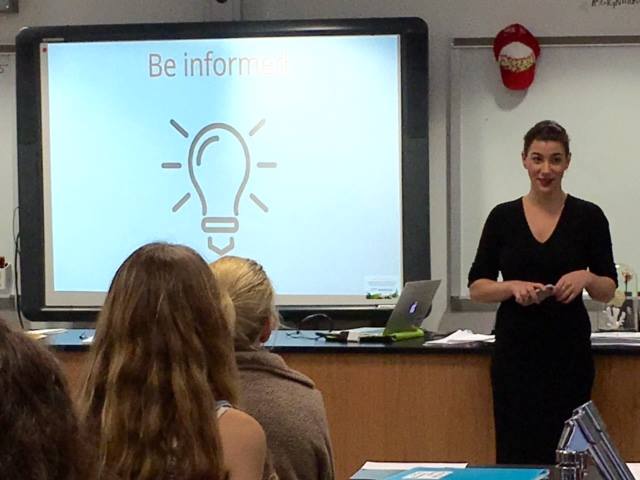 Frankie: I began suffering with debilitating cramps and bladder spasms when I began menstruating at 13.  At first, I misunderstood my symptoms as a reoccurring UTI, combined with general period pain.  It took four years, dozens of opinions, hundreds of exams and countless sick days to finally find a doctor and diagnosis.  I underwent my first laparoscopic surgery at 17. Along with hormonal supplements and bi-annual check-ups, I was able to live a semi-comfortable life until the severity of my symptoms brought me back to the OR.

After my second surgery, treatment became much more aggressive and seemed to work once again. But like many patients of endometriosis, the serenity of post-surgical bliss only lasted so long.  Knowing I would need another surgery, I decided to seek out an endometriosis specialist capable of performing laparoscopic excision surgery. My third surgery took place on April 3,, 2014 and has provided a level of relief I had not experienced after prior procedures.  I currently continue to seek medical guidance and am a happy patient of Dr. Tamer Seckin.

Endofound: How long have you been a volunteer, and what first inspired you to get involved with the endometriosis community?

Frankie: I have been a volunteer with the Endofound for the past year, and was inspired to start after becoming a patient of Dr. Seckin and researching the foundation. It’s great to be a part of an organization that helps educate the public about a disease affecting one in ten women.

Frankie: At the age of seventeen, I was diagnosed with Stage IV endometriosis.  Looking back on all the years that I suffered, I wish there had been an organization to spotlight the disease, such as the Endofound.  I think that if there had been more awareness, I would not have felt so alone.

Endofound: What kinds of activities have you been involved with when supporting the Endofound?

Frankie: Since becoming an active volunteer with the foundation, I have spent most of my time on The ENPOWR project, where I visit local schools and help present my experience with the disease to educate adolescents.  I have also attended multiple Endofound events, such as the Nurses Conference, Paint Nite, Endofound on Today, and am looking forward to attending this year’s Blossom Ball.

Frankie: It is extremely important for others to support the Endofound because they spotlight a disease that plagues one in ten women and has been in the dark for generations. No woman should suffer with debilitating symptoms month after month without an answer and face little understanding and sympathy from the public.

Endofound: Why are Endofound awareness initiatives like The ENPOWR Project important?

Frankie: The ENPOWR Project is extremely important because it educates young adults about the endometriosis and its treatment options.  It also helps pre-teens and teenagers develop a level of empathy and understanding for those who may be suffering with endometriosis.

Frankie: If The ENPOWR Project was presented at my high school, it would have given me the necessary tools and information to understand the disease, my body and my symptoms, so I could articulate my symptoms clearly to the physician.  It would have saved me years of physical and emotional suffering.

Frankie: I have witnessed great responses from students at the presentations, who are eager to ask questions, learn more about the disease and find ways to get involved.  Because of the Endofound, endometriosis is gaining national recognition in the medical community, which will hopefully lead to greater understanding and treatment.

Endofound: What advice would you offer for anyone who might be interested in volunteering for the Endofound?

Frankie: Start volunteering! This is an amazing organization focuses on educating young women suffering with a painful and confusing disease, and allows them to take control of their treatments and their lives. Because of the Endofound’s work, a generation of women can take back their bodies!