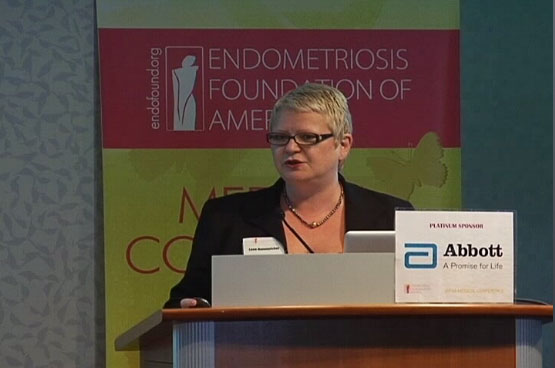 Let’s start. We have a great program divided into four sections; the first section is the science of stem cells, proteomics. We will speak first about who is the “woman with endometriosis is”, with Lone. I would like to invite Lone Hummelshoj from London, the Secretary General of the World Endometriosis Society.

Good morning ladies and gentlemen. Dr. Seckin has asked me very briefly to just talk about who the “woman with endometriosis is”, so we can set the scene for today. A 2008 consortium workshop concluded, or agreed, that we are talking around 10% of women during their reproductive years.

I decided to find out what that actually means.  According to the World Bank, there are 1,761,687,000 women in the world between the ages of 15 and 49. If 10% of them have endometriosis we are indeed talking about 176 million women. It turns out, or equates to, about 7.5 million in the United States and another million in Canada. Tamer is right, we’re talking about 8.5 to 9 million women in North America with endometriosis.

Many of these have never been diagnosed and therefore they haven’t been treated. I just want to hammer home this point; it is one in ten that you see walking in the street. If you are looking around an auditorium like this, there will be a lot of women with endometriosis, and even more so today because this meeting is open to women with endometriosis. I think it is wonderful that we are all coming together to try and commence this dialogue.

So who is this woman? Well, she is somebody who might be in pain and some women are debilitated by that pain. Some cannot have children and some are very, very worried about the long-term effects of this disease.

It can affect their education, their careers, their relationships, and their quality of life. With that, it is not just about that woman, it is about her friends, her family, her partners, and even her colleagues who are affected by this disease. I am going to be talking about this in more detail later this morning. I think some of the things that we need to address here are taboos surrounding endometriosis. Things like we do not talk about, menstruation, it is just not something that you bring up over breakfast or lunch when you have to start explaining what this disease is to those who don’t know it.

So we need to learn to talk about menstruation without sort of climbing in and saying this is an icky topic. In fact, I spoke with a journalist a couple of years ago because I was trying to get him to do a feature on endometriosis for a major English newspaper. He said “we don’t do endometriosis, it’s just too icky”. So that’s what we’re dealing with, and the other thing of course is sex. That’s not something that we should say out loud either, unless it’s perhaps in a gossip magazine and we have to find what the celebrities are doing. But when it affects us, it becomes a tricky topic and I will address that later this morning as well.

So, all of this is resulting in, as Tamer said, delayed diagnosis, delayed treatment and an uncertain prognosis

I am not going to go into further detail here, but I do want to call Laura Baldi-Kuhn up to the platform. Is she here? Laura?

The foundation did an essay contest where women were invited to tell their story with endometriosis; it was called "Take Back the Day". Laura was the winner of this contest and she is going to read her story. Thank you. 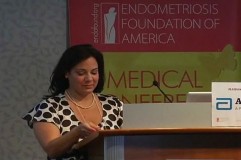 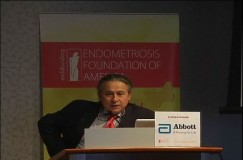