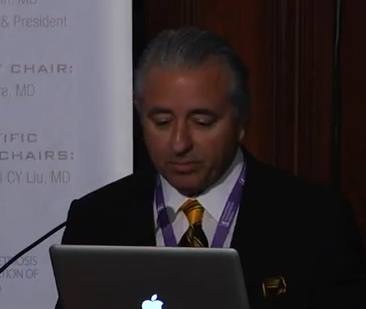 Endometriosis Foundation of America
Medical Conference – 2012
One Laparoscopy – Why Not? Role of Sonography in Early Diagnosis of Endometriosis
Juan Salgado Morales, MD

Thank you very much. Thank you Tamer for the invitation and the organizing committee to let us come from Puerto Rico to let everybody here know what we are doing in terms of endometriosis.

We are going to talk a little bit about the role of sonography in early diagnosis of endometriosis, especially for deep, infiltrating endometriosis. As we know endometriosis is a common disorder for women during her reproductive age. It is a disease that affects one in every ten women and the diagnosis of this condition is often problematic because either the patient goes very late to the gynecologist or the gynecologist does not identify it, or just says, “It is normal, don’t worry, it is normal to have pain during menses”. We are working very hard on that. The currently available laboratory markers are of limited value. You know that CA-125 is only usable when you have more severe conditions than you have in early endometriosis. Usually the correlation between the symptoms and this stage of endometriosis is very poor. I have patients with a lot of endometriosis, stage four; no pain and I have endometriosis, stage one, with a lot of pain. It does not correlate the amount of endometriosis and the findings.

The most frequent presentation as we have discussed before includes menorrhea, pelvic pain, dyspareunia, infertility and pelvic masses. Symptoms may appear very early in adolescents or very late in adulthood. It is very important not to underestimate the symptoms. Listen to the patients when they talk to you, they have pain and it is not normal.

We know the Gold Standard for diagnostic procedure for endometriosis is laparoscopy. But what is really happening is that either the patient is not having only the diagnosis laparoscopy they are not doing the correct surgery, or that we are not preparing the patient prior to the laparoscopy to identify what we are going to find during laparoscopy.

What we are doing to help these patients in Puerto Rico, we do sonography: there is no data for superficial endometriosis with sonography, but for sonography of deep infiltrating endometriosis we have found some data and we are going to show you here. This is the Mauricio Abrao paper that he presented in 2007 comparing clinical examination with transvaginal sonography and MRI for the diagnosis of deep infiltrating endometriosis. For the recto-sigmoid these are the findings comparing transvaginal sonography versus MRI: very good sensitivity. Positive ____ value specificity and accuracy. Also here are the results for recto-cervical and we have very good results as well.

So, when we said one laparoscopy, why not, how can sonography help in the early diagnosis of DIE? We developed what we called the target organ sonography score; it is for deep infiltrating endometriosis, it is a preoperative score system, we do mapping of the lesions and we help the surgeons to find the lesions or refer the patient if they are not comfortable with this type of surgery. We know it is very difficult and we have seen that in the videos that have been shown today.

This is the study we presented in the World Congress of Endometriosis last September. It is the correlation of comparative target organ sonography with emphasis on deep infiltrating lesions and laparoscopy findings; a new non-invasive scoring system for pre-operative endometriosis.

So this is what we did. We evaluated ovarian fixation, we evaluated hydrosalpinx if they are unilateral or bilateral. We evaluated endometriotic nodules and ovarian endometrioma in terms of size and we gave a score for that.

Here is an example of the sonograms. You can see totally fixed or adhered ovaries to the uterus. You can identify very well the ____ lesions of the ovaries. This is another example of the adhering ovaries to the uterus. We can easily identify the hydrosalpinx, adhered to the sigmoid. And this slide is very important to us in terms of what we are going to do with the bowel. We evaluate the bowel in the longitudinal and the in the transverse view and if we have more than 40 percent of the involvement of the circumference of the bowel we go for a segmental resection of the bowel. If it is less than 40 percent we try to shave it or to do a ______ resection. So we know exactly what we are going to have when we go to the surgery. We do not go there to do a diagnostic and start to do surgery. We know exactly what the patient has and how we can help this patient and give her complete treatment.

We take all the results and give it to the group of Dr. Idhaliz Flores in Ponce Medical School. What we did is our sonographies that we took to Brazil to train with Mauricio Abrao. She did the sonograms, we did the laparoscopy and the group of Dr. Idhaliz Flores did the scores of everything – the evaluation of all the results and this is the ROC curve for the transvaginal scoring system with a cut off of four. We have 100 percent specificity.

In the _________ curve we correlated the presentation of the sonogram and the American Fertility Society’s score and have a very, very good correlation with a really good P value.

In conclusion, we understand that sonography could be used to predict the findings of laparoscopy. It will help to have an early diagnosis of deep infiltrating endometriosis in this patient and give her definite treatment. It will also help the gynecologist either to plan the surgery or refer the patient for one, and only one, surgery. This will benefit the most important ones, which is our patients and we can give better treatment to them. 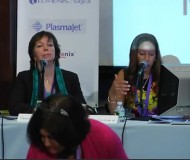 Medical Conference 2012 - Moving on in Your Life After Endometriosis Surgery 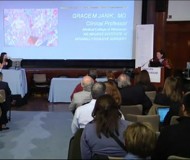