The University of Texas Health Science Center at San Antonio

The lack of complete knowledge of underlying mechanisms that trigger endometriosis is a major reason for the absence of efficacious drugs for this debilitating disease. Specifically, there is a big gap in understanding the molecular communication occurring between different cell compartments during invasion and endometriosis lesion formation, especially regarding the initial heterologous interactions between invading endometrial tissue (composed of stroma and epithelial compartments) and target peritoneal mesothelium cells (PMCs) in the pelvic cavity. Our studies revealed that while gap junction intercellular coupling (GJIC) is suppressed in homotypic cultures of primary endometrial epithelial cells (EECs) derived from endometriosis compared to normal subjects, interaction with PMCs monolayer induced both homotypic and heterotypic coupling of the endometrial cells. As we have shown that these interactions are selectively enhanced in endometriosis by secreted factors from PMCs, we hypothesize that antagonists to these mesothelial cells secreted factors could be novel therapeutic agents for the treatment of endometriosis. Our studies will lead to a much better understanding of the mechanisms underlying this intercellular communication involved in endometriosis lesion establishment, and will likely lead to the design of novel therapeutic strategies that go beyond the symptomatic anti-inflammatory and hormone treatments that dominate currently. 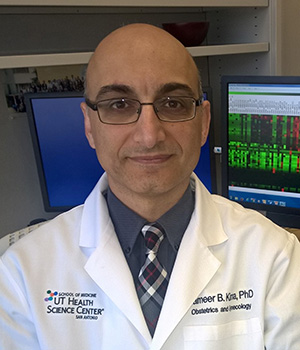 Dr. Nameer Kirma did his postdoctoral research at the department of OB/GYN at Emory University, Atlanta, Georgia. His postdoctoral work focused on the effects of aromatase on breast cancer as well as cytokines regulation in endometriosis lesion development. After that he was recruited to the department of OB/GYN and subsequently the Department of Molecular Medicine at the University of Texas Health Science Center in San Antonio, where he is now an associate professor. Dr. Kirma’s research focuses on gynecological malignancies, including endometrial cancer, and endometriosis. Dr. Kirma has published extensively on the role of cytokines in endometriosis development and epigenetic regulation of endometrial cancer progression. More recently, Dr. Kirma has focused on cell-cell communication in both diseases as it relates to lesion establishment and cellular invasiveness. He is also the director of the institutional Bioanalytics and Single-Cell Core, where he combines innovative single-cell technologies in his research.