Was Freud a Fraud? Certainly not!  However, his untangling of the psychosomatic problems of women with pain was well off the mark.

Sigmund Freud frequently diagnosed patients with hysteria when no other diagnosis could be reached.  Whether this was due to Freud’s ignorance or the standard beliefs of the time, the reality is that many women did not take kindly to that diagnosis.

It is surmised today that hysteria at the time Freud diagnosed it was more closely related to the manner in which a woman reacted to her pain and symptoms rather than to the actual cause of her pain.  Through extensive research and in-depth analysis doctors, today believe that what Freud may have diagnosed as hysteria was really endometriosis.

Doctors Camran Nezhat, Farr Nezhat, and Ceana Nezhat have brilliantly and poignantly chronicled the history of endometriosis in an in-depth article in the Journal of Fertility and Sterility (Copyright 2012 American Society for Reproductive Medicine, Published by Elsevier Inc.) entitled, “Endometriosis:  ancient disease, ancient treatments”.  This comprehensive, enlightening and educational article is for both the medical world and for patients suffering from endometriosis to embrace.  It provides a better understanding of the suspected origins of endometriosis and the manner in which diagnosis and treatment – both medical and surgical – has evolved through history.

Diagnosis of hysteria, witchcraft, and demonic possession was commonplace during the time Freud was diagnosing patients.  Treatment modalities included administration of noxious substances, hanging women upside-down (see below), and enduring painful surgical procedures that included a physician using his fingernail in place of a scalpel long before anesthesia had been discovered.

In Hysteria Beyond Freud by Sander L. Gilman, a diagnosis of hysteria was the catalyst for Queen Anne to swiftly release her physician from his duties, as the Queen was mortified to be accused that her pain and symptoms were imagined or as a result of madness (as cited in Nezhat et al., 2012).

History is a great scholar and can provide a clear understanding of what the future holds if we listen carefully.  The diagnosis and treatments that were set forth by Freud were considered by those of his time to be suitable and acceptable; however, they are now considered barbaric and unfounded.

Unfortunately, as the doctors state in their article, “The clock is definitely ticking as we know that millions of women still live awash in anguish, just as they did thousands of years ago, and just as they will centuries from now unless we can steer ourselves faster toward the long-elusive cure.”

Drs. Nezhat mention in their article the Endometriosis Foundation of America (Endofound) and its founder Dr. Seckinfor their dedicated work in the field of endometriosis awareness and effective treatment. 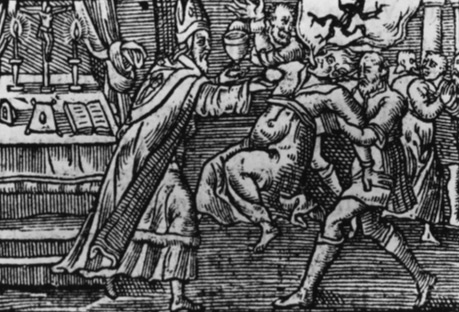 Throughout the Middle Ages many continued to view hysteria or other misunderstood disorders as signs of witchcraft or demonic possession, a charge that would have subjected women to a range of punishments and/or treatments, including executions, exile, or, as is depicted in this etching, exorcisms by a religious leader. (Reproduced courtesy of the U.S. National Library of Medicine. A priest healing a possessed woman, from Histoire prodigieuses et memorable, extraictes de plusieurs fameux aureurs, Grecs, & Latins, artist Pierre Boaistuau, ca. 1566. Paris:
Gabriel Buon, 1598, p. 1272, Record UI No. 101435552.)
Nezhat. Endometriosis in history. Fertil Steril 2012. Reprinted with permission from Drs. Nezhat 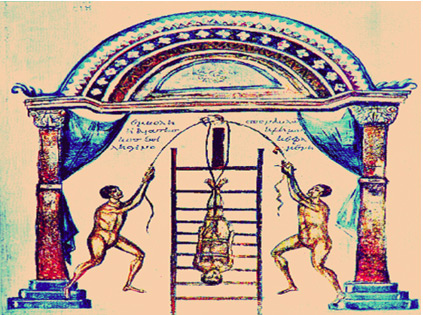 Uterine suffocation, vaginal prolapse, and other gynecologic conditions were sometimes treated with succession, the ancient Greek practice in which patients are bound to a ladder, turned upside down, and shaken vigorously, with the idea being that the uterus would be shaken back into its proper position. (Reproduced courtesy of BioMed Central Ltd and SpringerImages. Scoliosis 2009;4:6. Image from the illustrated comments of Apollonius of Kitium on the Hippocratic treatise On Articulations. Bibliotheca Medica Laurenziana, Florence.)
Nezhat. Endometriosis in history. Fertil Steril 2012.  Reprinted with permission from Drs. Nezhat

What do you think?
In early December 2012, the United States Congress took action to remove language from the U.S. code that has become outdated or demeaning.  By a vote of 398-1, the House of Representatives voted that the word "lunatic" would be stricken from federal law. "The term `lunatic' holds a place in antiquity and should no longer have a prominent place in our U.S. code," said Rep. Bobby Scott, a Democrat from Virginia in support of the legislation. Two years ago Congress took out references in federal law to the term "mental retardation."  Would it then be logical to re-assess other words that hold a negative connotation such as “hysteric(al)”?