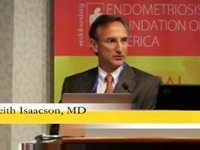 I particularly want to thank Tamer and Heather and the rest of the foundation for this invitation, it is a real pleasure to be here. My mission this morning is mostly to introduce you to the collaborative work that we are doing at the Center for Gynepathology Research at M.I.T. and give you a little bit of background on it before I introduce Dr. Linda Griffith who will give you the details on the work that we are doing.

But, a little bit of the background. Back in 1987 when I was a Fellow I had done some work on endometriosis, and specifically looked at secretory proteins from epithelial cells from endometriosis. My focus at that time was looking at complement 3. My thesis for my fellowship was that complement 3 was actually secreted by epithelial cells of endometriotic lesions and therefore complement 3 is a chemotactic factor, it produced fibrous tissue and it really was the one factor that could explain all the pathology of endometriosis. Well, from 1987 till more recently it seemed like endometriosis research was kind of stuck in that same naivety that I had, which is we find one protein that is important to us, we study it and it seems to explain all the problems that we see in endometriosis. We know now that that is clearly not the case, that it is much, much more complex.

I was fortunate through working at an organization called Cimit over at MGH to be introduced to Linda. Linda is a professor, mechanical engineering at M.I.T. and really is world famous in much of her work but a lot of it was in tissue engineering. I approached Linda and I said, “Linda you can grow liver in the lab, you can grow ears, you can grow any tissue and organs that you want to grow”. I said, “Can you come up with a model, a three-dimensional model, a scaffold model in which we can actually have a better system for really studying endometriosis”. And not an animal model since most animals other than the baboon do not have spontaneous menstruation and we can actually control the environment and put human epithelial cells and endometrium next to peritoneal cells and really study this whole process. At that point Linda had introduced me to this concept of systems biology in which she has been involved in for many, many years in which you really do study the entire system and not just an isolated protein or isolated gene that seems to be important to you or your lab. Beginning in November 2009 we launched this Center for Gynepathology Research. For me this has been tremendously exciting. I am a clinician, I do not pretend to be a basic scientist, I do a lot of surgery and I needed to have someone like Linda and those PhDs that surround Linda to really help me. I think we have a lot of collaborative interaction in which I present the clinical problems, the clinical scenarios and they are able to take that information and develop the systems for studying the problem. That is what we want to show you this morning.

A good way that Linda has described this to me, and this is actually her slide, is that if you take a radio and try to look at all the transistors of the radio and you just knock out one transistor – so if we take endometriosis and we have all the cytokines and monokines and genes and we say, “Well, let’s just knock out one of those genes” it really does not tell you how the entire system works. It does not tell you how a radio works if you just remove one transistor, nor does it tell you what is going on with endometriosis if you say, “Well, the problem is just in progesterone resistance, or the problem is just in MMPs” or whatever, like I said, your particular area of interest is. It is an entire system.

The way we look at this now is that if you take endometriosis and try to study it from the onset that you have cues that affect the cells themselves. You have signaling between the cells, between tissues and signals from these cues, and then you ultimately have a response of the cells as to how they behave and what leads to the problems that you saw this morning. What leads to implantation problems, what leads to the progesterone resistance? How do we get there? That is what we are trying to study at the CGR. So, within the peritoneal environment you have all these cues which are activated macrophages and cytokines and monokines and hormones that are within the serum. These are providing the signals to the endometriotic cells which we know have to be the endometrial stromal cells, the epithelial cells as well as the hemosiderin lighting macrophages that comprise an endometriotic lesion. So how do we understand the signaling there amongst all those cues? Then ultimately you have how do the cells respond, which gives us the ultimate outcome of endometriosis which is infertility and pain and bowel issues, and everything else. We are trying to take it as an entire system, and create models so we can study the entire system.

That is what we are going to go through a little bit this morning, just some samples of how we are doing this within the CGR. So we are looking at the various cues. If you take the peritoneal fluid, and we do this from our own patients with endometriosis, as well as studying all the cytokines and monokines that have been described within the literature and then apply a mathematical model to it and try to understand which ones seem to be the most important for patients with endometriosis. We had signaling experiments in which we were looking at kinase activity that is yielding reflecting inflammation and implantation in the metastasis that was talked about again this morning and then ultimately looking at the tissue responses to all these signalings. So we are looking at colony forming assays and cellular migration and then trying to understand if you put all these cues, signals and responses together how do we end up with the endometriosis that the patient has, and ultimately the clinical significance of the disease that is going on; how does she end up with pain, how does she end up with infertility, by putting the whole system together and studying the individual components.

With that I am going to let Dr. Griffith take over and give you more detail. 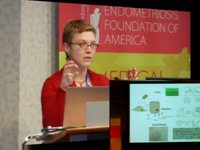 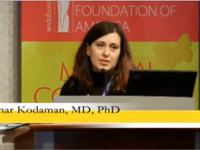