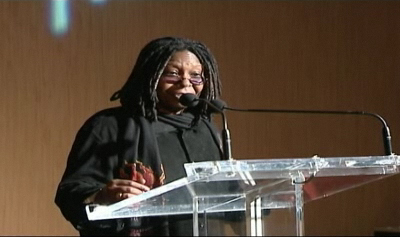 Whoopi Goldberg:  Listen here is the thing I came in today.  I had endometriosis 30 years ago maybe.  I was very, very lucky.  I had an intelligent doctor who sort of knew what was going on and said well, here take this stuff and he cleared it up.  I was very lucky.

When Padma called me the other day as she wants to do on occasions, because sometimes she just wants some company at the basketball game.  She knows I like to go.  She said listen I am doing this thing and she went on to tell me her story which if you do not know her story, I am going to let her tell you, but it totally freaked me out.  Because for some reason, I thought we all knew about endometriosis.  I thought we all knew that it was there and existed, why it happens, some people think it is sexually transmitted, some people that it is because you have let other things go, you got a yeast infection and oh, you let it go.

It never occurred to me that somehow women did know about it.  It just never occurred to me.  Yes I am wearing sneakers too.  You are in a suit, I am comfortable.  So when she explained to me that this was the first event really of its kind, it floored me.  So I called my daughter who is in her 30s now and I said “do you know what endometriosis is?”  She said, “what?  Have to pack the pack the busters.”

I said “no man, you have never heard of it?”  No she said.  I do not know what it is, and it occurred to me that my 30-year-old daughter who I told about endometriosis and it didn’t stick.  If she didn’t know, and she is one of the hippest people I know, and her daughter doesn’t know, she has 19-year-old and she is a 13-year-old.  The boy, we don’t care much about if he knows about it so much.  There is other stuff for him to learn.  Like how to roll a condom, things like that.

You know, and it occurred to me that if they didn’t know that there were hundreds of thousands girls out there that don’t know.  It is not because their mothers don’t want to tell them, because it’s not religion, it’s pure ignorance.  We don’t know, we don’t have the information, we have it now, and so now is why this very first gathering is happening.  Now is why we’re all sitting here looking really fabulous as you are right there, one little two chairs, okay.

Delicious if I was going to jump the other side, it would be you.  Actually first it would be Padma, then it would be you.  I guess what I really wanted to say is, you know there’s a lot of press around and so I’m going to say this loud enough for the press to hear it.  For all the questions that you asked all the people that you saw, make sure you write in your articles that this is something that needs to be discussed.  There is nothing dirty about it.  No religious group is going to be pissed if you discuss this.  Because if you don’t discuss it, many more women are going to find themselves unable to have children, or find themselves close to dying because it’s led to something else.  It’s going to be very, very rough.  So this 100 people, 200 people in this room?

It’s so much not rocked science that I’m going to make Padma come on to the view and talk about it.  Because if we can wake the women up who are listening and the men we can wake the folks up we stand a good chance of maybe getting in front of this thing and not lingering so far behind it.  The reason she has allowed me to do this is because I am so tired, my eyeballs have made their own bed.  So I am going home.  I thank you all for coming here tonight and Padma I thank you for clicking the light on for me and I’m going to click it on for as many people as I can and I hope you enjoy your food, that’s why I wasn’t so graphic, good night. 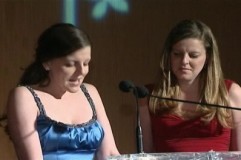 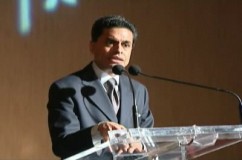