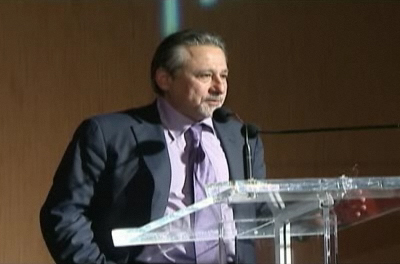 Now we are going to hear from the man himself.  Sometimes, I think it’s worth asking how we ended up here and the reason we have ended up here is because one doctor decided that this was something that had to be dealt with and has to be dealt with using all his powers and all his training but beyond that to use his ability to organize people, to motivate people, to bring us all together and it is of course an unlikely story if you would think this will be somebody with deep roots in the New York Community going back hundreds of years or something like that but no the guy is an immigrant, fresh off the boat, right.  So that is I think a wonderful testament to the glory of New York and America and the diversity and so it makes me think of a story.  The conservative commentator and editor William F. Buckley, Jr. was a great Catholic conservative who was speaking at the funeral of his great friend Richard Clurman and he said, I realized after the many years with him, with my friend Dick Clurman that my whole life I had been looking for the perfect Catholic and when I found him it turned out he was a non-observant Jew.  I think our whole life we have been searching for the great, distinguished New York doctor and he ends up being a Turkish immigrant, Dr. Seckin.

Boy, what an honor.  Well, I am not going to speak too long because everything has been told.  But I assure you this is not about me.  This is about 10 million women in America where my home is now and I care about them dearly.  For two decades, I have been treating endometriosis.  With my background probably has helped because I have seen injustice with women from where I come everywhere else and I have seen injustice to women here in different formats.  I am not going to anything specific because we don’t have time and I am not going to give too much speech here but the bottom line is after two decades of dealing with endometriosis I decided there was some injustice to women.  These women were being diagnosed very late.  There were all infertile.  There were in agonizing pain.  Nobody paid attention to them.  They gave them hormones, pain medications, most of them ended up in hit and miss surgeries and seriously some of them ended up with hysterectomies.  This wasn’t right.  It’s still not right and it’s still happening.  That is how this foundation came about.  So again, I have to tell you, this foundation came about but I came to know what I do, I learnt this art from some people.  Let me recognize them, serious, this is a serious talk.  Some are far away who are not here.  There are three really good people I have dealt with one of them I have felt very close but the other names have to be mentioned who we started with David , _ and John.  But one of them has been so special to me, he is my mentor, good friend, has been the most celebrated gynecologic surgeon in the world, he has done so much for this disease and tonight I want to honor him.  I want to give him a placade that he doesn’t know this.  He is looking at me, total surprised.  I want to invite Dr. Harry Reich to the podium.  Harry, please come here.

I will say a few words because endometriosis as in this phase, well sometimes it can be.  I have seen that but I can’t believe what Tamer has done for with so many people, I would said, look we’ll come here and we’ll be here probably a short period of time and I can’t believe so many people supporting this endometriosis foundation which I believe is a long time in happening because endometriosis as many of you, I have heard some of you already speak tonight and endometriosis I believe is a curable condition but most of you go to a gynecologist and say well it keeps coming back every month and all that and they say it’s a recurrent disease but it isn’t.  You know what they say is recurrent is really persistent, it means the gynecologist in most cases didn’t do a good job the first time or possibly the second time in excising it.  I am just going to say two more words here, but unfortunately the disease happens to lie between the back of the vagina and cervix in the front of the rectum.  So in many cases the gynecologist is not going to go there, so we need to realize that it’s a difficult area.

It’s okay to say that.  Okay, I’m sorry.  But really it’s a disease that in most cases, many of us could, at least if we do a good exam we could tell where the patient hurts, we could excise that area and in most cases that will solve the problem.  When I was at Columbia Presbyterian, I started the department of Advanced Laparoscopic Surgeries in 1995 but there is almost no interest except for my friend Tamer.  I mean he kept pushing and finally I left Columbia, we did some work together in the early 2000s but to me it’s totally unexpected.  It’s a great honor.  I don’t know many people here in the room but again Tamer thank you and I hope this work continues.

Like before any great cause needs some energy and the wind behind the wings.  Forty years ago when Betty Ford came out public with her breast cancer, it was unbelievable.  People, it was a taboo to talk of because of the breast, there was cancer but she came out since then breast cancer became normal to a lot.  Everybody does self exams, so many lives have been saved and tonight I feel like and I feel the energy I will introduce you to a special person whose surgery as you know I have performed but probably one of the most complicated and difficult cases I have ever done but more importantly I congratulate this person for her social responsibility, for her endurance to pain, and I will let her tell her story.  She is the testimony of this disease.  I think she is our First Lady, Padma Lakshmi, please. 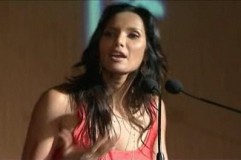 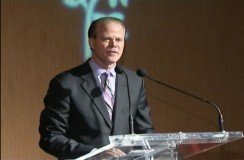