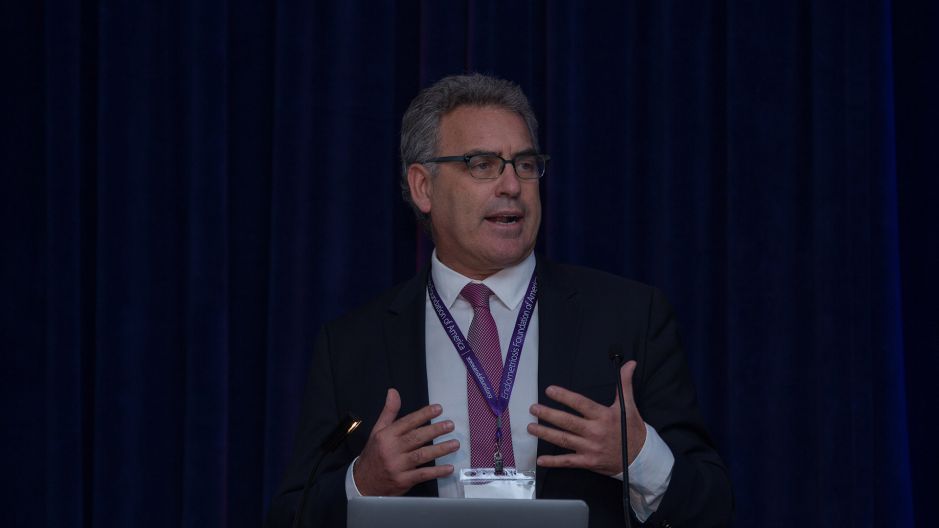 Good afternoon everyone, I promise ... I went into OBGYN because I could sit down for most of the surgeries and they were fairly quick. .. in practicing minimally invasive surgery, what we find is that truly, is that I would say at least a third of my patients have breast cancer or have had breast cancer in the past and certainly obviously our endometriosis patients and such, so certainly the connection is pretty obvious.

Want to just give me a hint? Okay. Bilateral salpingo-oophorectomy, and as Dr.Vallela mentioned earlier today even ... and it was great to hear that even the gyn/oncologist is certainly challenged as well when you have that endometriosis case. Bilateral salpingo-oophorectomy, even for prophylactic reasons or risk-reducing procedure, it's always a challenge.

One of our indications ... definitive treatment for endometriosis, obviously there are those patients who, after repeated surgeries, they've tried multiple treatments and it's time for them to move forward and go the next way. Sorry. Okay.

Risk-reducing surgery. BRCA, Lynch, et cetera, a strong family history of ovarian cancer certainly is not an uncommon reason for us to do our prophylactic BSO. And then there's also the patients with breast cancer who were referred by the medical oncologist typically for their therapeutic surgical removal along with their adjuvant treatment for breast cancer. And then finally, obviously there's always the management of the adnexal mass, specifically in a postmenopausal patient.

What about risk-reducing surgery? It's recommended between the ages of 35 and 40. Patients with BRCA1 it's felt that their ovarian cancer can develop earlier, at an earlier age, so it's recommended to certainly push the envelope and go a little bit earlier. Breast cancer is 57% in BRCA1 patients. In BRCA2 patients, 49% develop breast cancer. Ovarian cancer, it's 45 and 25%. So definitely slightly lower in a BRACA2 patient. Then BSO reduces ovarian cancer risk by 80% in BRCA1 and 2, and it also reduces the risk of breast cancer, and that's always something that I always share with patients who are referred, who are considering what is the approach they want to take.

This is obviously true, though, in patients who are going to have their BSO at a younger age. The patient who is 40 years old is going to have a benefit of also reducing the risk of breast cancer. And this is a great little ... the SGO has some great recommendations, papers on what the recurrent recommendations are.

When we talk about risk-reducing surgery, though, certainly we also have to talk about briefly, just to touch on some of the other therapies. I actually just had a patient who ... this was this past week ... who was a 46-year-old. Had breast cancer, had her bilateral mastectomy already and her DIEP flap reconstruction. Then finally came in for her risk-reducing surgery. However, no desire at all to do bilateral salpingo-oophorectomy. Just was not interested in going into menopause at 46.

That's what we face today. You have the BRCA prevalence and certainly both in the general population, as well as in that increased risk group. As I'm sure all of you practitioners have seen, we see BRCA in patients every so often who you just don't ... clearly not ... Ashkenazic Jewish. They're Irish, they're all types. BRCA is something that we have to think about always and then certainly we can't forget about obviously the other genetic conditions which predispose to both breast, ovarian and uterine cancer.

What about the BSO procedure? And again, specifically in the endometriosis patient. You always have to ... and this is really the point of the discussion ... is that it's just the procedure in a patient with a history of endometriosis is never easy. And especially if we're going in for a risk-reducing ... we're doing a prophylactic risk-reducing BSO or a therapeutic BSO, we need to get out all that ovarian tissue. Obviously you know that when you're dealing just with endometriosis, itself, that there is an incidence of retained ovaries. You do an oophorectomy, and yet there's still a small section of ovary and there's a recurrence of the endometrioma there.

Specifically in this patient who we are doing a risk-reducing surgery, it's incredibly important that we do sort of more an en bloc dissection and removal. You have to be prepared with how you approach those patients. Again, you need to be comfortable with the retroperitoneal approach. That's clear. There are obviously occasions just doing a ... obviously just a prophylactic BSO for risk-reducing BSO in a patient without prior surgical history, no endometriosis, can be a very relatively simple procedure. Often we do them combined at the time of their plastic surgical procedure, whether it's at the time of the DIEP flap, whether it's at the time of their exchange for their expanders for implants. In a patient with endometriosis, it's not simple.

And how you approach that is all comfort, whether it's laparoscopic, robotic. Obviously the number of open procedures is decreased substantially. However, I still will do open procedures for BSOs on patients who are having ... whether at the time of a DIEP flap or sometimes at the time of a really an abdominoplasty. But generally speaking, most are done laparoscopic or robotic.

Then you have to consider, based on your own comfort level and what their surgical history was, potentially using U-caths, again because you really need to ensure that you're getting all that ovarian tissue out. You also have to be prepared for possible need of a GI tract surgeon. If you look at the bottom right there, both these cases, these pictures, if we're doing a risk-reducing BSO on these patients, these are major ... this is not a simple procedure, and Dr. [Session 00:09:51] would love to take care of these cases.

Just to get comfortable again with the retroperitoneal anatomy, and just again, you just really always have to keep reviewing this, no matter how often you do it. Honestly, the location of the ureter, the location of the major vessels, because you know that in a patient with endometriosis, that's all going to be distorted. Your ureter's never where you think it's going to be. And so you always have to be prepared to really be comfortable in those spaces and I'm just going to give you just a really brief ... some advice.

You have to know where your iliacs are, where the superior vesical artery is, your ureters typical on the medial flap when you open up. And again, that's in cases where the anatomy is fairly untouched. But again, the endometriosis patient has often had multiple procedures, as well. It always makes it that much more difficult. That's where occasionally to use catheters.

This is really the important take home message, is the avascular spaces, because they're your friends. We have the perirectal space, the perivesical space, rectovaginal space. These are the avascular spaces of the pelvis, and again you should review ... we all learned about these in residency, but you have to go back and honestly we use these all the time on the difficult dissections, and specifically when we're trying to do more of an en bloc dissection, remove all the adherent ovarian tissue, you really need to be comfortable and remember those. And this is just another couple looks of that. There's a lot of great things you can find online to review, and again, I use this all the time, regardless of what the procedures are, but certainly for the difficult hysterectomy, post-cesarean section, when you have an adherent bladder. So it comes into play very often, and there are just more other looks of the same thing. Very, very important.

I just wanted to show you real quick. Hopefully I can do this without causing a problem here. This is something I'm just going to borrow from one of my colleagues, Dr. Goldman, and my fellow, Dr. Rodriguez, who started using ICG. Just injecting retrograde into the ureters. And these are on robotic cases. Then you'll see just briefly how lovely you see the ureter that shows up when use Firefly on a robot. This was a trachelectomy case, but you'll see the Firefly's turned on and there's the ureter very clearly seen. And it's a nice little technique. There's no stents in place and it works very nicely.

And then just as a last, just brief little dissection. This is a single incision. Now this was an oophorectomy. The patient had nice adhesions of the ovary, but even doing single incision, using articulating instruments, doing the retroperitoneal dissection is not that difficult. You just have to be comfortable doing it. And very key to finding the ureter when you have adhesions, and like I said, the patient who has prior surgeries, the patient with endometriosis, you're always going to ... you have to be prepared to do this. To open the retroperitoneal space and find your ureter and sort of en bloc take all that tissue with the adherent ovary. 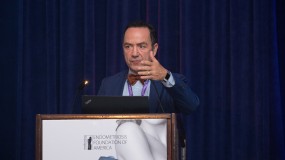 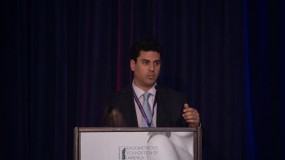