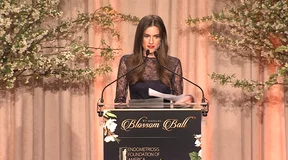 I wanted to open with a brief letter to endometriosis if you do not mind. I thought it would be cathartic.

Dear endometriosis, screw you. Screw you for making my friend, Lena Dunham feel pain, worry and weakness. Screw you for inflicting pain on this brilliant writer, advocate, producer, actress, editor, activist, director, daughter, sister, friend and girlfriend. Her revenge will be living her life like you never existed and we will do everything in our power to make sure that happens. We’re going to delete you from her address book. We’re going to tell her we never liked you in the first place. We’re going to say we ran into you and you looked weird and awful. The women in this room and everyone else in Lena’s life are going to make you miserable until you slink away and cease to cause her pain. She is too good for you as are all of the women here, so leave them alone, okay? Love ya, Allison.

I debated about whether or not to read that letter because one of the many things Lena Dunham has taught me over the years is self-love and I wondered if loving oneself includes even the parts of you that cause you so much pain. The confused cells in your body who are suffering from identify crises, this disorder that threatens to derail her on a monthly basis. But since I am not Lena I can perhaps be forgiven for not being as enlightened as a person because almost nobody is as enlightened as Lena is.

We are talking about a woman who runs our show Girls and many other projects as well without batting an eyelash. She authored a New York Time’s best seller, no big deal, and she launched a trailblazing newsletter “Lenny Letter”. If you are not subscribed to it you absolutely should be. She does all these things and many more while maintaining a sunny, compassionate and professional brilliance.

Lena’s general goodness is one of the foundations of our Girls’ family. Not as well-known, however, is the fact that she has been quietly coping with brutal pain that went unexplained for a very long time. And for someone who seems to know everything, and she does, Lena must have felt so confused and scared to not know what was wrong. And something was definitely wrong. After season one Lena found out that she had endometriosis. She shared the news of her diagnosis with me, which was my introduction to the disorder. I had this strange reaction, bear with me here, of almost empathizing with the endometrial tissue that was stubbornly refusing to leave her body. I could relate to the desire to take up residence as close to her as possible because as anyone who has come into contact with Lena will tell you, we never want to leave the glow of her presence. Just ask those of us who are glad to be working with her for six years. If we could attach ourselves to her less painfully and destructively we absolutely would. Yeah, she is the best, it is crazy.

After telling me about her diagnosis she told me not to worry, Jenny has it – Jenny Conner, her partner in crime and our executive producer, director and writer Goddess. How bad could it be if Lena’s platonic soulmate had it too? It then occurred to me, right then and there, that endometriosis had just met its match because whether you are endometrial tissue or a misogynist reporter, you do not fuck with Lena and Jenny. Sorry for saying the f-word there, a lot of people in here – I am now embarrassed, but that is okay.

The most remarkable thing and something to which many of you will relate is that these past few years while Lena was struggling with endometriosis the rest of her life did not just stop being complicated and difficult. Conflict waits for no one; it spares none of the women in here who are also coping with it. Like so many of you Lena has braved many different ordeals all the while experiencing a kind of pain that so many women, most women, cannot even imagine, and worse, the crisis in Lena’s life almost always came as a punishment for standing up and advocating for others. For years Lena worked through her pain and only occasionally would she have to stay home in bed and miss work, and only occasionally would you catch her grimacing or massaging her stomach. Anyone who worked with or knew her was on her team, allies in her fight. She continued for years to work at the same level that she had then. When she announced that she was going to take it easy this spring to focus on allowing her body to recover I knew that Lena had achieved yet another level of enlightenment. The woman who never stopped finally gave herself her version of a break, which is still 75 percent more productive than anyone else I know. In order to move on with her private life and career she had to focus on ridding herself of the stubborn and painful passengers who had lodged themselves in her body but she is back with even more vigor and a new sense of protectiveness for herself.

I know that some of the new-found fierceness comes from this community of women right here, Padma and the rest, and doctors, it is not all women; you guys are pretty amazing. She would be the first to point out that she is fortunate to have had the options she has had for treating endometriosis and she will continue to bring awareness until all women who struggle with it have the same options that she does. The women in this room should feel very fortunate to have Lena in their ranks. I can personally attest to the power with which she combats her foes. And when that foe is threatening to distract the power of a woman, oh hell no, she is not going to let that happen.

People call Lena brave a lot. Sorry, I know this is long I just have a lot to say. People call Lena brave a lot and she is in fact very brave. But they call her brave for the wrong reasons because they are projecting their own fears onto her and they are assuming she shares them. Lena is not afraid to show you her body. She is not afraid to tell you that Hilary should be president. She is not afraid to tell you that women should have the option to determine what they do with their own bodies. A lot of these things scare me as evidenced by the fact that I am currently as naked as I am comfortable being in front of you just to honor Lena. I am pretty sure if she wore this she would lose the bra entirely. But, so no, Lena is not afraid of those things. In fact, I have only seen a flicker of fear on her face a few times and it is when she, like so many of you, has been made to feel afraid of what endometriosis can mean for her life. Confronting it daily and vigilantly is a stunning display of bravery and I am in awe of all of you who confront it with that same fear. She is brave I agree. She is formidable, even in the face of something she fears.

I actually want to close by giving my condolences to anyone out there who has ever tried to hurt Lena. It turns out that like Achilles before her only a part of Lena’s own body can wound her and even then she will win. The sooner everybody learns that the better. So ladies and gentlemen, the second recipient of this year’s Blossom award, Lena Dunham.