The Endometriosis Foundation of America (EndoFound.org) #LetsTalkPeriod campaign encouraged New York State elected officials to pass endometriosis legislation directing the commissioner of health to develop informational materials concerning menstrual disorders, including endometriosis, for distribution in schools and to patients. Given the seriousness of endometriosis, and the stigma often associated with discussing menstrual health, it is critical to educate both young women and men on this crucial issue. Support EndoFound as we look to get similar legislation passed in ALL states.

How you can make it happen:

1. Find your elected official here
2. Email, message or call them directly and say:

Hello, my name is _______________________, I am a constituent from (City) (Zip Code), and I am in support of the Endometriosis Foundation of America's #LetsTalkPeriod campaign requiring the Commissioners of Health and Education to develop age-appropriate educational materials for endometriosis, and other menstrual disorders, to be made available to school districts and health care practitioners across (State). It is time for us to join New York State, the first state to pass legislation to require materials to teach young women about menstrual health, including endometriosis, a disease that affects one in ten women, be available in schools and to medical practitioners. Access to Women's health is not a privilege; it is a human right! Act today to introduce similar legislation here in (state).
Thank you.
3. Sign the #LetsTalkPeriod petition
4. Share this information and encourage your friends and family to email, message, call, and sign today!

Tamer Seckin, MD, Co-Founder of the Endometriosis Foundation of America (EndoFound), "I applaud New York State for being the first to pass legislation vital to educating young women about endometriosis at the age of disease onset - with the first period. Bringing endometriosis education to New York State's students is a critical step in reducing a delay in diagnosis and overcoming stigmas associated with menstruation. No longer should talk about a woman's period be taboo. Young women, in particular, need to know that painful periods are not normal and that there is help. Everyone deserves the opportunity to thrive; those living with endometriosis are no exception."

Padma Lakshmi, Co-Founder of the Endometriosis Foundation of America (EndoFound),"Educational resources that will be provided with this funding are integral to ensuring a healthy future for our children. All teenage girls and boys should learn about periods and the symptoms of endometriosis since 10 percent of females suffer from it. If I had known in high school, I could have saved myself so much pain and isolation."

Dr. Piraye Yurttas Beim, Founder, and CEO of next-generation women's health company Celmatix and Board Member of the EndoFound, "Based on current trends, every five seconds a baby girl is born who will grow up to develop endometriosis.  As a patient myself, I know the consequences of learning too late in life that the symptoms of endometriosis are not a normal part of being a woman. There is a pressing need to get more information and resources about this devastating condition into the hands of women earlier in their lives. I am delighted that New York is setting an example for others to follow. I applaud Senators Serino and Martinez, and Assemblymember Rosenthal for taking on this important cause, and hope very much that the rest of the country will take notice."

Diana Falzone, TV personality and women's health advocate, "The passing of this bill is a significant step forward for bettering women's reproductive health awareness. Every woman, every person is entitled to living their healthiest, happiest, most productive life. By giving students the educational tools to recognize symptoms of menstrual health disorders like endometriosis, we are empowering them with knowledge about their bodies, therefore helping them get the proper diagnosis and treatment. May New York be the first state but not the last to pass a bill of this kind."

New York State Senator Monica Martinez, "In the United States, it is estimated that approximately one out of every 10 women suffer from endometriosis. While this is not an uncommon condition, many people are completely unaware of the disease, and the lack of awareness often results in a patient's prolonged suffering and misdiagnosis. The symptoms of this condition can cause serious pain that often disrupts a woman's social, mental, and professional life. This legislation will help promote conversations regarding these issues and ensure that young women have the education they need in order to take proactive steps to positive menstrual health. I want to thank Senator Serino and Assemblymember Rosenthal for their advocacy and dedication for bringing attention to this critical health concern."

New York State Senator Sue Serino, "Since introducing this legislation, I have heard from countless women who spent years suffering in silence while unknowingly dealing with the devastating side effects of endometriosis and other menstrual disorders month after month.   By providing young women with critically important resources that will empower them to seek help sooner, this bill has the potential to help reverse the statistics that make endometriosis the leading cause of infertility among women. I thank Senator Martinez and Assemblymember Rosenthal for joining us in this fight, and I encourage the governor to sign this important legislation into law as soon as possible."

New York State Assemblymember Linda B. Rosenthal, "As a result of the stigma that continues to shroud periods, millions of menstruators needlessly suffer in silence for years with undiagnosed menstrual disorders. Information is power, and this legislation will help empower young menstruators to understand their bodies and demand treatment. It will also help to smash the stigma by fostering discussion in the classroom. We cannot break down barriers if we do not talk about menstruation and menstrual disorders, and passage of this legislation into law will help push the conversation around periods to the fore in schools statewide." 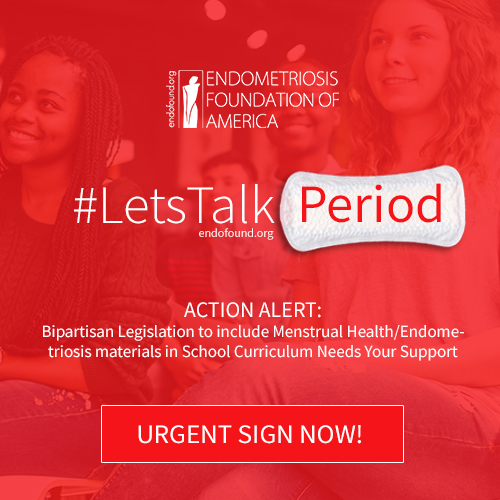